Before Lance Armstrong admitted to doping and Tiger Woods was busted for cheating on his wife, the sports world was rocked by the knee whack heard across the globe…the infamous Tonya Harding/Nancy Kerrigan scandal. Just when you thought it was dead and buried, a new biopic about the series of events leading up to the incident is set for release sometime in 2018 with Margot Robbie in the lead role.

Robbie was seen on set in a permed wig and distinctive 90’s garb, wearing high-waisted mom jeans and a sweater. The film will follow Tonya’s story depicting what happened that led up to the attack on Kerrigan in 1994 and just before the ’94 Olympic Games.

Kerrigan was attacked by Harding’s body guard Shane Stant hoping to break her leg so that she would not be able to compete in the Winter Olympics. Stant failed, only bruising Kerrigan, by hitting her in the thigh. Investigation into the attack showed that he was connected to Harding and her ex-husband Jeff Gillooly. Harding was later convicted on conspiracy charges and was given 3 years probation, 500 hours of community service and fines of $160,000.

This is the first sight of Robbie since her secret, low-key marriage to her long-time love Tom Ackerley in Australia this past December. Later confirming her nuptials with a post on Instagram. 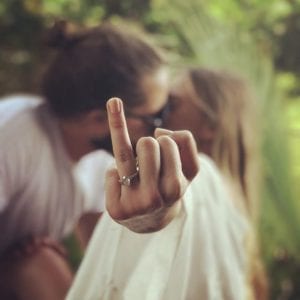 You can see Margot portray Tonya Harding when this film is released in 2018.