After a confrontation with a flock of sheep in the Lake District in England, Mission: Impossible – Dead Reckoning – Part One filming had to be halted.  Tom Cruise was seen watching the huge flock of sheep as they moved past him. In another scene from the upcoming film, Cruise was photographed in mid-air while he held onto a blue parachute.

While filming “Mission: Impossible – Dead Reckoning – Part One” Tom Cruise was interrupted by a flock of sheep. The seventh film is set to be released July 2023.

Cruise also had a recent confrontation with Lake District tourists. When Adam Wheeler and Lucy Hinch were walking their Siberian Husky named “Blitz” across the tundra, they came upon Cruise filming a movie set.

The Northern Echo reports that Cruise was more than happy to snap a photo with the couple before getting back inside of one of the helicopters being used on set. Wheeler told the outlet, “He was nice and polite and really humble. Tom Cruise apologized for the noise of the helicopters and asked if we were alright,” 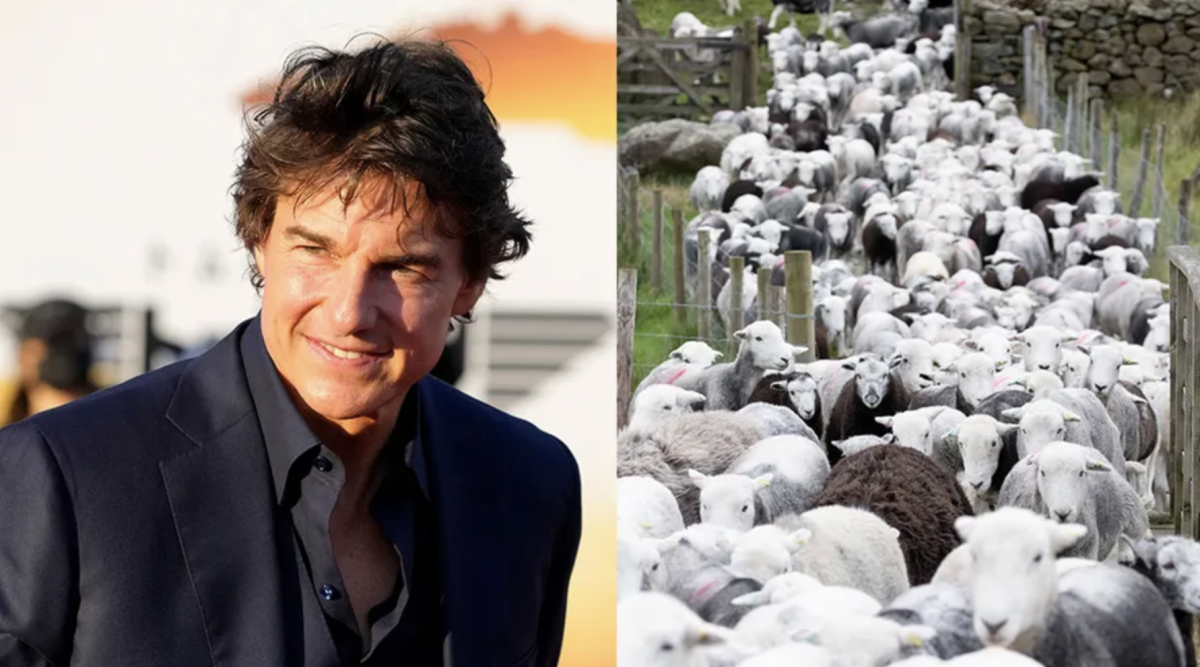 Due to a flock of sheep, Tom Cruise had to stop filming his yet-untitled “Mission: Impossible” feature.

“He was making sure everybody who wanted to, got their photos with him,” he continued. “We were the last ones to get his picture and then he just paraglided off the mountain back to his camp next to Buttermere.”

“I have seen a few of the Mission Impossible films but haven’t really watched many of his others – but I definitely will now,” Wheeler added.

According to Lecomte, Cruise was performing all of his own stunts and the two waited for about an hour before being able to meet him.

In the Lake District, Tom Cruise was seen paragliding from a helicopter. (Splash News)

The films are intended to be released as “Mission: Impossible – Dead Reckoning.” parts one and two. Filming on “Mission: Impossible 7,” was delayed due to the coronavirus epidemic, which is now expected to premiere in July 2021 with part two set for release in the summer of 2024.

Cruise is notorious for performing his own stunts, such as when he scaled the Burj Khalifa, which is regarded as the world’s tallest building.

In the past, Cruise has said that he would like to perform his own stunts. (Joseph Okpako/WireImage)

In November, the actor was photographed after he climbed out of the cockpit of a 1941 Boeing B75N1 Stearman biplane at 2,000 feet and sat on the wing.

IMF agent Ethan Hunt (Cruise) appears in a sequence from the 1996 film “Mission: Impossible” Cruise has played Hunt in all seven films.

“I am a very physical actor, and I love doing them,” Cruise said during an appearance on “The Graham Norton Show.” “I study and train and take a lot of time figuring it all out. I have broken a lot of bones.”

“The first time of any stunt is nerve-wracking, but it’s also exhilarating,”