Lets step into our nerd time machine and go back to July 18th 2008. In the last moments of Batman Begins Gordon shares with Batman that they had been dealing with a real psychopath who leaves a calling card. In that moment that they panned to the evidence bag with the Joker Card us Batman fans stopped breathing for three years waiting for what Christopher Nolan was going to bring to The Joker.

In the years to follow we waited to see who would be cast as The Joker, the only live action Joker most of us had seen at that point was Jack Nicholson in Tim Burton’s 1989 Batman. When it became widely known that Heath Ledger would be the Clown Prince of Crime the internet of course freaked out and dismissed Ledger as too young and pretty, they said he would never live up to the iconic work of Nicholson. Ledger would unfortunately not live to see the debut of the box off hit, he tragically passed away in January of 2008.

The Dark Knight shattered records its opening weekend, the hype around the movie was insane due in large part to Ledgers passing. A lot of Hollywood blockbusters that have super hype like this did tend to be a let down, The Dark Knight was one of the exception to that. Bale came back as Bruce Wayne after Batman Begins as an older more accomplished crime fighter. Rachel was replaced for the second film by Maggie Gyllenhaal who brought dimension  to a character that had fallen flat in the previous film. Aaron Eckhart played Harvey Dent who after losing his love becomes Two Face, his journey from golden boy of Gotham to Two Face was both tragic and riveting. After a fake out death we got to see Lt James Gordon assume the role we all knew he was destined for, Commissioner. And last but certainty not least we got to see Ledger in action, he brought a gravity to the movie that I don’t think anyone anticipated, even the people that hadn’t doubted him. In a movie meant to show the duality of each character The Joker showed Batman who he needed to be to defeat a criminal like him. He taught Batman that he wasn’t a hero, and in a moment of clarity after Dent’s death Bruce realized that could mean more than what the Joker had implied. The Joker was trying to tell him he was just one act of violence away from being just like them, to save the city from losing the hope that Harvey had brought he lets the world think he committed that act. He becomes the villain to save the city from losing a hero it so desperately needed.

After 2 hours and 32 minutes we all exited the theater feeling a bit lost, sad, and completely blown away. Bruce lost the love of his life, the hero ended as a villain while the villain was saved from being seen as such and continued to be a cast as a hero. Many were afraid that due to Ledgers passing that the Joker would be killed off, but Nolan left it very opened ended. You never even see the Joker apprehended by police, just left hanging while Batman goes to take care of Dent. Overall The Dark Knight set the bar for super hero movies, and in my opinion no one has yet to come close to it. Though many Marvel movies have passed The Dark Knight in a monetary sense, I don’t know that any comic book movie will ever be able to surpass it in a theatrical sense. While most comic movies that are as successful as The Dark Knight was need 5+ heroes or world ending bad guys, The Dark Knight was driven by brilliantly written and acted characters. Heath Ledger would go on to be posthumously nominated for both a Golden Globe and Oscar for his work as the Joker, he won both awards. 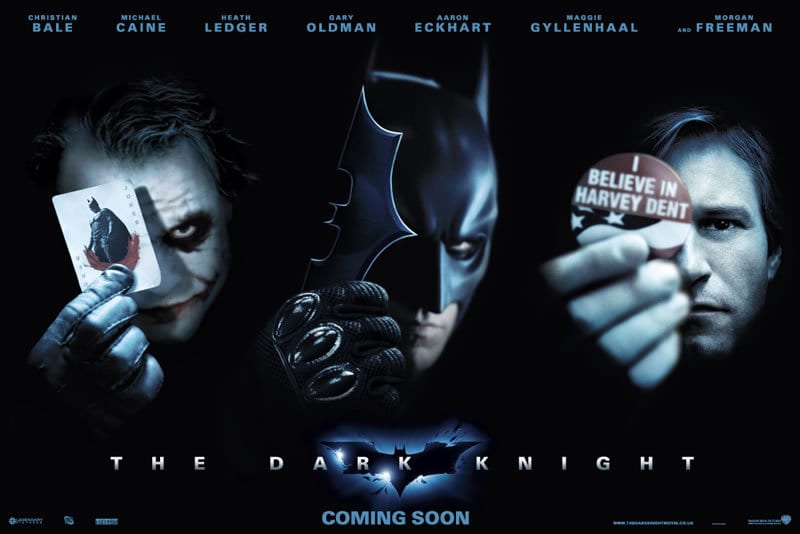