Today in 1999 The Blair Witch Project hit theaters and terrified and confused the world.

The movie about three college students in search of the answers to the mysteries of a Maryland town changed the way making movies was looked at. Found footage films were not a commercially successful venture at the time, so the shaky first person footage made the terrifying ghost story very real for a lot of people.  The movie that took $22,000 to make and only 8 days to shoot grossed an astonishing $240.5 million dollars, it held the world record for “Top Budget: Box Office Ratio”making $10,000 for every $1 spent.

The movie premiered at Sundance to rave reviews, their posters were missing posters with the cast, the marketing was so well done that there are still people out their that believe it is all true. The mother of Heather Donahue for months after the film received condolence cards and flowers for the loss of her daughter. The town of Burkittsville Maryland where the movie takes place has a total population of 151 people. Fans of the film often make the pilgrimage to the small town to venture through the woods, the towns welcome sign has been stolen countless times since 1999 including on the night the film premiered. The following year, riding the crazy success of the film a sequel was made Book of Shadows: Blair Witch 2, it has an 18% audience rating on Rotten Tomatoes…I will let let that speak for itself. 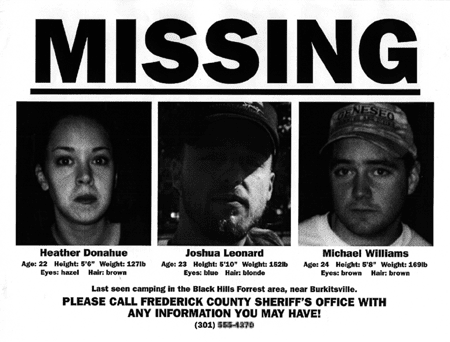 The legends goes, an old man who lived in the woods abducted 7 children and killed them all for the old woman ghost who lived in the woods. He turns himself in and confesses in detail, shortly after is hung. The final scene of the film is one of the most haunting ends to a horror movie, you see nothing but Mike standing in the corner as Heather screams his name until the camera drops the implications being that like the murdered children Mike was made to face the corner while Heather was killed. 17 years later this movie still invokes fear and always appears on scariest movie lists. A third movie is coming out this September it looks like a homage to the original but with updated cameras! Still full of shaky cameras and jump scares galore! Love it or hate it The Blair Witch Project defiantly changed how horror movies could be made! So if you are feeling brave today watch the original and try and remember what it was like seeing it for the 1st time.