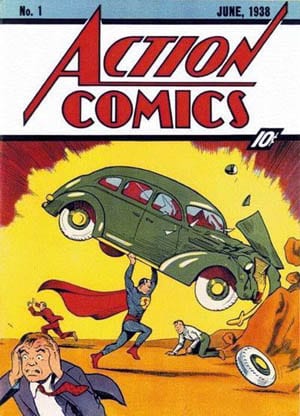 This comic is what many consider the dawn of the superheroes, and is the most valuable comic in the world. In 2014 a copy sold on E-bay for over 3.2 million dollars. The Man of Steel has sparked the imagination of people world wide for 78 years. Since his first appearance in the comics Mr. Kent would go on to appear in  comic strips in news papers, a radio show in early 40’s, television shows, movies, and just about anything you can think of I’m sure.

Much like many of the heroes that have been around for 70+ years many people have worn the S since the beginning. Supergirl is Clark’s cousin from Krypton her real name is Kara Zor-El, she first appeared in Action Comics # 252 in May of 1959. She is powerful and very often under estimated because of her bubbly personality. Supergirl now has her own TV show which will be switching networks for its second season. Another notable hero that wears the S is Superboy, he is clone of Superman and Lex Luthor. He assumes the identity of Conner Kent and is adopted by the Super family. Conner is a member of the Teen Titans and appeared in Young Justice, he has always been a close friend of Robin both Dick Grayson and Tim Drake. His temper gets the best of him, but he is good and proves it often. Plus he does Super with style, oh ya I’m looking at those sweet sun glasses and leather jacket. (I love you 90’s Superboy)

Superman has had three significant love interests throughout the years, though the only one I personally count is Lois Lane! Lois has been around since Action Comics #1, she spent decades being in love with Superman and super brutal to Clark not knowing they were the same man. In the late 80’s it was finally reveled that they were one in the same and the two were married in 1996! Another love for Clark Lana Lang, if Lois is Clark’s true love Lana was his first. They were both from Smallville and it some iterations were high school sweet hearts. Though she doesn’t end up with Clark she ends up with his best friend and names a child after him…creepy much? The last and most recent love interest for Clark/Superman is Diana Prince, Wonder Woman herself. Though I assume Superman is only attracted to woman with alliteration in their names he broke that mold with Diana…unless you count Wonder Woman! When the New 52 reboot happened they erased all of Lois and Clark’s history. She doesn’t know he is Superman they are just co-workers. This opened Superman up for a super relationship with Wonder Woman.

No matter where the Rebirth takes Superman I will follow. For 78 years he has inspired people to be be the best at what ever they are doing and to do it with dignity. Superman’s motto for so long has been truth, justice, and the American way. I think he has transcended that, he stands for the best in humanity. He was introduced at a time when American needed hope, after an economic collapse, a war looming, and the mobs heavy grips on everything. American needed something great, two men from Cleveland delivered that! If everyone took a page out of Superman’s book and was a tad bit more compassionate and brave the world would be a better place.