He’s been beaten, bullied and burned. And that’s just the beginning of his story!

Horror fans across the world are raving at the fact that we are going to be getting an inside look at the story of Kane Hodder, the legendary stunt man who is best known for his spectacular performance as Jason Voorhees in four of the Friday the 13th movies.

The life and career of this horror legend will be explored in great detail in upcoming documentary To Hell and Back: The Kane Hodder Story. Although we do not currently have a release date, we do have an official poster for the film. 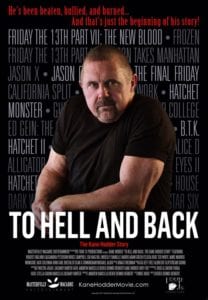 To Hell and Back is a harrowing story of a stuntman overcoming a dehumanizing childhood filled with torment and bullying in Sparks, Nevada. After surviving a near-death burn accident, he worked his way up through Hollywood, leading to his ultimate rise as Jason Voorhees in the Friday the 13th series and making countless moviegoers forever terrified of hockey masks and summer camp.

After decades of watching Kane Hodder on screen, get ready to meet the man behind the mask in To Hell and Back – a uniquely human story about one of cinema’s most vicious monsters.

Masterfully Macabre Entertainment will present both domestic and international premieres and bring the highly anticipated documentary to audiences around the world.

Hodder is not only well known for delivering the role as Jason Voorhees with the perfect touches of suspense and terror, but for the amount of pure fun and enjoyment he has in the role itself off camera.

Spectators from the film Jason Takes Manhatten recall how Kane would just stop and stare at those getting close to the film set, just like Jason did with his victims in the movies.

Bottom line, Kane Hodder is the best and you should absolutely check out this film.

Home » Featured » ‘To Hell and Back: The Kane Hodder Story’ Gets A Official Poster!