It was scary for Titans fans for a while there. When DC Universe was shut down as a streaming service, we had no idea where the show would end up. Luckily, Titans found a new home on HBO Max. Now the final season 3 episode is being filmed! We’re ready for the Titans to come back!

Season 3 is looking like it might be the best season so far. We know characters like Barbara Gordon and Scarecrow will appear, and that Jason will be making the shift to becoming Red Hood.

Most of those elements will show up in the first few episodes, too, based on the leaked season 3 episode titles. Those leaked titles gave us a really good idea of what to expect from the season when it arrives.

You can check out the image for yourself down below. I’m also including a link to his Instagram since we’re having trouble embedding Instagram posts. If you want to check out his Instagram, click this sentence! 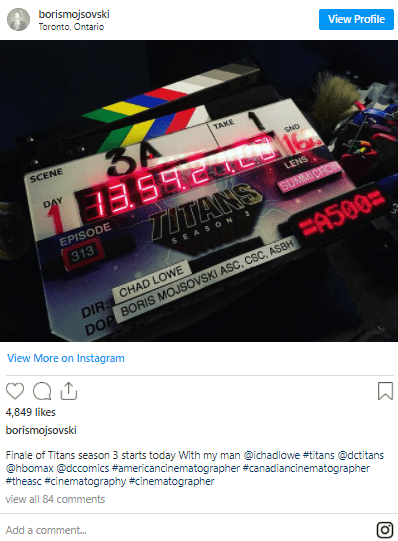 There’s almost nothing known about the season finale, but Greg Walker, showrunner, did answer some questions about season 3 last year. It was during DC’s FanDome during the fan Q&A. The quote comes from the FanDome but we found it on ComicBook.com.

“This is how this season is going to be different, I think in a lot of ways. It ultimately ends with them figuring out a way as a team. It ends optimistically,” Walker said. “I that the world that we live in right now. Especially the way the Titans can be, we kind of beat ourselves up for our past sins. It’s nice to be liberated. We have a character named Dove who is going to point in the direction we’re going to go. It takes them a long time to follow her advice. Ultimately finding a way to get off the hamster wheel. To stop doing things the way we’ve always done them and find a new way. That, they have to figure out how to do collectively.”

Just for good measure check out the official description for the show below.

“In this action-packed, live-action series, Dick Grayson, aka the former Robin (series star BRENTON THWAITES), emerges from the shadows to lead a band of new heroes – including Starfire, Raven, Beast Boy and others. DC UNIVERSE’s first original series follows this group of young heroes as they come of age and find belonging in a gritty take on the iconic Teen Titans franchise. In the groundbreaking first season, Dick meets Rachel Roth aka Raven (series star TEAGAN CROFT), a young girl with special abilities brought on by a mysterious darkness inside of her that she struggles to control, and together, they find themselves embroiled in a conspiracy to bring about Hell on Earth. Joined by the mysterious Kory Anders aka Starfire (series star ANNA DIOP) and loveable Gar Logan aka Beast Boy (series star RYAN POTTER), these lost and disparate individuals become a surrogate family to one another and a team of heroes for the world.”

Are you as excited for Titans season 3 as we are? Let us know in the comments!