There’s a lot that we as Game of Thrones fans just accept without question. White Walkers, incest, dragons, and crazy shadow babies to name a few, but for some reason this season there’s one thing that many fans are having trouble accepting: time. When HBO announced that season 7 would be a shortened season of seven episodes followed by season 8, which would have 6 “movie length” episodes, it was pretty evident that things were going to have to move a lot faster than fans were used to, but it’s been pretty jarring to see just how quick.

Travel time between places is starting to feel like whatever the writers need that episode. #GameOfThrones

Is everyone in Westeros teleporting now? People are getting across the Seven Kingdoms in two seconds instead of two seasons. #GameOfThrones

Man, the ravens in Westeros must have upgraded to Amazon Prime. #GameOfThrones

This season we’ve seen people traveling multiple distances in one episode that would have taken them half a season to travel in the past and Ravens are flying across Westeros like they’ve got jetpacks for wings. The bright side to this is that the episodes are packed full of spectacle, action, and plot, but the hang up is that it’s going against everything that we were ingrained to embrace about Game of Thrones in previous seasons.

Fans grew to adore the rich conversations that our characters would have on their travels and the insight that they provided to their motivations and the show’s mythology. That weighty sense of drama isn’t really a thing anymore and season 7 has been struggling a bit with giving enough attention to the subtleties of the characters.

An example of this would be the conversation Tyrion and Jamie had in “Eastwatch”. It cut away before the two could really get into the meat of that conversation. What did Tyrion say to Jamie that made him even consider approaching Cersei about it? Did Jamie not have more to say to Tyrion about him killing their father? There was so much more we needed and wanted to see here that there just wasn’t any time for.

In addition to the pacing’s effect on the plot, it is also starting to encroach on plausibility as well. In this past week’s episode “Beyond the Wall” we saw Jon and his band of merry men venturing past the wall in search of a wight, but when trouble arises he sends Gendry all the way back to Eastwatch to send a Raven to Dany in Dragonstone so that she could fly North of the Wall and save them. There really was no clear indication of what the passage of time was during the episode, but the consensus was that it was inexplicably ridiculous.

Sure, these are fictional characters traveling fictional distances in a fantasy show, but the concept of time is pretty commonplace logic for viewers. It’s something that’s easily latched onto because again, in this world of flying dragons and undead killers, time is one thing we do know and understand. With the firm rules of time being bent, it’s harder to feel the danger our characters are in as things are just happening at a pace that’s super convenient to the story, such as Dany coming in to save the day.

Alan Taylor, who directed “Beyond the Wall,” briefly spoke on how the production team approached the timeline while filming the episode and what their take was on just how long Jon and his squad sat on that rock.

“We were aware that timing was getting a little hazy. We’ve got Gendry running back, ravens flying a certain distance, dragons having to fly back a certain distance…In terms of the emotional experience, [Jon and company] sort of spent one dark night on the island in terms of storytelling moments. We tried to hedge it a little bit with the eternal twilight up there north of The Wall.

I think there was some effort to fudge the timeline a little bit by not declaring exactly how long we were there. I think that worked for some people, for other people it didn’t. They seemed to be very concerned about how fast a raven can fly but there’s a thing called plausible impossibilities, which is what you try to achieve, rather than impossible plausibilities. So I think we were straining plausibility a little bit, but I hope the story’s momentum carries over some of that stuff.”

However, at the end of the day, I think that we can all agree that the timeline and pacing don’t affect our overall enjoyment of Game of Thrones. We’ve been getting some amazing episodes this season and the quick pace has allowed for quick payoffs, which creates the moment that makes you jump out of your chair and then sit back down knowing something epic will probably happen next week too. I can’t be the only one that would gladly put logic aside to watch Drogon come and save Jon’s ass rather than watch him freeze it off for three episodes waiting. 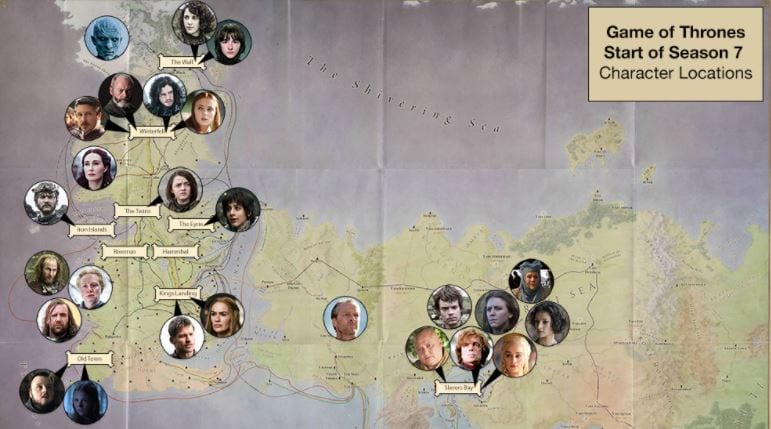 There’s nothing wrong with recognizing that the writers are manipulating what you know about time and travel for the sake of plot, you’re a Game of Thrones fan and that’s what you are meant to do! Alan Taylor also had something to say about this as well.

“It’s cool that the show is so important to so many people that it’s being scrutinized so thoroughly,” he said to  Variety magazine. “If the show was struggling, I’d be worried about those concerns, but the show seems to be doing pretty well so it’s OK to have people with those concerns.”

I think we can all agree that it’s been a wild ride so far in season 7 and it’s only going to get crazier. Game of Thrones is doing the best it can with the episode limitations it has and with next season’s episodes being movie length, I think that we can expect to see a much better balance between the slower paced Game of Thrones we loved and this bonkers and action packed season we are currently having.

More on Game of Thrones: