Happy ‘Throwback Thursday’ everyone!! We are getting ever so closer to Friday, I don’t know about you… but I feel as though this week has been flying by. Which, I am totally okay with, for the record.

Today’s ‘Throwback Thursday’ takes us all the way back to the 1960’s! I was driving into work last night when I saw this purple (yes, purple) Volkswagen Beetle and the child in me instantly thought of my favorite Volkswagen Beetle ever, Herbie! 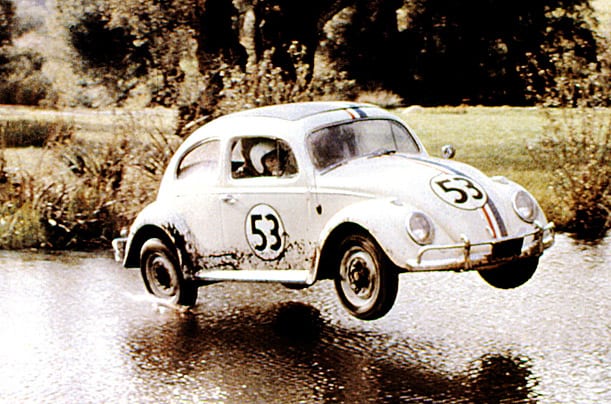 ‘Herbie’ aka the Love Bug was a 1963 Volkswagen Beetle, who was featured in multiple Walt Disney films. His first appearance was in the 1968 film The Love Bug. You know when people say sometimes things have a mind of their own? Well, Herbie literally did. He is extremely capable of driving himself, and he is an extremely competitive little guy. Herbie is distinguished by red, white and blue racing stripes painted down his body; along with the number ’53’.  One thing that stood Herbie apart from the rest (you know, aside from the whole coming to life thing) was the special bond that he shared with his owner, Doug.

Some of the other movies featuring our buddy Herbie are Herbie Rides Again (1974), Herbie Goes to Monte Carlo (1977), Herbie Goes Bananas (1980),  and Herbie: Fully Loaded (2005). Herbie was also featured in a 1997 made-for-television rendition of The Love Bug in which we learned about the German Engineer who build Herbie and his origins were explained.

Check out the trailer for the original film below: