Do you know the origin of the phrase “Don’t open, Dead inside”? 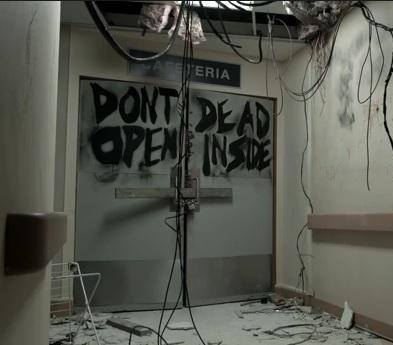 No? Well why not?

It was originally thought that the words were written in the hospital before it was abandoned. Probably when half was full of the dead, and the other half still had the living being treated. It seemed to be a warning to the living that had inhabited the hospital for a while after things became worse and let it overrun and abandoned.

The Walking Dead: Survival Instinct game does include a scene when Daryl and Merle spray paint the “Don’t Open Dead Inside” sign on the doors.

But since Daryl and Merle are both not in the comics, this isn’t a widely accepted truth to the hauntingly painted words. TellTale’s The Walking Dead is the video game that ties mostly to the comics.

There is another theory though, and you can find it in the Walking Dead webisodes AMC released. Check out The Oath at AMC to get the whole backstory.

Trust me, this is an origin story that you don’t want to miss!