Thor Odinson now has a very faithful new friend at his side! Who doesn’t love a pup? Thori is a dark and sinister, yet silly and fun talking dog. He was actually raised by Thor’s half brother Loki, but has been with Thor since Odinson’s journey to find a new hammer. He’s been there for the entire War of the Realms storyline.

In Thor #2, Thor tries to end the war again and he ends up joining his brother Loki, their dead brother Balder, and Skurge The Executioner in Hel. They try to stop the Queen of Muspelheim as she tries to regain control of the death frozen realm. The reunion doesn’t last long, and unwelcome firepedes quickly tear the brothers apart.

The heroes and fire demons battle it out, and of course Thori jumps in right when he’s most needed! The brawl turns dogged and the writers took the opportunity to insert a pop culture reference from none other than Oprah. Remember “You get a car, you get a car!” 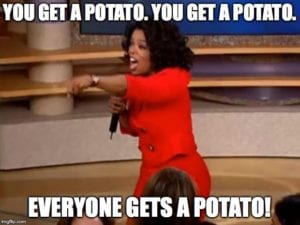 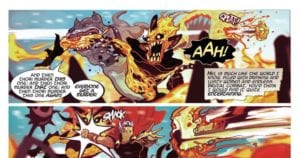 His final line really drives home what the writers were trying to do here: “Everyone gets a murder!”

He’s very spirited, isn’t he? Although those who received his “gifts” were probably not as thrilled as Oprahs guests were, but to each his own.