So, the Pearson Family holiday mantra is “nothing bad happens on Christmas Eve.” As faithful viewers of This Is Us we are constantly lost in an emotional haze on a weekly basis. We’re searching dearly for some sort of sign that everything will be okay, but deep down we know that this show is just too real to always have a happy ending…but maybe tonight it will.  Then just ahead you see something. It’s neon and it’s flashing and you feel yourself getting excited- it looks like you’ve actually made it to the end without some heart wrenching twist. Victory! They were right, nothing bad happens on Christmas Eve. You finally get close enough to read it and it says:

“Something Bad Will Most Certainly Happen on Christmas Eve.”

Here are the top 5 moments from ‘Last Christmas’:

5. Kate and Rebecca’s Relationship Get Explored 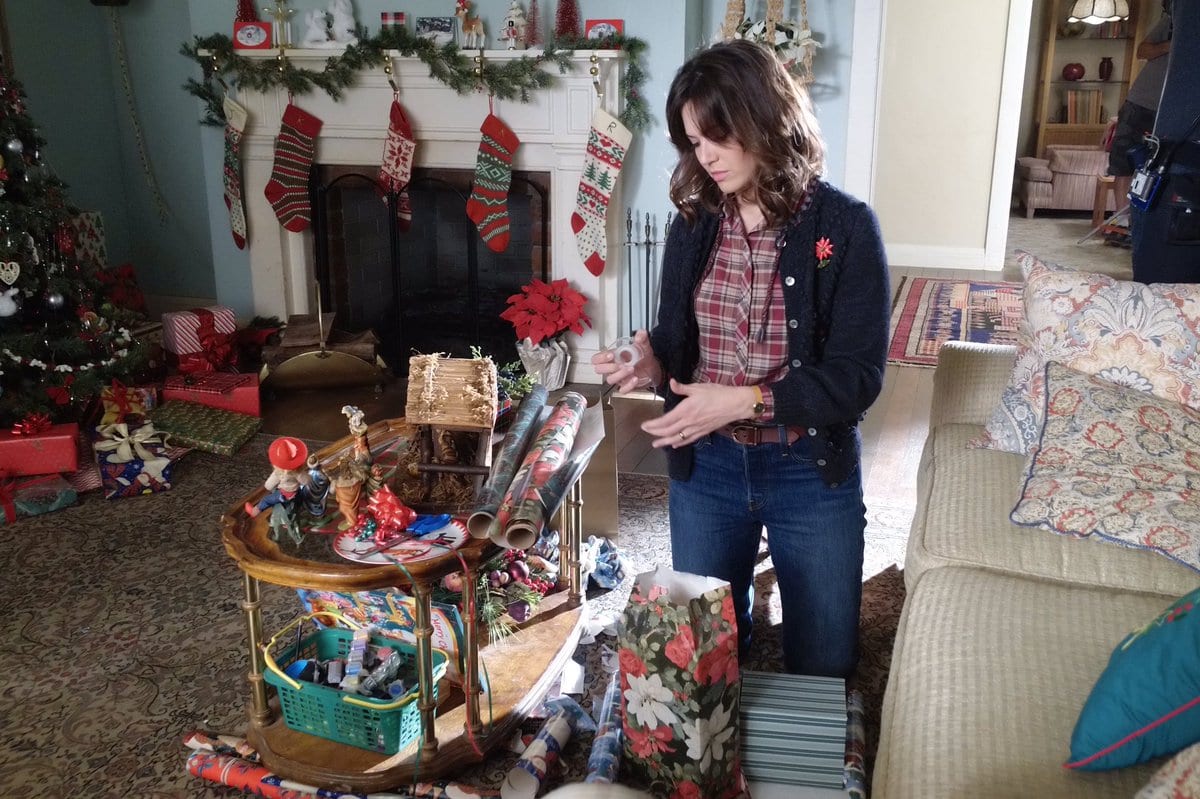 A few weeks ago, Kate hinted that her and her mother didn’t really have a close relationship while she was growing up. We’ve seen little seeds being planted throughout the flashback scenes with Rebecca trying to navigate how best to handle Kate’s weight. Kate has also openly admitted to resenting how perfect and beautiful her mom was and the insecurities that instilled in her.  I remember when this relationship rift was first mentioned I was super interested to see them interact in the present day and hopefully learn more about how it got to such a standstill.

We ended last week’s episode with Kate barging into Thanksgiving at the worst possible moment to announce that she had decided to get gastric bypass surgery. This week opens during a flashback where 8 year old Kate is complaining about a stomach ache while the family is getting ready for Christmas Eve mass. Rebecca tells her that it’s probably because all of the cookies that she tried to stealthily get away with eating earlier. Turns out though that she has appendicitis and has to have surgery. While in the hospital, Rebecca comforts a scared Kate by giving her a piece of garland to hold on to and tells her for the first time that “nothing bad happens on Christmas Eve.”

We find these two together again in the present day at a consultation for Kate’s upcoming gastric bypass surgery. It’s very clear that not much communication has occurred between them recently as Rebecca didn’t know that Kate had been on Prozac or that Kate still binged occasionally.

Despite the rift, Rebecca is still concerned about the health risks the surgery possesses. On their drive home the tension is thick and awkward. All of the revelations from the meeting prompt Rebecca to ask Kate “Did I do this to you?” and Kate honestly answers, “I don’t know.”

For such a short scene it was so impactful and emotional. There’s clearly so much history and resentment between these two and I thought that this was a lovely start to the exploration of their relationship.

Last week Kevin told Olivia that she was an empty shell of a human. So of course, she has ran off and ditched the play that they were supposed to star in. Without their leading lady Back of an Egg  was cancelled leaving Kevin without a job and Sloane (the playwright who he slept with last week) without the joy of seeing her words come to life.

To make matters worse she has to go to Hanukkah dinner with her family with no successful play to show off. If only there was something else she could bring to dinner to show off? She forces Kevin to come to dinner to make up for ruining her play and pretend to be her boyfriend. If this plot sounds familiar that’s probably because you saw it on The Man-Ny…twice.

While at dinner, Sloane’s given the task of telling the story of the Maccabees. Her performance is amazing filled with humor and poise. Riveted by her performance Kevin decides that the show must go on! “Screw these producers, we can put this play on ourselves,” he says in the middle of her story. Kevin decides that he will fund Back of an Egg with his own money  on the condition that Sloane steps into the lead role. She agrees and they adorably make their way over to Randall’s for Christmas Eve.

Sloane > Olivia. No other way to put that. I love Kevin and Sloane so much more than him and Olivia. In just one dinner Sloane already inspired Kevin more than Olivia ever did and she did it without making him feel like a piece of crap. I hope to see more of these two together, but alas can we even enjoy it knowing that Olivia will inevitably show up and ruin it all?

Who doesn’t love Dr. K? He delivered Kate and Kevin and gave Jack that incredible speech about how even the most sour lemon can make something resembling lemonade. The speech that led Jack to Randall and changed the Pearson family forever.

Well, after 8 years we don’t meet Dr. K on the greatest of circumstances. Rebecca finds him in a hospital bed while she was getting snacks for everyone waiting on Kate. He tells her that he was in a bad car accident on the way to the airport to see his family in Montana. He doesn’t have much time left as whatever surgery they could perform on him to save his life would be too risky considering his age and injuries and he wouldn’t make it out. None of his family will be able to make it in time. Rebecca decides that they will be his family for the night while Kate is in surgery.

Randall wants to do something for Dr. K too. He buys him a snow globe in the gift shop with the Christmas money he has saved. He gives it to Dr. K as a thank you/get well soon gift and it is the sweetest thing. Dr. K reminds him that all he did “ was nudge a man in a direction he already wanted to go.” He accepts the adorable gift from Randall and advises him that one day when has a chance to do good, he pay it forward (aka forgive his mother).

Well this one was a surprise wasn’t it? Denis O’Hare finally made his awaited appearance as a friend from William’s past. Those who assumed that he would be involved in his addiction story line were correct but as it turn out William has a couple more secrets up his sleeve.

We find William at a Narcotics Anonymous meeting on Christmas Eve when one of these secrets turns up. It’s Jessie, someone that William clearly left behind when he went to live with Randall. Now, initially I thought these two had been on a friendly journey of recovery together and when Randall left, Jessie went back to his old habits. This is all true, except for the fact that he didn’t just leave his friend Jessie…he ghosted his lover Jessie. And they say old people aren’t with the times.

Jessie’s clearly upset and holding onto a lot of anger but first and foremost wants to know how William’s health is doing. It leads to this beautiful exchange.

William: I shouldn’t have run off

Jessie: Why did you?

William: I wanted to spare you

Jessie: William Hill, I loved you and you left. Now I’d like to spend whatever time you have remaining together.

The two go to Randall’s for the Christmas Eve gathering where Jessie gives William a very telling back rub as he plays the piano. Well not telling to Randall. Telling to his daughter though who matter of factly tells Randall that William is “either gay or bi,” leaving Randall to just stare at his father with the most astounded smile on his face. He still has so much to learn about his father, and unfortunately not much time to do it.  (Please let William have a miraculous recovery and never leave us! PLEASE!)

What a roller coaster they took us on with Toby this week. I could not keep my emotions in check! I was surprised, skeptical, happy, excited, nervous and devastated all in the span of 10 minutes. Now if you’ve read my recaps before then you know that I’m not a huge fan of Toby. I always felt that he was overbearing and pushy instead of being a partner and supporter.

So when he randomly showed up at Randall’s I was like “oh here we go again.” More of Toby being Toby when Kate is asking for some time and space. That’s not what we got at all though. Toby admits to Kate that he can live without the cookies, but he can’t live without her. It’s enough for her to open her heart up to him again and give it another shot. And what’s a reconciliation without a quickie in your brother’s house? Well, don’t ask Toby and Kate.

Nothing bad happens on Christmas Eve? It’s This Is Us, of course something does! To make it worse we have to wait until January 10th to find out Toby’s fate. My take on it is that Toby will be alive, but it will be just the scare him and Kate both need to finally get on track and stay on track. But to play devil’s advocate on myself, creator Dan Fogelman has not been shy about saying that this show is about real life and sometimes people just die (i.e. Jack). So maybe while Dr. K survived unexpectedly, Toby died unexpectedly.

This Is: The Rest

This Is: Most Talked About Scenes

William is confronted by the man he left behind.[embedyt] https://www.youtube.com/watch?v=_0Db2TJLAmM[/embedyt]