In a family TV drama no relationship is safe. It’s been a pleasure watching Randall and Kevin unwrap the many layers of their complicated relationship, but something’s got to give right? Another relationship will have to suffer as this one gets repaired it’s just a matter of when. Well, just so happens that Thanksgiving is here for the Pearson clan and things are about to go down. Beth discovered William and Rebecca’s secret in the last episode and with that big of an elephant in the room on the most stressful family holiday of the year, nothing good can happen.

Let’s dig in to our Pearson 5, where I recap what each character was up to this week as well as my thoughts. A Final Thoughts section on the overall episode is at the end of the recap as usual! Happy Reading!

This week everyone was basically together in both timelines so I will be grouping them accordingly.

The Pearson’s are all together this week in the flashbacks and their Thanksgiving from this episode memorializes traditions that take place throughout the present story line.

Rebecca kicks off Thanksgiving morning by preparing her famous cranberry sauce with a side of pressure to impress her mother and outdo her sister’s perfect potato casserole. She’s a little on edge, so when Randall and Kevin come in roughhousing with their nice outfits on and start complaining about not wanting to go to Grandma’s for Thanksgiving she becomes further stressed out. Although, Randall has the right to not want to go because apparently every year Grandma always wants to take a picture of “just the twins.” Rebecca promises to say something to her mother…again.

Jack’s also not really feeling Grandma’s house this year. He had always envisioned making their own Thanksgiving traditions as a family after his parents passed away, but hasn’t had the opportunity to do so yet. Despite these feelings he is still ready to make Rebecca happy. He’s got road trip snacks and Paul Simon, all the kids have to do is make one final bathroom run before they leave.

Of course, on their way back into the kitchen Kevin and Randall run into Rebecca sending her cranberry sauce flying all over the floor and their nice clothes. Solid start for the Pearson clan.

The “fun” continues as they get a flat tire on their way, leaving them stranded on the side of the road with the only help a 3.4 mile walk away. They begin their trek to the Pinewood Lodge where along the way Rebecca learns that none of the kids want to celebrate Thanksgiving when they are older because they hate celebrating it now at Grandma’s. They don’t like how their mom is always stressed out and talks in a high pitched voice.

Once they make it to the rest area, their sentiments sit with Rebecca as she tells her mother off on the phone after a fight ensues and cancels their trip to Grandma’s in lieu of a night at the Pinewood Lodge since the tow truck isn’t coming until the next day.

When they go to check into a room the man at the front desk is wearing a pilgrim hat pretending to be “Pilgrim Rick.” It’s actually quite creepy. They make it to their room where the furnace is stuck on high with

only some cold hot dogs, cheese, and saltines from the restaurant for food. Everyone is down in the dumps and Jack immediately knows what to do. He leaves and later returns as Pilgrim Rick telling goofy stories while wearing the hat from the guy at the front desk. They roast their hot dogs in the furnace, wrap them in cheese, and dunk them in crushed crackers and settle in to watch Police Academy 3.  They also go around and say what they are thankful for by pulling apart the yarn on Kate’s itchy sweater and then throwing it to the next person.

Out of The Big Three, Randall is clearly the most into and excited about Thanksgiving. Or perhaps he is just excited about the fact that his mother and his biological dad will be eating together at the same table. He’s running around the house at 6:30 in the morning waking everyone up and giving them jobs for the day.

Kevin isn’t able to do his job right away as he has to go pick up Olivia who he invited to Thanksgiving dinner. She initially didn’t want to hang out in New Jersey with the wonder bread family, but after Kevin informed her of how very wrong she was, her intrigue outweighed her stubbornness.

William is on turkey day observation duty as he is not doing very well. Feeling defeated about his inability to help, Beth fills him in on how a Pearson Thanksgiving is full of weird traditions and that he is in for a while ride. However, her attitude quickly goes sour when Rebecca and Miguel (who Kevin gives quite the side eye to) arrive. Rebecca has been ignoring her calls since Beth found out about the William secret and Beth refuses to lie to her husband anymore. She informs Rebecca that she has to tell Randall today or Beth will.

The family embarks on their first tradition of the day: a 3.4 mile hike. It gives everyone some good chances to talk. Rebecca asks Kevin about his play, but has forgotten the title even though she’s been told before. This seems to be a set-up for some sort of health issue down the line for Rebecca. Hopefully much further down the line. Kevin and Olivia eventually break off where she tells him that one of the reasons she hates Thanksgiving is because her father always left before dessert to be with his mistress. Our sweet Kevin takes note of this.

William (who honestly should not be on a 3.4 mile hike in his condition) has to take a rest with Randall. He tells Randall about his Thanksgiving tradition of listening to these old recordings of him and his friends playing some good music. Our sweet Randall takes note of this.

When they make it back to the house it’s time for tradition 2: Police Academy 3. Randall says that he has an errand to run but he will be back in time for dinner. While the group is watching the movie, Kevin finds Olivia with a piece of pie in hand. He tells her that no matter what she will make it to Thanksgiving this year. Her features immediately soften.

Miguel interrupts the moment by asking Kevin if he could wear “the hat” this year, referring to the pilgrim hat that Jack wore in the flashbacks. Kevin tells Miguel that ever since Jack died him and Randall switch off and he doesn’t want to break that tradition. Miguel is visibly upset and something about this interaction upsets Olivia who chooses this moment to realize that she cannot be the person that Kevin wants to be. She calls and Uber and heads outside where she finds William on the front stoop.

Olivia straight up asks William what it feels like to be dying. He gives her a sideways glance 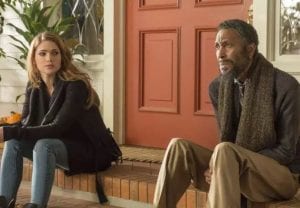 before responding. “It feels like all these beautiful pieces of life are flying around me and I’m trying to catch them. I know it feels like you have all the time in the world, but you don’t. So quit trying to play it so cool. And when a nice boy who adores you offers you pie, say thank you.”

Olivia takes in William’s advice, cancels her Uber, and goes inside and kisses Kevin. Seeing her step out of her comfort zone clearly strikes a chord with Kevin who later in the evening allows Miguel to be Pilgrim Rick. Now I am by no means a Miguel supporter, but it was sweet seeing just how happy he was to be included.

Meanwhile, Randall is at William’s apartment trying to find his old recordings for him and we all know this won’t be good. He comes across an old photo of him and a letter written to William by his mother. Not good.

He returns just in time for dinner including Tradition Three: Cheesy Hot Dogs covered in saltines and Tradition Four: The What I’m Thankful For Yarn Game. Rebecca goes first by quoting what Jack said that very first Thanksgiving they celebrated like this, something she has said every year.

Sensing Randall’s mood shift she throws the yarn ball to him next. He chooses to forego his answer and instead confronts Rebecca about how a letter from her could have ended up in William’s apartment. He is oozing with anger and won’t even give her the opportunity to defend herself. Their close relationship is falling apart right in front of everyone’s eyes as Randall realizes that she has been lying to him for 36 years and kept something from him that he so desperately wanted as a child- knowing where he came from.

“I can’t even look at you,” he says as he storms away from the table leaving Rebecca in tears and the rest of the family in shock.

This is the moment when Kate, who had been traveling all day to get there in time busts in and announces that she will be getting gastric bypass surgery. One of the many decisions that she made that day including finally breaking up with Toby so that she can focus on herself and her weight loss journey.

Olivia looks to Kevin after all of this drama and simply says ““Your family is amazing.”

Feel like rehashing the drama? Watch the video below to Randall’s confrontation to Rebecca.