Let’s be honest, the scene at the Dragon Pit in this past Sunday’s season finale was stressful AF. Even though the circumstances that brought them together were a little silly, I don’t think a single fan was complaining about finally seeing all of their favorite characters on screen together! Some of these characters had never interacted before, while others hadn’t seen each other in seasons or even since the pilot. It was every Game of Thrones fan’s dream and it was totally epic. 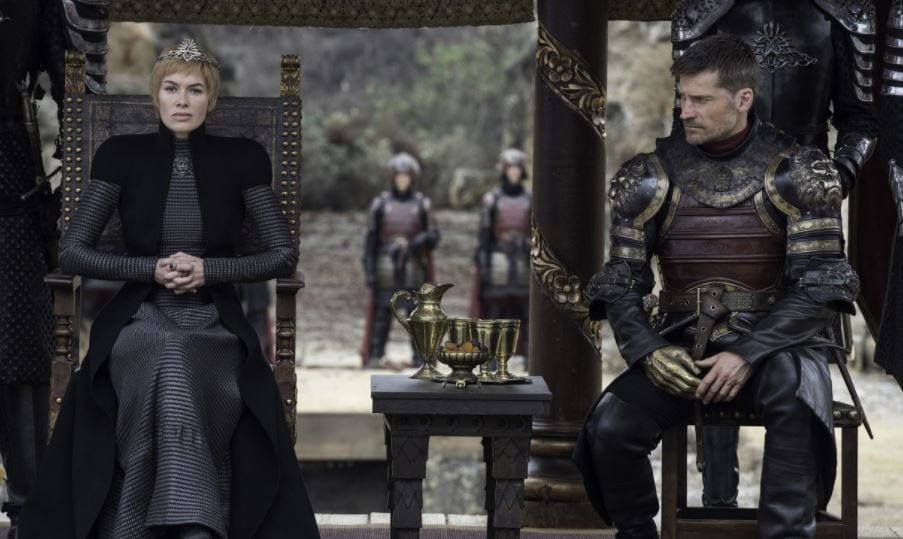 In the behind the scenes featurette on HBO’s website, they spent a couple of minutes showing just how exciting it was for the cast to all be together as well. It will make your heart burst seeing how much fun they were having.

“Having been isolated for so long and then suddenly ‘boom’ I’m working with everybody, it was quite kind of an event for me. I loved it!” -Kit Harrington

Kit had spent almost all of his series arc completely isolated from the main cast. He hadn’t seen Cersei (Lena Headey) since the pilot episode.

“It was lovely. It’s all of us being together so we’re all kind of *excited wave*” -Lena Headey

“That was really exciting because we are all just a big happy family and that extended to after work, unfortunately, because we had way too much fun.” -Peter Dinklage

Nikolaj Coster-Waldau (Jamie Lannister) will mirror this sentiment of just how much fun the cast had after the camera stopped rolling.

Just look at how happy the Hound is!

You know usually on set you have one or a couple other actors to hang out with but to have 10 or 15 of us at the same hotel – it was just a disaster, but it was fun though.” -Jamie

How much would you pay to stay in the hotel that the Game of Thrones cast was staying at?

Having been so invested in the show for so long for so many years, it was just so thrilling. I was personally excited to meet Daenerys.” -Gwendoline Christine

Gwendoline fangirling over the show that she is on will never get old.

Also, this shot of her tickling Davos’s beard probably won’t either.

“I hope for the fans that they see a satisfying realization of what they’ve all been waiting for…for these worlds to collide.” -Emilia Clarke (Daenerys Targaryen)

Even showrunner D.B. Weiss was completely moved by the experience.

“Those 10 days were 10 of the most enjoyable days I’ve ever spent doing this show. It’s all these people having such an excellent time just being in each others company…”

Check out the whole video here!

Need more Game of Thrones in your life at the moment? Check out some of Fan Fest’s other coverage!