Ever since The Flash returned from its midseason finale, the focus has been on averting Savitar’s murder of Iris. And whereas this is certainly a dire prediction in its own right, it actually neglects the other 2/3rds of Savitar’s prediction.

“One Shall Betray You

One Shall Suffer A Fate Far Worse Than Death!”

Well it looks like the God of Speed has returned – or is about to – so it’s as good a time as any to take a look at three plausible answers to these questions. The following theories run the gamut from blatantly obvious to well-crafted twists. Which is correct? We’ll know in a few weeks, but for now… let’s theorize!

From a strict ‘they said/ showed it’ perspective, we already know the answer to these. Iris is going to die and Caitlin will betray. Pair this with the Caitlin vs Cisco fight and Cisco could suffer a fate worse than death by taking out his closest friend. As H.R. warned, ‘you’ll meet your destiny on the path you take to avoid it’ and this season has certainly been about these fates trying to be avoided. Though there is a major problem with this theory, it’s too easy!

Whereas the show did a great job making Caitlin’s potential turn in “Killer Frost” seem believable, since then we’ve gotten numerous displays of how strong Caitlin is. To make her turn into Killer Frost at this point would undo all these displays of strength. Further more, we never got context for that Killer Frost vs Vibe fight. Could we have it backwards? Could Cisco have been manipulated by Savitar again or gone drunk with power. Will he be the one to take after his evil Earth-2 doppelganger?

Though personally, I think/hope the writers will leave the central Team Flash (Barry, Cisco and Caitlin) alone. They are the heart of this show and have been since before the beginning (ie: Arrow Season 2). Making one of them die/ betray would be like having Diggle or Felicity die or go evil. It’s unthinkable! So let’s get to the more creative – and easier on our nerves – theories.

This is an evolution of one of my previous theories, which asks is H.R. actually the villain Abra Kadabra. Maybe Savitar is back or maybe it’s just an illusion. For all we know, the whole Iris death scene could have been an illusion and H.R. was there casting it. Though the main focal point of this theory goes in a different direction and has history repeat itself with H.R. killing Joe West and then using an illusion to make it look like Barry did it. 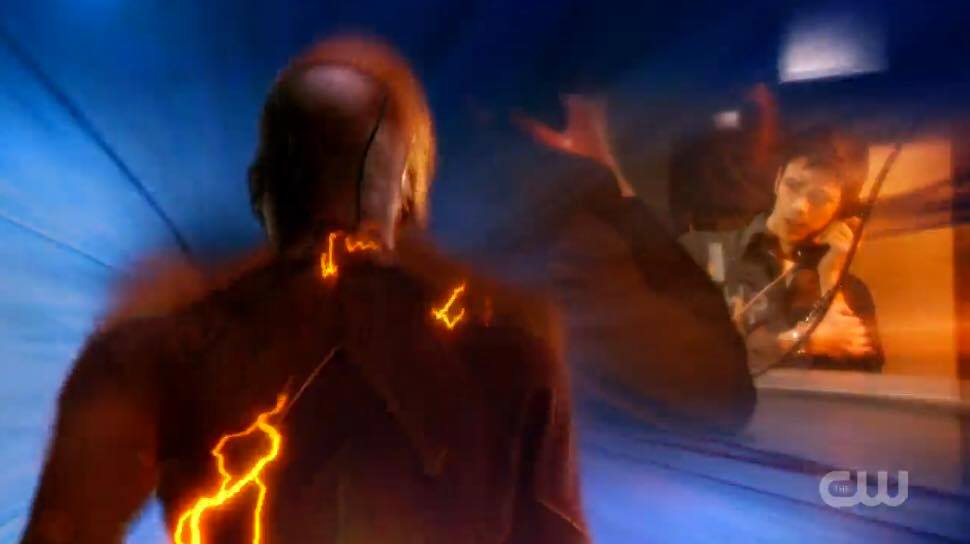 Now to be fair, this theory requires the most twists; but there is one major piece of evidence for this and it can be found in Season 1. Barry has seen the future before, specifically when he first traveled through time at the end of Season 1. There he famously saw Killer Frost but there was also another vision that has yet to come through – Barry in handcuffs. Having Barry get framed for the murder of his adoptive father and friend Joe West would be a horrific case of déjà vu and would provide the final missing piece to this Season 1 puzzle.

There’s still one final detail about Savitar’s prophecy that people seem to forget: He said there were three fates, but he never specifically said it was for three different people. Someone could ‘Betray’ and then either ‘Fall’ or ‘Suffer’ to make up for the initial betrayal. And if we are to consider 1) the original focus on Wally by Alchemy 2) the preview for next week, it’s pretty clear that Wally is the key to Savitar’s plan.

Wally could somehow bring Savitar back against his will. Then to set things right, he could be the one to re-trap Savitar in the speed force but this time stay there as well – so Savitar has no way to escape. Trapped in the Speed Force for all eternity could certainly be considered a fate worse than death. Then again, the same ends could be achieved by trapping Savitar and then someone having to kill Wally. Having to be the one to kill your friend can also be considered a fate worse than death (as we saw with Caitlin and Cisco).

NOTE: There’s one problem to killing Wally this early though – and it will be the subject of a future Theory Thursday, but I’ll touch upon it now briefly. This two part Gorilla City story arc introduced the idea of ‘what if Flash resorted to killing’. That’s actually a huge story in the comics and Wally needs to be alive for it – unless The Flash writers are planning on Season 4 to have a HUGE shift in tone. But again, more on this at a later date.

So which theories do you like best? Some of these aren’t mutually exclusive, so feel free to mix and match! And remember “Falls” doesn’t have to mean “Dies”. So sound off in the comments below with your thoughts and see you next time!

Home » Fandom » Theory Thursday: Who Betrays, Who Falls, Who Suffers On The Flash