As if Time Travel wasn’t confusing enough on The Flash, Legends Of Tomorrow seems to complicate things even further by both the quality and quantity of their time jumps. Now I’m not here to try to rectify both universes and explain why Time Wraiths never attacked them like they do Barry, Thawne and Zolomon. But what I would like to take a stab at is:

At which point in the Reverse Flash’s timeline does Season 2 of Legends Of Tomorrow happen?

This might seem like a really simple question at first, but the more you think about it, the more you remember how Eobard Thawne’s “perception of time” is very different from our own. This isn’t just because he’s a Speedster who can time travel, but rather because his timeline largely runs counter to Barry’s and we the viewers’. In short, the timeline that Barry and we the viewers experience proceeds A, B, C. Eobard’s on the other hand mostly follows events as C, B, A.

Remember that Thawne was originally from the distant future and wanted to be like the Flash. He traveled back in time, but then learned he was destined to be the Flash’s rival rather than friend. So after years of fighting the future Barry, he finally traveled back in time (to Season 2) and learned the Flash’s secret identity. Thawne then travels back to Barry’s childhood and kills Nora Allen. So where does the confusion/ problem come into play? Take a wild guess… FLASHPOINT!

Thawne’s timeline ends at the close of Season 1 where he is erased from existence. His past selves of course remain intact, otherwise the events leading up to his death would have never happened and it’d form a paradoxical time loop. (Diagram Below) 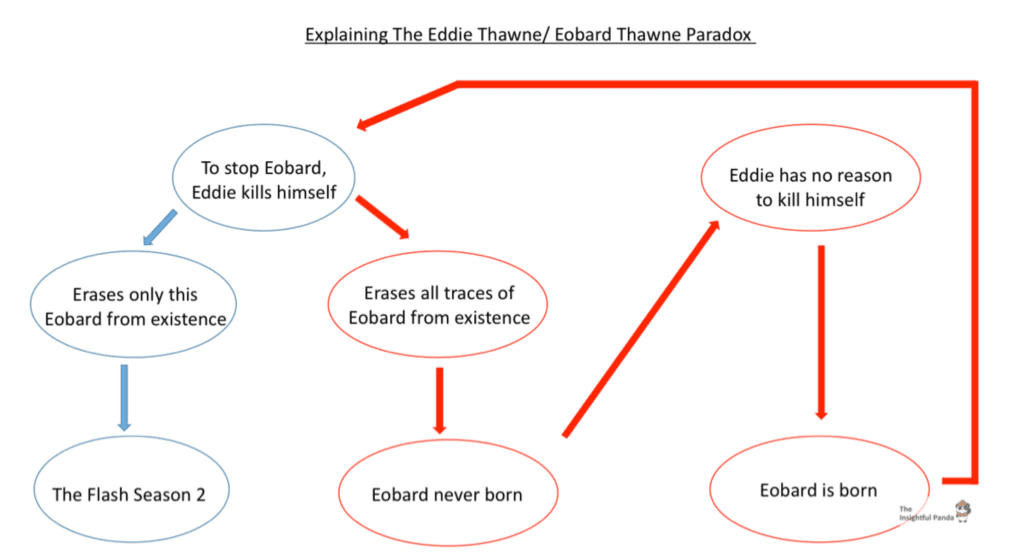 So with there being no chance of this being a Post Season 1 Thawne on Legends Of Tomorrow, is this an inexperienced Pre Season 1 Thawne that has been battling Future Barry?

This actually makes a ton of sense considering when Thawne tried to return to the future in “Fast Enough”, he made mention of Rip Hunter being an “interesting man”. Sure at the time it was an Easter Egg of things to come with Legends of Tomorrow; but this season could very well give us the foundation of that knowledge and show how Thawne and Hunter first met. Additional evidence for this can be found in how Thawne is treating the timeline. Thawne has mocked Barry several times for not knowing how to tip toe through the timeline; but this Thawne is causing abnormality after abnormality. Is this due to inexperience OR is it because he simply has nothing left to lose?

With the after effects of Flashpoint now in place, there is a second option. Is this post Flashpoint Thawne?

When we last saw Eobard Thawne on The Flash, he had once again killed Barry’s mom and sped off with Barry to the present day. HOW he was able to do might seem like a “wibbly wobbly timey wimey” headache; but it ultimately boils down to one of two possibilities. Either the Eobard we see in those final moments of “Flashpoint” is a Time Remnant or he has to eventually return to the night Barry’s mom was killed in order to keep the timeline together.

If he’s the real deal, then he must return to the night of Nora Allen’s murder and live out his Season 1 fate. If he doesn’t, then it would create a tremendous paradox as Season 1 and every motivating factor that led up to this moment would have never happened. On the other hand, if this Eobard is in fact a Time Remnant, then either he or his other self must be killed or else be hunted by the Time Wraiths. And since we just explained why the Eobard (Wells) must exist, Time Remnant Eobard would be in trouble. Whatever way you slice it, this Eobard would be a man with no future… and maybe that’s what ties him, Darhk and Merlyn together.

All that awaits Eobard is death and being erased from existence. Darhk has plenty of years ahead of him, but Sara crushed him by revealing that his big plans end with his wife dead and him almost killing his daughter. And if we’re dealing with the present day Malcolm, then we are dealing with a man who’s lost his wife, son, control of the League, hand AND now daughter. Each of these men have literally nothing left to lose, and that brings us to the big MidSeason reveal of their quest for an item known as The Spear of Destiny.

Sure a Speedster can change the timeline, but as we’ve seen there’s plenty of repercussions to watch out for. What if the Spear of Destiny allows the wielder to change history free of consequences? This could offer a powerful motivator for the new Legion of Doom as well as for the Legends as Sara could bring back Laurel and Stein could keep his daughter. This could even spell the return of Captain Cold!

So which Reverse Flash do you think we’re dealing with in Legends Of Tomorrow:

Sound off in the comments below!

Home » Fandom » Theory Thursday – Which Reverse Flash Is On Legends Of Tomorrow? (CONFIRMED)