It’s that time of year again where we attempt to figure out the perfect gifts for our friends and family. Sometimes this is an easy process, while sometimes we just need a push in the right direction. I’m here to help you do that this year with some must have Funko Pop! figures. These little guys are always fun for just about anyone in the family because there’s such a huge collection of them spread across the broad now. They cover various characters and moments in pop culture that we cannot get enough of but keeps us wondering where we are going to have room to store all these wonderful Pop! figures we keep purchasing and attaining from our friends and family members at Christmas time. Where there’s a will there’s an empty shelf begging for the latest release from Funko to grace it. 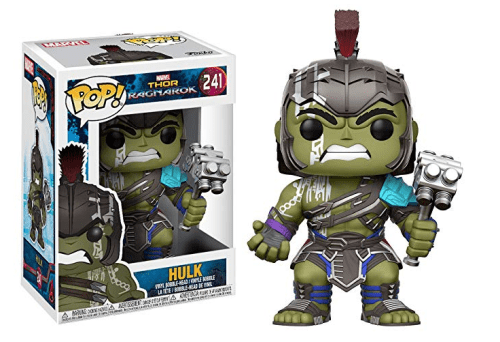 The Hulk is one of my all time favorite super heroes. I love the Dr. Jekyll and Mr. Hyde personas that have lurked deep within him and his appearance in Thor Ragnarok did not disappoint. Then again the Hulk has not disappointed in any of the Marvel films within the MCU since its creation. While I’m glad that The Hulk is back fighting bad guys instead of Thor, this does not lessen that this is one of the best Hulk Pop! figures on the market. Might as well take a chance and attempt to avoid a Hulk Smash this holiday season by giving a bad gift with this big guy.  You can find Thor Ragnarok – Hulk Helmeted Gladiator here. 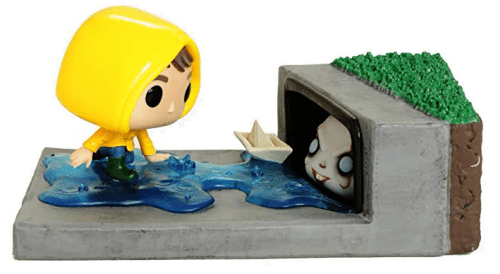 While this particular Pop figure is a Hot Topic exclusive, no one can resist Georgie and his boat. This is especially true of Pennywise in this iconic scene from the hit book and film It. The scene ultimately became ingrained in our minds as one of the most brutal openings of a horror film ever, the truth is as a horror fan this is clearly one of my favorite openings ever. Not many other horror openings lend themselves so easily to becoming a Pop! movie moments figure set, but this one ranks high and I hope many others to come to add to my collection. You can purchase Pennywise in the Gutter here. 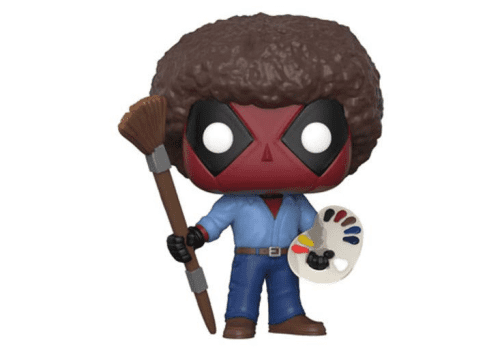 The first time I saw the Bob Ross inspired trailer for Deadpool 2, I fell in love with the character even more. Now a series of Deadpool Playtime Pops! exist that begs us to purchase them all but I’m inherently drawn to the Bob Ross one. Maybe this is because I grew up torturing my mother with these re-runs of a man who just wanted to paint happy little trees. Maybe this is because I truly do love Bob Ross and Deadpool. Regardless, it never hurts to own more than one Deadpool so why not make a Deadpool fan happy this year and give them the joy of him painting. You can buy Deadpool Playtime- Bob Ross here. 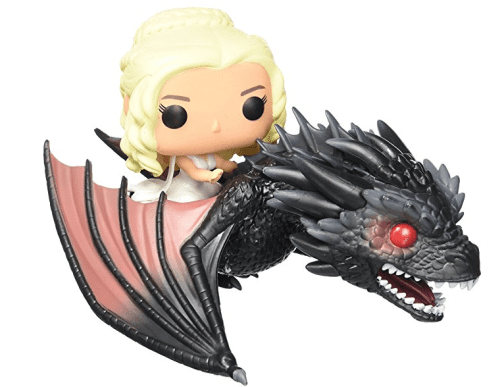 Out of all the figures on my list this one is clearly the coolest. Any Games of Thrones fans needs this Pop! figure in their lives. I’m positive anyone looking at this particular figure can envision seeing this displayed proudly in their loved one’s home. For some reason out of all the ones on the list this one is the figure I see as a prize in a collector’s home. Besides one cannot argue that making the dragon roam and destroy other figures within their collection is not appealing.  You can find Dragon & Daenerys Targaryen here. 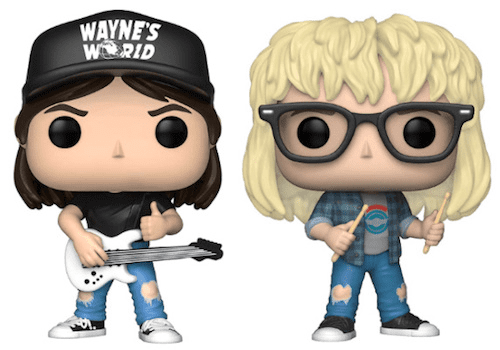 Wayne’s World. Party time. Excellent. This is one of the best skits in SNL history and who does not want to sneak up beside someone on a couch and randomly make Wayne or Garth say one of their famous key phrases? These two figures are the perfect gift for someone who embraces their silly side. They lend themselves to endless hours of entertainment and a stop motion video of Bohemian Rhapsody by someone beyond talented. You can purchase Wayne & Garth here. 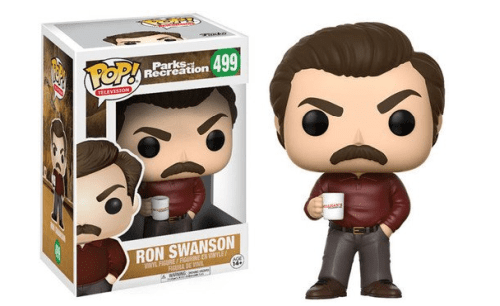 I live my life every day as a Leslie Knope wishing deep down I could be a Ron Swanson. I cannot think of many people who wish they did not have a desk chair where they could swivel around and avoid a co-worker who has gotten on their last nerve. Plus that way none of us are bombarded at the door by our office manager expecting us to work ten minutes before our shift actually starts.  Ron taught fans a lot over the seven seasons of Parks and Reaction and now his wisdom can radiate from your desk while working. You can buy Ron Swanson here. 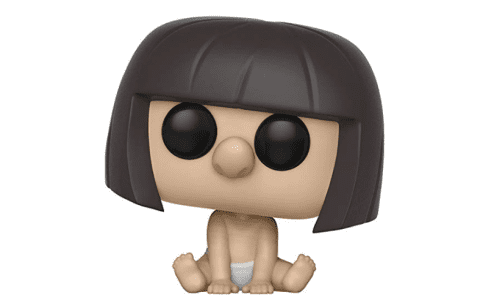 How cute is this?!  I could not have been more excited to watch The Incredibles 2 earlier this year. It’s a sequel that seemed so obvious but never came to fruition.  The moment Jack-Jack began to morph into various creatures and other people, I could not think that he was too precious for words. If anyone had any doubts this Funko Pop proves it with our favorite super baby morphing into our favorite fashion designer of superheroes.  This particular figure will cost a bit more as it is a convention exclusive, but who can deny wanting to have a part of this as their collection? You can find Edna Jack-Jack here. 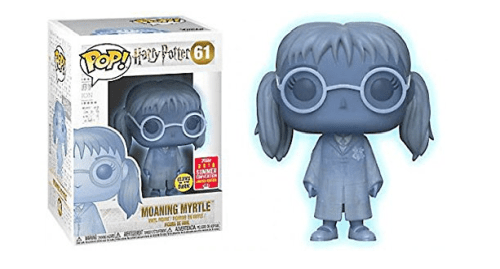 Also a Summer Convention exclusive is one of our favorite ghosts.  Moaning Myrtle.  I know that Nearly Headless Nick is a great way to go as well, but this is also a collector Pop! from the Summer convention circuit and one of my favorites. She is beyond adorable and one that I think all Potterheads would love to display her in their homes somewhere.  While she comes with a hefty price tag, Myrtle glows in the dark.  Plus, don’t you think it’s time that Myrtle finally makes her way out of the bathroom?  Me too. You can order her here. 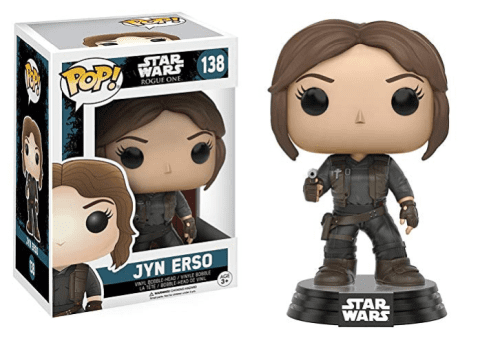 While many amazing female Star Wars characters exist within the universe, one of my favorites of recent years is Jyn Erso. Despite knowing how Rogue One was going to end I still could not help myself from bonding with Jyn and the rest of the crew. She is one of the many Star Wars characters we have given our hearts to over the years and I would venture to say one of the favorites within the franchise as well. Though I wish we could have raveled in her character longer, at least as a fan we can take her home or receive her as a Pop figure this holiday season. You can buy Jyn Erso here. 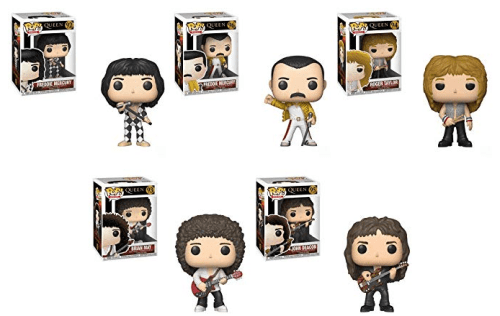 While these figures are set to release on Christmas, with the resurgence of Queen in the world every die hard fan as well as new fans alike will want to rock out with mini version of the legendary band.  Even if you have to say your gift will be here after Christmas a devoted Freddie Mercury fan will not care once one of his figures enter their hands.   There’s also a FYE exclusive Freddie on top of the other five figures available for purchase.  So while you can have a shelf full of Freddie it is not the same without the rest of the band. You can preorder Freddie, Brian, Roger, or John here.

If these do not provide you with enough options don’t forget about the line of Christmas Pops available as well for purchase and Fornite Pops as well. The truth is these little figures are ones that one truly cannot go wrong with ultimately. Everyone is a fan of something or someone. The only problem I ran into are all the amazing upcoming releases coming out at the end of this year or early next year. Many figures did not make the list this year simply because they are not available yet.  Until next year I will have to dream about giving a Cory and a Topanga Pop to a bride and groom as a gift as well as gifting them to myself.

Home » Movies » The Yuletide Guide: Must Have Funko Pop!s