‘Tis the season for giving; and if you’re giving Video Games, you’ve come to the right place! There’s been a ton of games this year, but which are the best to get this holiday season. Which are fun for the whole family? Which have been around all year but FINALLY just got good? Here’s a handy dandy guide to help you with all those questions and more! And whereas no two gamers are alike, there’s bound to be something on this list they’ll enjoy! (Sorted according to ESRB Game Rating)

We might have traveled to Kanto many times in our Pokemon careers, but never like this. Pokemon: Let’s Go marks the first time Pokemon has ever had a major title on a console. Sure we’ve had Pokken Tournament and Pokemon Coliseum/ Stadium in the past, but Pokemon: Let’s Go is the closest we’ve come to a core game. The mechanics might be a bit different from the base games, but will feel incredibly familiar for any fans of Pokemon Go. So if you’re new to the main series, this is a great place to start. Additionally, its allowance for tag team and co-op play make it the perfect way to get your kids hooked on one of your favorite childhood games. As for veteran players, this game also has a host of Master Trainer challenges and 150+ ride/ follow Pokemon. So if you ever get tired of traveling through Kanto, you can just let your Machamp carry you.

Pokemon: Let’s Go has a Pikachu and Eevee version, both of which cost $59.99. There is a Pokeball Plus Bundle for $99.99, which comes with the game along with a Pokeball controller to aid in catching. Pokemon: Let’s Go is rated E for Everyone. You can purchase both versions of these games on Amazon!

Personally I can go on and on about this remaster – and I have. As if bringing back one of the best game series of the PS1 days wasn’t enough, the Spyro: Reignited Trilogy gives everything an incredible amount of new detail. Whether you grew up with the original games or are discovering this series for the first time, this game is a refreshing break from the grind of daily life – and other games – and just lets you enjoy yourself! From colorful and hilarious enemies to challenges that range from the simple to surprisingly complex, this is a game that players of all ages will enjoy.

Nintendo wasn’t kidding when they said this would be the biggest Smash Bros yet. With over 70 fighters, 100+ levels, 8 person multiplayer and a massive story mode, this truly is the ULTIMATE Smash Bros. Besides having every fighter from past games return – along with many new ones – Super Smash Bros Ultimate also gives you an option to have your battle arena transition throughout the fight. This not only keeps players on their toes, but also helps you try out the multitude of stages available.

There are two kinds of people in this world: Those who are addicted to Spider-Man and those who are not yet addicted to Spider-Man. Insomniac Games really hit the mark with this one and seamlessly created one of the best superhero video games of all times. Sure the story is original and compelling, but let’s talk about why you’ll really play it: the web slinging. Spider-Man is one of the hardest characters to translate into video games because of how he moves, and yet Insomniac knocked it out of the park! The controls are seamless and most of your playtime will be spent exploring New York City and taking screenshots.

This year has been a roller coaster for Destiny 2, but it surprisingly earns a spot on our Holiday list after the success of its “Forsaken” expansion as well as the roadmap of content planned for the coming year. Whereas the original campaign of Destiny 2 was short and the DLC’s ranged in quality, “Forsaken” completely changed the game – literally – with new Supers, compelling storytelling and a ton of quests / activities. Bungie recently expanded on this when they revealed their roadmap for the next year which will see a continuous stream of content for all players whether or not they have the Forsaken Annual Pass.

Destiny 2’s Legendary Collection ranges from $29.99 to $59.99 (depending on where/ how you buy it) and it includes the base game, both DLCs and the enormous “Forsaken” expansion. If you’re new to the series, it’s a great starting point. And if you choose to throw in the Annual Pass that costs an additional $34.99 but will give even more content for the coming year including quests and raids. Destiny 2 is rated T for Teen.

If you never understood the idea that video games could become an art form unto themselves, then you might need to pick up Red Dead Redemption 2. This game has not only been flying off the shelves, but also brought home the most awards from The Game Awards 2018 this past weekend – and rightly so! As if the story wasn’t compelling enough, Red Dead Redemption 2 gives players an absolutely enormous world to explore that destroys the stereotypical ‘old west’ landscape. From swamps and dimly lit caverns to sprawling plantations and more modernized cities, there’s much more than just tumbleweeds for scenery. If you’re looking for a fast paced action game, this might not be it; but if you want a game that totally immerses you in its world – and makes you want to explore every nook and cranny – then you’ve come to the right place.

Red Dead Redemption 2 costs $59.88 on Amazon and is rated M for Mature – it is the old west after all.

The master – or should I say God – of hack and slash games is back! God of War has finally returned to the PlayStation world and made its first appearance on the PS4, but this time around, Kratos has a son. Even more surprising than that, God of War (2018) has …. an emotional story. Sure the game series has had larger than life battles over the years and momentous upheavals, but God of War (2018) brings just as many emotional battles as it does physical. And that is precisely why it rightfully earned the top spot as ‘Game of the Year’ at the Game Awards 2018.

God of War costs $29.99 on Amazon right now and is rated M for Mature – for obvious reasons. 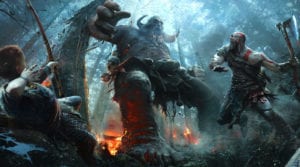 This post is not sponsored, but we may receive a small portion of sales if you purchase any of these items! Thank you for being a valued reader of Fan Fest News!