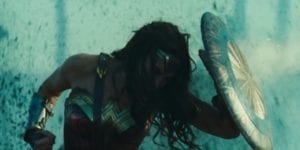 From slashfilm.com: French magazine Studio Ciné Live paid a visit to the Italian set of Wonder Woman last year, and just recently published a full report of what they saw. Among other things, they reveal that the big bad of Wonder Woman will be Ares. While the article does not appear to be online yet, Les Toiles Héroïques (via ComicBook.com) transcribed some key passages. All the excerpts below have been translated from French to English via Google; please forgive any clumsy wording and keep in mind that some details may have been lost or mutated in translation.

Steve Trevor: I play a pilot who works for the Allies and spies on the Germans without their knowledge. My character steals a notebook filled with scientific formulas in an Ottoman base. He steals a plane but is shot down in the open sea.

Apparently, these scientific formulas are for a deadly gas that could wipe out humanity. They are of particular interest to Ares, the god of war, who harbors a grudge against humankind. Here’s more from Studio Ciné Live:

Why did Zeus create the Amazons? Ares is one of the biggest hits in the world. To restore harmony between them, Zeus created the Amazons that Ares reduced to slavery. The Amazons revolt with the help of Zeus, who will die of the hand of his son having had time to find Themyscira, their haven of peace. (…) Diana Prince becomes Wonder Woman by helping Steve Trevor and a squad of proud arm-in-law in search of one who wants to wipe humanity off the map with deadly gas. 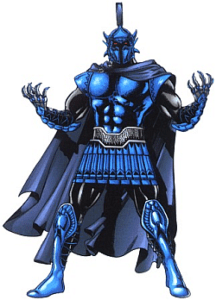 It’s long been rumored that Ares would be the big bad of Wonder Woman, but until now we haven’t had any real confirmation. Still unclear is who is playing Ares. The trailers made it look like Danny Huston could be the main villain, but he seems to be playing a human. Or maybe he’s Ares disguised as a human? 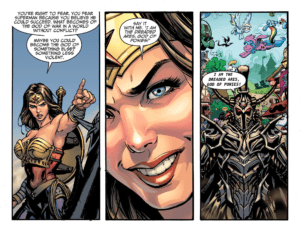