The true identity of one of the Disney Plus series’ central figures, Agatha Harkness, is another enigma. How did Agatha Harkness know about the possibly fourth-wall breaking Evan Peters who appeared previously as Quicksilver in another film franchise?

When the first images of Evan Peters in WandaVision were revealed, many fans thought that the multiverse had finally opened up and we would see wacky comebacks from several film continuity. In the end, though, it was revealed to be a character named Ralph Bohner. That’s some good expectancy-subverting there. But, why did Agatha pick Ralph Bohner, a guy who resembles another universe’s Quicksilver? It’s simple: she used the Darkhold, noted that Bohner resembled her lost brother from another reality, and discovered him on Earth-616.

Is it complicated enough yet? /u/Nyangun_Monte believes the fan theory is quite straightforward in its explanation. Considering that Dr Strange in the Multiverse of Madness has reintroduced Patrick Stewart as Professor X from those same films, it may very well stack up. 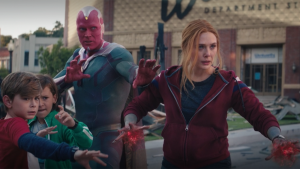 In the MCU, Wanda Maximoff was a victim, and her trauma formed into her turn to evil in Multiverse of Madness, where she’s simply looking for a universe with her children. She does kill a few people along the way, but hey, what is love if not murdering people so you can see your kids?

It’s possible that Scarlet Witch will be able to truly atone for her role in the Illuminati’s deaths on Earth-838, but she at least made up for it by submitting to Doctor Strange? She’ll need a lot of therapy after her multiverse adventures.

The episodes of WandaVision and Doctor Strange in the Multiverse of Madness are now available to watch on Disney Plus.