Jeffrey Dean Morgan, who plays Negan on The Walking Dead, shared an image alongside the show’s hero Rick Grimes. However, there’s a twist.

Andrew Lincoln played the lead in The Walking Dead, Rick Grimes, until he left in season 9. Both actors have received multiple awards for their great performances throughout the long-running series. 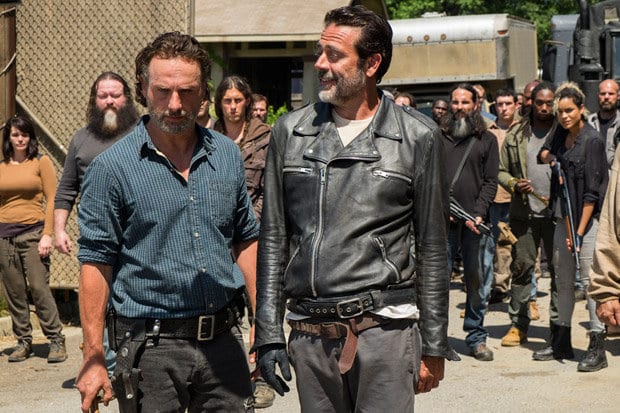 With The Walking Dead heading into its final season, many people are wondering about what will happen to their favorite characters. This includes Negan and Rick.

Rick’s character didn’t die on the show. He left to spend more time with his family. But something happened to him during the show. What happened? We don’t know just yet.

Some people believed that Rick died, but his friends never found his body. Audiences were left with more questions than answers because Lincoln’s return was possible even though he didn’t die on screen.

Morgan recently posted fan art of Negan and Rick together again on Instagram. In the image, Negan stands with his beloved bat Lucille slung over his shoulder. Rick is sitting in a chair below him and he has one hand missing, which is a reference to Rick’s arc in the The Walking Dead comics.

Morgan’s post came with a sentimental caption for the “killer” art, saying that he misses Lincoln, and that he is struggling to come to terms with The Walking Dead nearly being over. See the full post below:

Even though The Walking Dead is coming to an end, that doesn’t mean that long-term fans will be left without anything to watch. On March 7, it was announced that Morgan would be returning to play Negan in a new Walking Dead spinoff miniseries called Isle of the Dead.

Rick Grimes will be appearing in movies based on his character from The Walking Dead. Morgan, who shared this fan art, has made people wonder if there could be a reunion between Rick and Negan in the near future.

We do know that Andrew Lincoln was in Atlanta during filming of the final episode of The Walking Dead.

Fans can relax knowing that there are still more stories to be told. The show is ending, but there are television show spinoffs and movies coming out.

Morgan doesn’t often post fan art on his social media accounts, but he decided to post a photo of Negan and Rick together. This will continue to stir up speculation about a future Walking Dead project. However, The Walking Dead will come to an end with season 11, and the story of its core characters is far from over.