We have waited weeks for the mid-season 8 premiere to arrive and now that it has come and gone, one thing is for certain, our beloved Carl has died.

We saw in the mid-season finale that Carl had been bitten by a walker and in this episode, we got to witness his final moments with his family.  But due to a creative choice, we didn’t see Carl pass on on-screen. 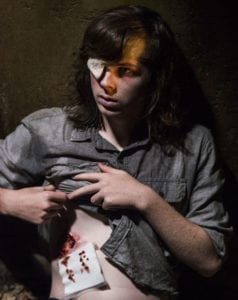 “There’s no reason that you need to see that moment,” said Greg Nicotero, the show’s executive producer and the director for this episode. “It’s all implied, like the moment where Carl is forced to shoot Lori in season three. There is a respectful way to show this, and I really never imagined that we would have ever wanted to film that. His last words were, ‘It’s like it’s got to be done by somebody that you love.’ He’s really sparing Rick and Michonne this last heartbreaking moment by being willing to do it himself.”

“I don’t think Rick or Michonne could ever truly recover from that. He’s already left them with a lot to think about in regards to what his dying wishes are. You know, he really is laying out the possibility what the future can be,” Nicotero adds.

Carl, in his final moments, tells Rick and Michonne about the Governor and Woodbury and about how he sees the future. The flash-forwards were Carl’s and he pictures a thriving Alexandria, one with old man Rick and Judith growing up. 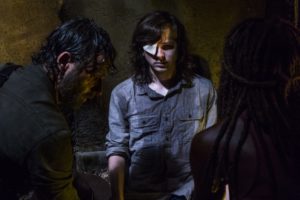 “So he needs to leave Rick and Michonne with a sense of hope and a sense that there can be more for them to live for. So I don’t think it would have made much sense at all to actually physically see Carl die on screen or to have one of them do it,” says Nicotero.”I think it fit perfectly in everything that Chandler was portraying in that moment.”

Carl himself, Chandler Riggs, had similar comments about the choice to not show his death.

“I personally wouldn’t want to watch a kid shoot himself and I think it’s kind of a just, a censorship kind of thing just for the viewers to keep them from going through that,” Riggs said. “I’m definitely okay with the way that it was shot and it was edited and everything. I’m definitely happy with how it went down.” 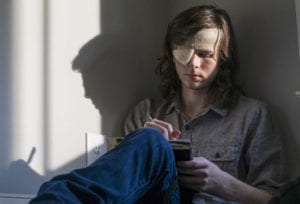 This was a tough episode to swallow, but if Carl can see a bright future in this world, so can we.

Chandler, you will be missed, it’s sad to see you go, but good luck in your future endeavors.

To Carl Grimes (and Chandler Riggs) With Love

‘The Walking Dead’: Chandler Riggs Shares his Reaction When Cast as Carl