A baby bump for Rosita? Well I guess we all will have to wait and see. The Walking Dead’s Christian Serratos is expecting her first child with long time boyfriend David Boyd, lead singer of New Politics. The news was confirmed by the actress’ rep to E! News on Wednesday.

“they’re extremely happy and have been looking forward to starting a family,”~a source telling People about the excited couple.

Many fans are probably already wondering how it will affect her role on the show. In previous season, Sonequa Martin Green (Sasha) and Alanna Masterson (Tara),  were pregnant during filming without any problems. Their pregnancies were not scripted into the show but what about Rosita? Her character was involved in a long-term relationship with Abraham who met his demise at the hands of Negan (Jeffery Dead Morgan) and Lucille. He cut ties with Rosita to pursue Sasha, which led her to hook up with Spencer. So if the the producers of the show decide to write the pregnancy in, the question would be…”Who’s your baby daddy?” And to top it off, They are both DEAD! Yeah, not seeing any appearances on the Maury show any time in the future.  Maybe that’s why she’s so angry. Pregnancy hormones. 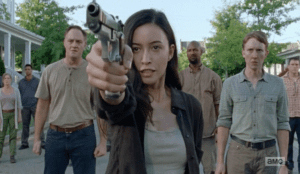 Another theory would be to kill Rosita off. If you have read the comics, you know that she becomes pregnant but Eugene is not the father. Eugene decides that he will care for her and the baby and to not tell the real baby daddy. We never find out who it is. She is later killed by Alpha, the leader of the Whisperers. Hmmmm…my guess would be this theory but then we would have to do the whole time jump thing and all that good stuff.

“Death on this show is inevitable. Robert Kirkman gave Rosita an epic death in the comic book, he did that for every character. No wasted moments. So whatever twist or turn happens for her I’ll take it with bells on.”~Christian Serratos, interview in latest issue of Bello magazine.

Anyway, one could only speculate at this point. You, me and the whole The Walking Dead Universe will just have to wait and see how it will all play out…All I can say is that I can’t wait!

Watch Christian Serratos on AMC’s The Walking Dead every Sunday at 9pm.