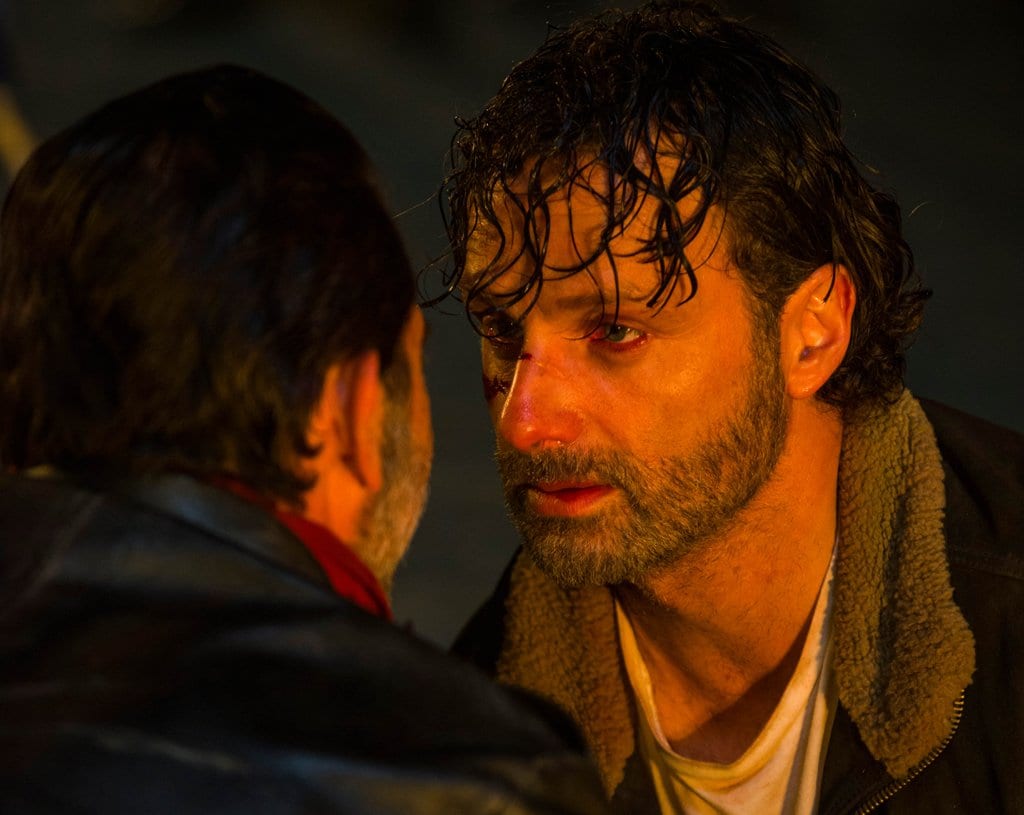 Heavy doesn’t even begin to describe last night’s season premiere of The Walking Dead. Try gut-punching. Try terrifying. Try utter devastation. After six long months of going insane wondering Who Met Lucille, the answer was finally revealed, but the result was even more agonizing than the wait.

As I, like every fan watching last night, waited impatiently and anxiously for the big reveal, when the moment came I felt a huge relief and was even gleeful that Abraham was “it” because I thought that meant he would be taking Glenn’s death just as Denise took his from the comic storyline. But this is The Walking Dead we’re talking about. There are no happy endings, especially now that Negan has arrived.

When Daryl sprang into action to possibly save Rosita from Lucille, any definition of the word calm immediately left my mind as I once again clenched my intestines. I knew there would be consequences but nothing as terrible and gruesome as what followed. He literally beat the holy hell out of Glenn with every detail exactly how it played out in the comics. Of course I know it was just makeup (spectacular makeup) but seeing Glenn’s eyeball pop out of his skull devastated me. To see Daryl and Carl break down broke me as well. And when Glenn struggled to speak and spoke his last words, “Maggie, I’ll find you,” I was completely dead inside and almost bawled like a baby. BTW, major props to Steven Yeun for the delivery of that line.

While we all agree that Glenn’s death was the definition of f-d up, you may be wondering “Out of all the characters on the show, why is his death the most devastating?” Other than the manner in which he died, it’s because as Chris Hardwick so beautifully said on last night’s Talking Dead: “Steven was the heart and the hope of this show.” When we first met Glenn Rhee six years ago, he was a baby-faced pizza delivery boy with a huge heart to go with his enormous smile that was a ray of sunshine. From the moment he called Rick a “dumbass”, I couldn’t wait to see his face for the first time and when I did, I became instantly attached to him. He always saw the best in the people and loved the group with all his might, especially Maggie – for whom my heart aches for equally. As he evolved into a man before our eyes, his innocence always remained intact and his morals never swayed. He was enraged when a group member suggested burning the dead back at the Atlanta camp, shattered at seeing Noah being torn apart in front of him, and felt absolutely sick to his stomach and racked with guilt when he killed one of the Saviors. I mean, he had the opportunity to kill Nicholas after he tried to kill him but he didn’t. That’s who Glenn was.

What tears me up the most inside about Glenn’s death is the dinner scene. You know, what could’ve been. The group sitting around the dinner table, smiling without a care in a world. At first we first lay eyes on Rosita, Morgan, Sasha and Abraham – who are officially a couple in this sequence with their own bun in the oven – and then we see the camera focus on Glenn. In his lap is he and Maggie’s unborn child who looks to be about three or four with Glenn looking like the proudest, happiest dad in the apocalypse. Oh, what an amazing dad he would’ve been.

Goodbye Glenn and Thank You, Steven. The show won’t be the same without you.

Home » Fandom » The Walking Dead: Why [SPOILER’S] Death Is The Most Devastating Of All