The Walking Dead has had some monumental walkers over the years. EW interviewed Executive Producer, fantastic director and Walker magician Greg Nicotero to do the impossible – rank his top 10 walker creations. Nicotero, who has played a Walker on the show multiple times, provided some awesome behind the scenes insight into the stories behind his favorite walkers and why they made it to the top of his list.

Check them out below! 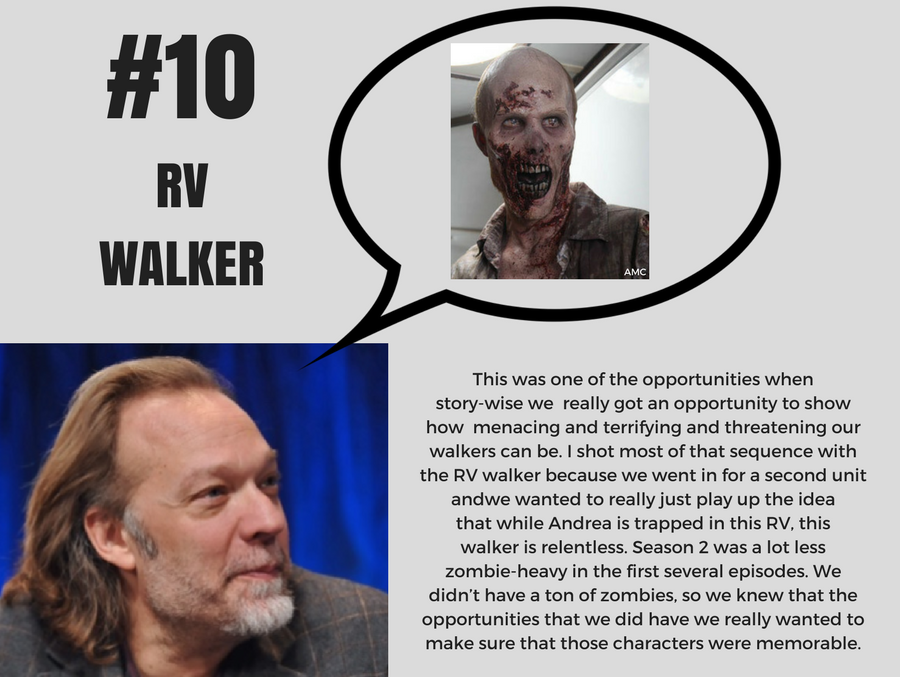 He continued with: “I really love the sequence. It’s scary, it’s suspenseful, and filled with tension. Everything that we want for The Walking Dead was embodied in that sequence. I think it’s one of the best scenes that we’ve ever shot in the show because it really is terrifying, and having Dale helplessly watching and Andrea trying to keep the walker from getting into the bathroom — there’s so much great stuff. It’s a classic horror scene with a classic movie monster and a classic beauty trying to save herself. It just worked on every single level.” 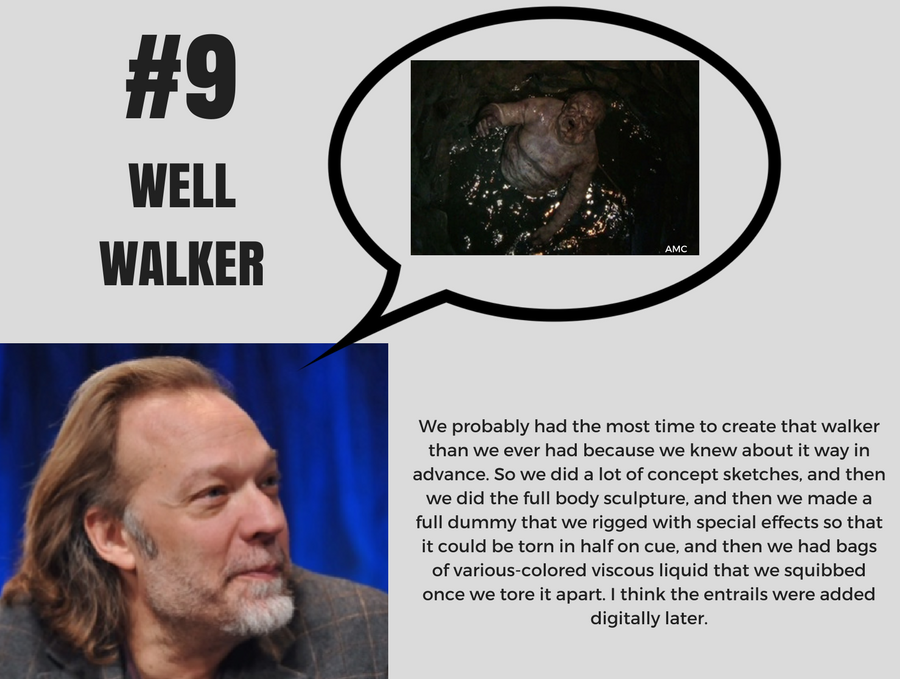 He continued with: “But the rest of it was all practical. That was probably one of the hottest days on set that I can remember, and the performer who wore that suit, his name’s Brian Hillard, we had to use one of those racecar cool suits because it was about 110 in the middle of July in a field with no shade. We had a dummy head that we filled with a bunch of gore so when they smashed it with the pipe it just exploded and I remember IronE Singleton almost vomiting. He was just so revolted by it.” 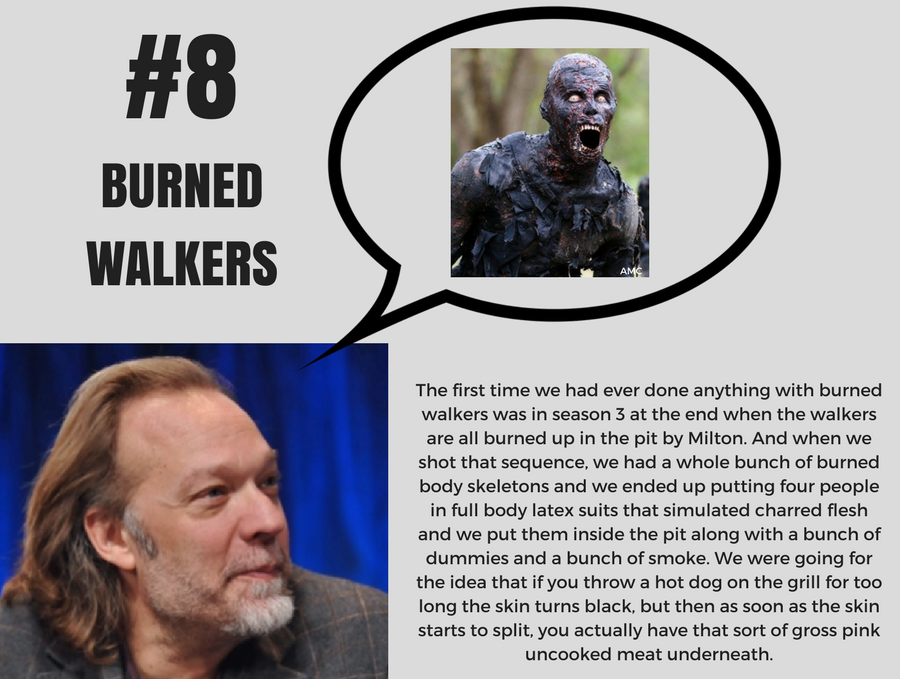 He continued with: “So all of the burned walkers in the show all follow that sort of visual style, which is the skin is black on the outside, but when it’s popped open, there’s this sort of uncooked dead flesh underneath. So when we shot that scene in season 3, I just remember feeling that it was a really powerful image to see all those bodies sort of melted together but that we didn’t really have a great opportunity to showcase them because they were pretty obscured. So when ‘The Grove’ came up, I thought it was a great opportunity to showcase these walkers because they would be obviously mobile and they wouldn’t be in one just big pile of melted flesh.” 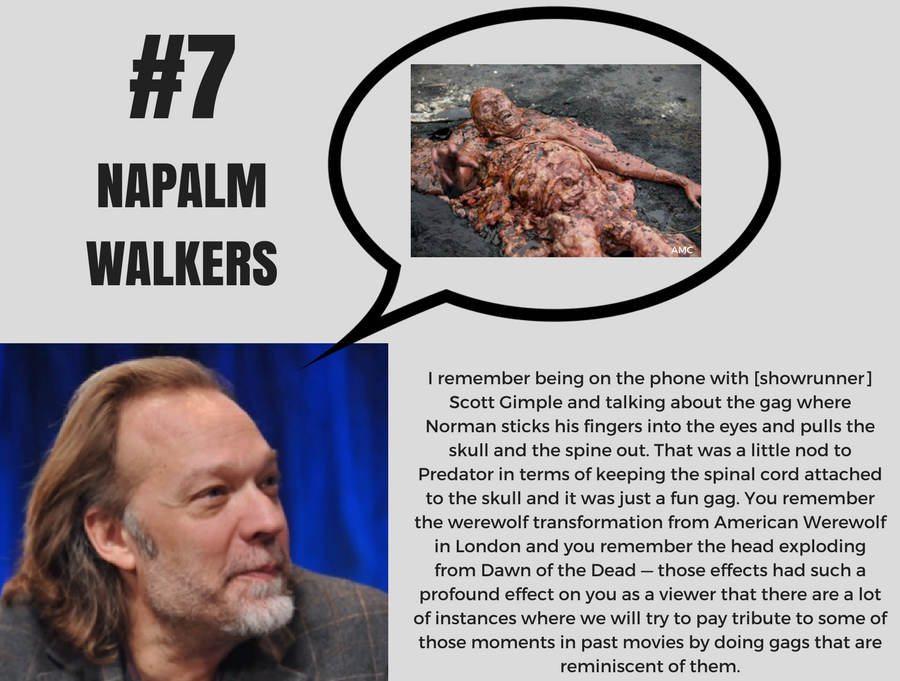 He continued with: “The Napalm walkers, we ended up sculpting little puddles of melted flesh and it was challenging because we had to hide a lot of the performer’s body underneath parts of this location so that we could augment with skeletal limbs and torn and melted flesh all around them. I think there were like nine of them. So it was an instance where we were raising the bar by giving us a visual walker that we had never seen before, but then also amping it up by having multiples of them.” 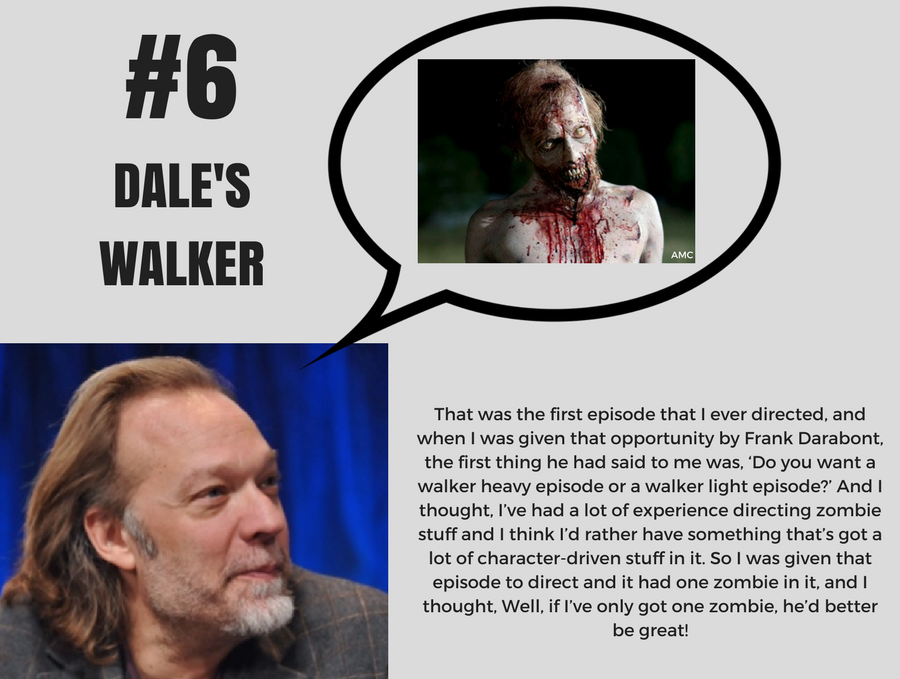 He continued with: “I just loved the fact that that particular zombie had a lot of screen time. One of the things that is a challenge on the show is the amount of time we have to do the zombies. If we have a minimum number of zombies we can do more elaborate make-ups. In the case of this particular zombie, since he was the only one in the episode, we were able to do a full chest prosthetic, a full back prosthetic. I think he had fingertips and things like that, stuff that we definitely couldn’t do if we had 40 or 50 or 60 zombies in each scene.

Kevin Galbraith played that particular walker and really showed how it’s not just about the makeup, but it’s also about the performer. It’s about how this person brings the makeup to life and that goes all the way back to Lon Cheney and Boris Karloff and all these great actors that wore makeup. We go through a lot of performers and we ultimately end up finding ones that we really, really like and we use them over and over again because they’re so good. I just thought the performance was fantastic. We had a zombie that not only was terrifying to Carl but then did some significant damage to Dale and we really got a chance to study him.” 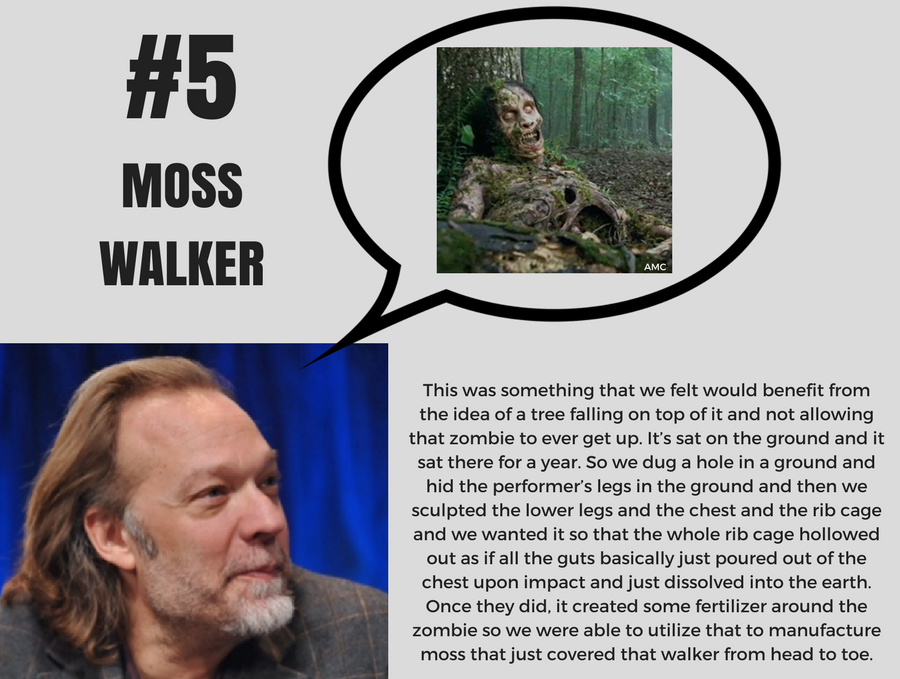 He continued with: “He wasn’t on screen very long. I think he’s only on screen for three shots in the whole episode. One thing about the show, these characters aren’t on screen for long times so they have to be visually striking. The imagery has to be arresting enough that it will leave some sort of imprint in the viewer’s mind.” 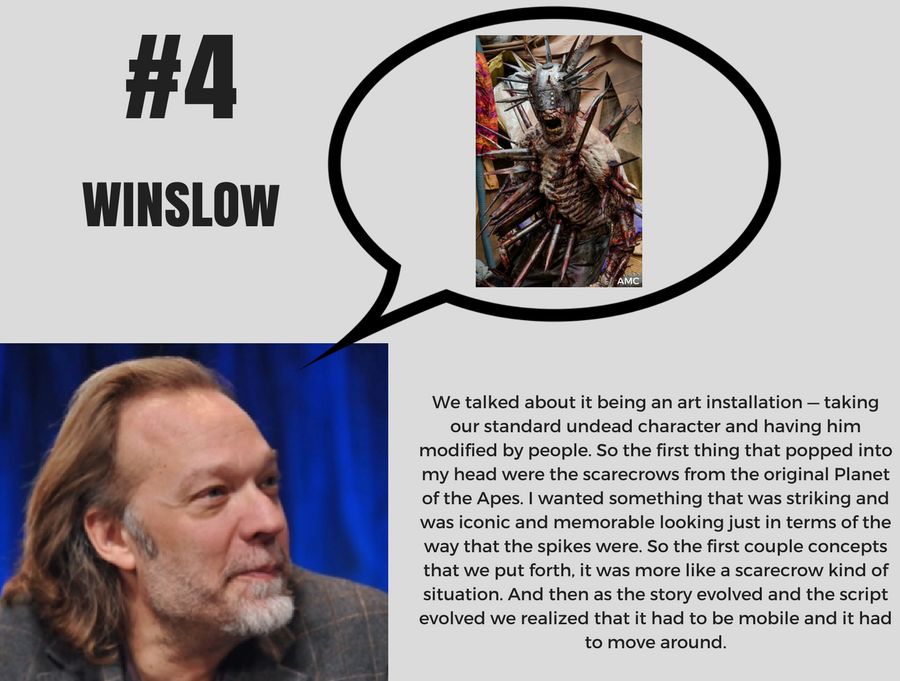 He continued with: “So then it was okay, well these people would have taken whatever was available to them and used it in a very artistic way. So the helmet is a motorcycle gas tank and a lot of the spikes that were coming out of it were rebar and circular saw blades, scissors and nails and all kinds of different things, but they all had to be applied in a way that had purpose to it.

Gino Crognale, who’s one of my permanent makeup effects artists on my team, played that zombie. That was probably one of the most grueling applications that we ever had done, because it was an entire day of shooting in August in the summer heat and he was completely covered. We had to put a race car cool suit underneath to keep him from overheating because we were genuinely concerned that all the foam latex would hold in so much body heat that he would get overheated.” 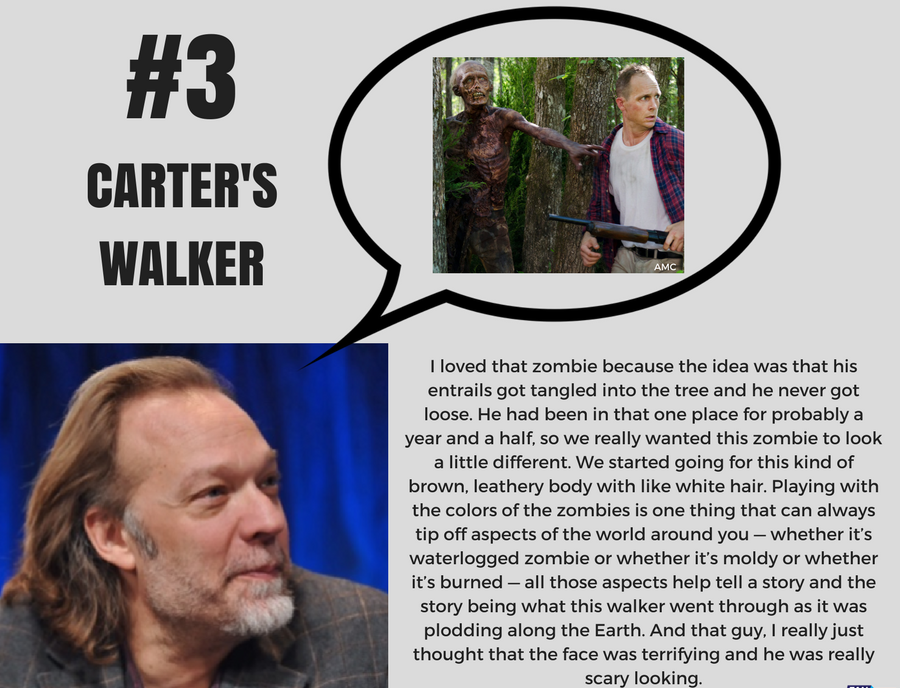 He continued with: “That’s the other aspect of the show that’s important is that these zombies can look unique but they also have to be threatening. The one thing that I feel like I’m constantly pushing on the show is to make sure that the zombies don’t just look like they’re wandering aimlessly, but that they are ticking time bombs and if you get too close to them, they will do some damage.

Because a lot of times the walkers are easily dispatched, every once in a while we need to remind the audience how dangerous these creatures are and in that episode, the walker that bites Carter, I thought they really did a great job of kind of conveying that. Of course the funny thing was when we did do it, we had a blood tube in Ethan Embry’s cheek and at one point when the walker bit into his cheek, there was a little bit of a fire extinguisher effect with the guys that were pumping the blood and it just coated the guy’s face for about 20 seconds. Straight fire hose. It was very Evil Dead 2.” 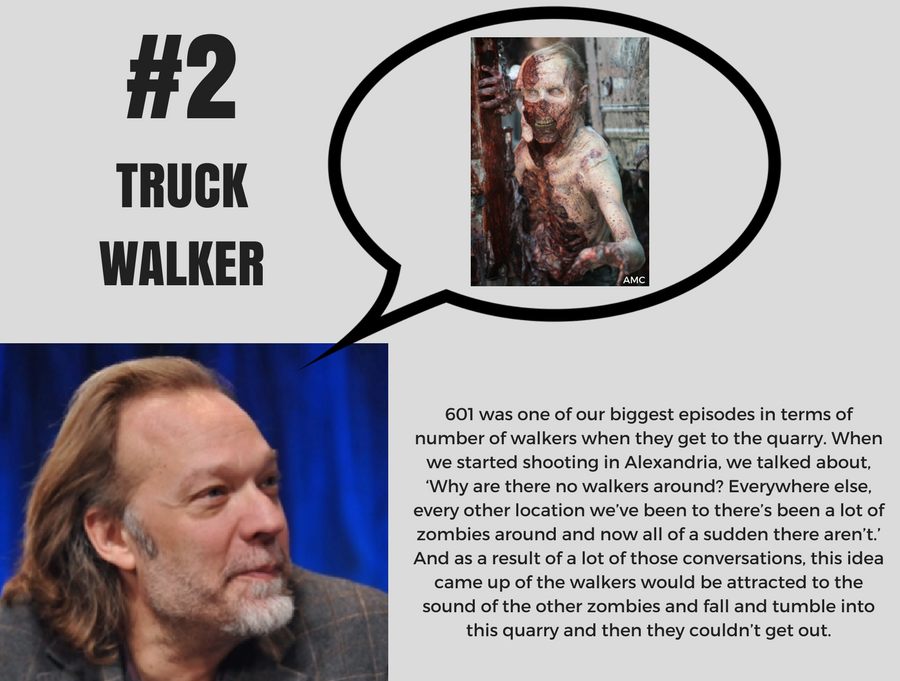 He continued with: “So the 601 premiere opened with this zombie squeezing itself between these barricaded trucks and it’s one of the first images that we see in this season so it was really important that we had an opportunity to see his face tear open, and his chest tear open in a way that we had never seen before — which was that just the pressure behind it and the fact that the zombie is squeezing through these two trucks. We had multiple layered prosthetics. We had the muscle layer and the bone layer, and then on top of it was a silicone chest piece and a silicone face piece and also some entrails that we had on trip wires. So as the zombie walked forward the trip wire would pull the entrails out and dislocate the rib cage. So there’s a lot going on in that particular shot. It was just taking what we do to the next level.” 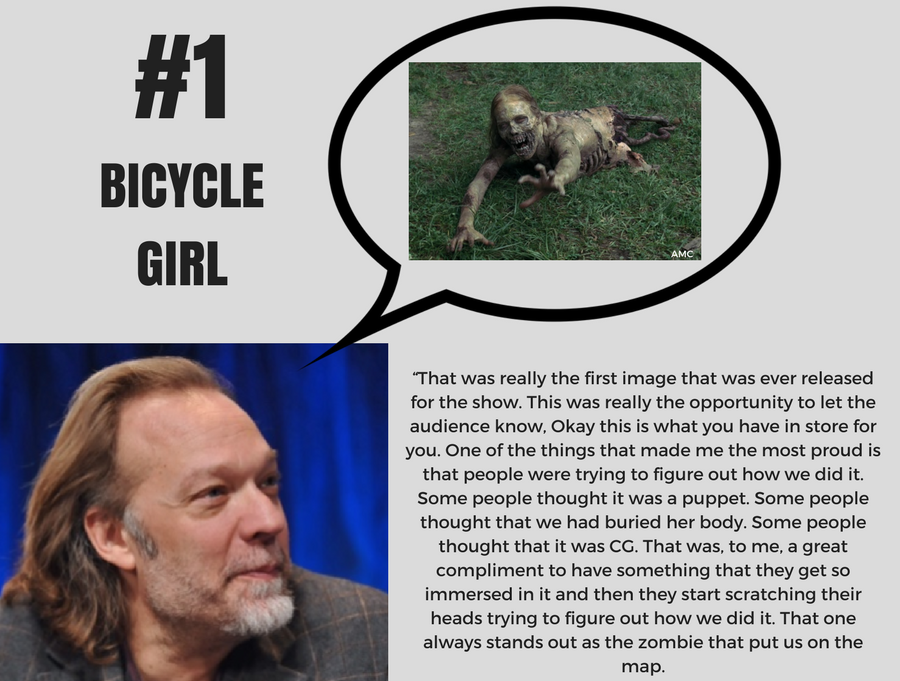 Next Article: These actors almost played Rick Grimes on The Walking Dead instead of Andrew Lincoln. In fact, one actually even had the part before him and had to turn it down!