From the moment Rick Grimes woke up from a coma in the hospital when the first episode premiered on October 31, 2010, there has been some debate about just how much time has actually passed since the dead began to walk the earth. I, myself, have gotten into some pretty heated conversations trying to set the record straight. Can you believe that some people actually think that even though the show has been on for 6
years, the same amount of time has passed in the show? I know, right? That would make Judith almost kindergartenage.

So let’s all go through the details season by season and day by day and get to the bottom and squash it once and for all.

Now it is not exactly known when the police chase took place just that it occurs sometime before the global outbreak. Also, even though it is not known where it originated, the virus arises approximately 194 days before Rick wakes up and it went global approximately 60 days prior as well bringing us to Day 59+ (2 months). He also meets Morgan and Duane on this day. Day 60+, Rick leave and heads for Atlanta and is later reunited
with Lori and Carl. Day 61+, Rick heads back to Atlanta to search for Merle and the quarry is attacked by walkers. Day 62+, The dead are buried, Jim is bit and Andrea has to put walker Amy down on her birthday. Day 63+, They arrive at the CDC after leaving Jim by the highway. Jenner lets them in and everyone eats. Day 64+, Rick and the group narrowly escape CDC moments before the building explodes. The group drives off (minus Jacqui).

Season 1 takes place over the course of 5 days.

Day 66+, two days after the CDC explosion Sophia goes missing. Day 67+, Carl is shot by Otis who takes him, Rick and Shane to Hershel’s farm. Shane shoots Otis. Lori, Glenn and T-Dog arrive at the farm as well. Day 68+, Glenn and Maggie pour Bisquick for the first time. Day 69+ to Day 70+ are spent looking for Sophia. Glenn discovers barn walkers and Lori confesses she is pregnant #whosthedaddy. Day 71+, Sophia is found. Hershel falls off wagon and Glenn and Rick go in search for him. Day 72+, They return with Randall. Day 73+ to Day 79+ are spent debating on Randall’s fate. Day 80+, Randall is taken 18 Miles Out. Day 81+, Dale is attacked and dies. Day 82+, Shane kills Randall and plots to kill Rick. Day 82+, the farm burns down and Andrea is presumed dead. Day 83+, the group finds each other on the highway.

Season 2 takes place over the course of 17 days. The time that passes between seasons 2 and 3 is about 7-8 months. Lori is about to give birth any day. 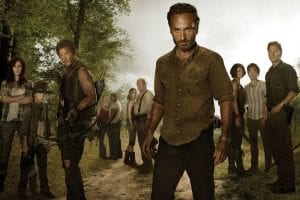 Day 300+, The prison is found. Day 301+, We find out what happened to Andrea who was saved by Michonne on day 84+. The prison yard is cleared of walkers. Day 302+, they find prisoners in the kitchen but Hershel loses his leg. Day 303+ to Day 308+, Governor runs the town of Woodbury. Andrea and Michonne are taken there and we find out what happened to Merle. Day 309+, Andrew let’s walkers into the prison. Lori and T-dog die. Rick gets a phone call. Day 310+, Michonne reaches the prison but takes a group back to Woodbury to save Glenn and Maggie. The Governor loses an eye. Day 311+, Daryl and Merle leave on their own. Day 312+, The Governor’s prison attack numero uno. Daryl and Merle return to the prison. Day 313+, both sides prepare for war. Andrea returns to the prison but ends up going back to Woodbury. Day 314+, Rick, Carl and Michonne leave to search for weapons. They meet up with Morgan and Michonne eats Morgan’s last peanut butter protein bar. Day 315+, Rick and the Governor meet. Day 316+, Andrea escapes. Day 317+, Andrea is recaptured and put into torture room meant for Michonne and Merle dies. Day 318+, The Governor’s prison attack numero dos. Andrea dies and the remaining people from Woodbury are taken back to the prison.

Season 3 takes place over the course of 18 days or so. Rounding it up to 3 weeks. Approximately 170 days or 6 months passes between seasons 3 and 4. Bob joins the group, the Governor meets Tara, Lilly, David and Meghan, and the group begins farming. 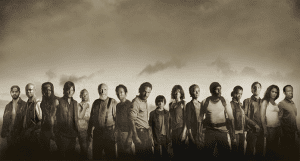 Day 500+, Group goes to the Big Spot for supplies. Later that night, Patrick becomes ill and dies, turns and enters D-block. Day 501+, Walkers attack
D-Block from within. Carol kills Karen and David. Day 502+, the Infected are put into Isolation and Daryl’s group search for medicine. Day 503+, Carol is exiled, Glenn almost dies and the group returns with medicine. Day 504+, The Governor’s prison attack numero tres. Surviving groups flee but are separated. We meet Abraham’s Army and Tara helps Glenn. Day 505+, Carl finds pudding but loses his shoe. Day 506+, Daryl and Beth play “never have I ever.” Day 507+, Beth is taken to Grady Memorial Hospital and Maggie searches for Glenn. Day 508+, Daryl meets the Claimers and
Maggie finds Glenn. Day 509+, Lizzie kills Mika, Abraham’s group arrives at Terminus and Beth wakes up at GMH. Day 510+, The Claimers attack but are killed. Day 511+, The Ringleader, The Archer, The Samurai and The Kid arrive at Terminus.

Season 4 takes place over the course of 11 days. 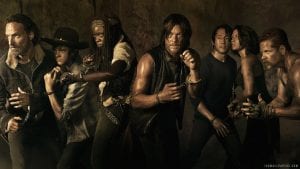 Season 5 takes place over the course of 36 Days (5 weeks). Season 6 begins by flashing back and forth through the course of a week or so. 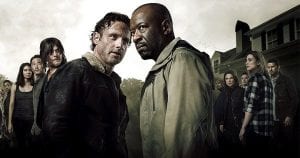 Night 547+, group tries to process what just transpired. Day 548+, Rick finds the walker filled quarry and a plan is made regarding the herd. Day 549+ to Day  552+, time is spent planning how they will lure the herd away from ASZ. Day 552+, plan is put into action unexpectedly and Wolves attack ASZ. Morgan tries to tame a wolf and Glenn goes dumpster diving. Day 553+, Glenn and Enid make it back to ASZ which is surrounded by walkers. Dwight takes Daryl’s bike and crossbow. Saviors are blown away and Carl gets shot again…STAY IN THE HOUSE CARL!!! Day 554+ to Day 614+ (2 months), ASZ tries to get back to normal. Carl’s eye in healing and #Richonne finally happens. Day 615+, group goes to the Hilltop Colony. Day 616+, Savior compound is attacked. Glenn makes his first human kill. Carol and Maggie are captured. Day 617+, Carol and Maggie kill their captors. Day 618+ to Day 624+ are spent healing. Day 624+, Morgan finishes the cell. Day 625+, #Caryl talk. Day 626+, Denise dies and Eugene bites the BIG ONE! Night 626+ or Day 627+, Carol leaves. Day 627+, Daryl, Rosita, Michonne and Glenn are captured by Dwight and Saviors. Rick
and Morgan search for Carol. Rick returns and a small group leave to take Maggie to the Hilltop. Morgan finds Carol hurt and Rick, Carl, Glenn, Maggie, Daryl, Rosita, Abraham, Eugene, Michonne, and Aaron meet Negan and Lucille.

Home » Uncategorized » The Walking Dead Time Line. ..Do you think you have it right?

3 thoughts on “The Walking Dead Time Line. ..Do you think you have it right?”