At this point, The Walking Dead has strayed so much from the source material that trying to make out what storylines the show is focusing on becomes a bit maddening. Last night’s episode, “The Key”, was another episode that continued to stray from the comics, in a big way, while introducing a possible character from a storyline that is way off in the show’s future. At this point, the comics pretty much come across as the skeleton that the show is basing itself on. The character names are the same and the DNA of the storylines are there, but outside of that, all bets are off. This can be seen mostly in the death of Carl but you can add everything that happened with Rick and Negan last night to that list as well. With that being said though, “The Key” was easily the best episode of this fractured somewhat infuriating season. 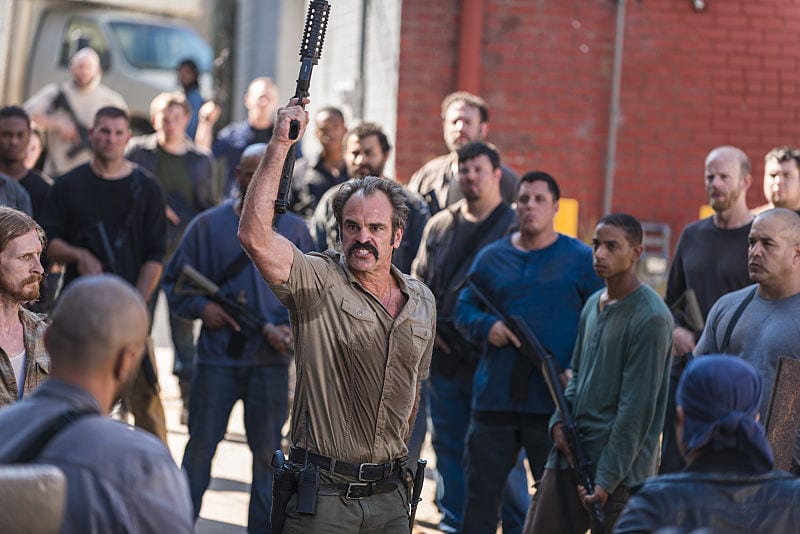 While the Rick and Negan showdown was easily the biggest plot thread of the episode we can’t ignore the fact that The Walking Dead might have inserted a way to make crowd favorite Negan a hero. Or at the very least, a figure who blurs the lines opposed to being the ultimate evil on the show. Not that I believe Negan is the ultimate evil, lately Rick seems to be filling that void, but the show wants us to believe he is. It’s clear that there is a pretty hefty difference between Negan and Simon whereas Negan looks to problem solve and rule and Simon, well, he likes to wipe out all problems. The Garbage People are case and point here. Negan sent Simon over to send a message, kill one if need be, and Simon decided that their betrayal meant they had to be taken off the board.

Let’s be honest, Simon being in charge of the Saviors is a lot scarier than Negan and the mustache only has a little bit to do with that. There’s that air of unpredictability that oozes from Simon. What’s this guy going to do? At least with Negan, we knew the kind of guy he is. Death and iron burnings are there to send a message but ultimately he wants peace between the people he governs. Negan is smart enough to understand that the people he rules may resent him but it’s a small part to play for being saved, and I truly believe that Negan thinks he’s saving his people. Simon is a wildcard, he’s the type of guy who would lie about abandoning a war with Rick in the name of survival to get Dwight’s allegiance only to flip that into kill everyone once he has control of the group. Simon is a much bigger problem than Negan. It’s hard to fight people you can’t reason with. 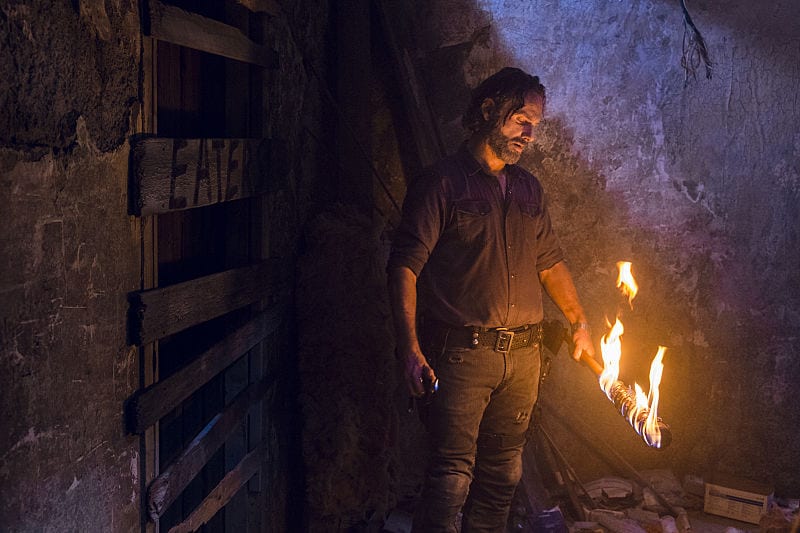 This all begs the question, how did Simon seize control of the Saviors? We have a car chase with Rick to thank for that. Anticipating an attack from the Saviors, Rick goes on the lookout but instead of alerting the group of the impending attack Rick decides to take matters into his own hands because he’s Rick and that’s what he does. Sure glad he’s listening to Carl’s dying advice. What follows is a car chase that puts Negan on the run and gives our first Rick/Negan showdown in a long time. Some shots are fired, some fists are thrown, Lucielle is set on fire (you read that right), there are walkers everywhere, but ultimately this encounter does one thing. It deals Negan his first couple of losses. Rick puts Negan on the defensive while opening his eyes to the fact that he may not fully control the actions of the Saviors like he’s believed. You know, because Simon killed the Garbage People. Something Negan didn’t know about until Rick told him. I also find it interesting that Negan instantly believes Rick here and doesn’t try to debate it but is smart enough not to reveal he’s lost a bit of control. There must be a small part of Negan that knew Simon was hiding something. All of this puts Negan on the run right into… Jadis. That is one pissed off garbage woman who believes Negan orchestrated the attack on her people which I believe is opening the door to that Negan turn I was talking about earlier.

Outside of all this though there were things going on at the Hilltop too. For starters, Maggie still doesn’t look even remotely pregnant which makes me wonder if this was ever actually a storyline, but more importantly “The Key” gave us another instance of Maggie being “tough” only to revert back to being Maggie. Last week it was cut the rations to the prisoners only to start feeding them like everybody else, and this week it was take a few hostages and steal their food rations only to meet their demands and send them off. At this point, I’d prefer if the show would let Maggie be Maggie instead of imposing these will she or won’t she type characteristics. From everything we’ve seen at this point we know that she’s not going to so let’s preserve the structure of the character please and thank you. 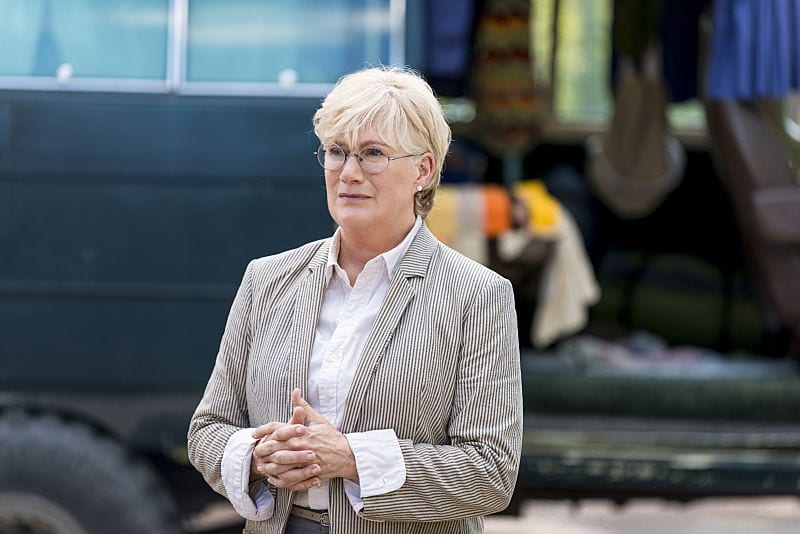 Who are these new people in search of records? Well, it seems quite likely that Georgie is actually Pamela Milton, a character just introduced in the comics. What’s Pamela/Georgie’s deal? Well, you’ll have to read the comics in order to get that information but I find it interesting that the show could possibly be jumping into the “New World Order” storyline next when we still need a resolution to the Saviors and haven’t even started the Whisperer War. This is what I mean about the comics not really meaning much to the television show. We’ll save that for another day though as Georgie gets her records and decides to give the Hilltop some food and a manual on how to build irrigation systems and windmills. This manual comes with the promise that the next time the two meet they can barter for more than records. Georgie believes that the Hilltop is the key to survival and expects great things. All very cryptic. No one in this world gives intel like that for records. One has to believe that the Hilltop will be paying in other ways down the line.

There you have it Geeklings, what did you think of this week’s episode of The Walking Dead? Were you happy to see Negan get brought down to earth? Were you impressed that Lucille is essentially fireproof? Is Simon a scarier leader than Negan? Who do you think Georgie is? Sound off in the comments below. As always if you’d like to talk more Walking Dead with yours truly you can find me on Twitter @iamgeek32. See everyone next week!

Home » Uncategorized » The Walking Dead “The Key” Review- Moving On