*NOTE. There are spoilers below from the most recently aired episode of The Walking Dead.

After weeks of Ezekiel boasting about the Kindom’s victories, their constant smiles, and lack of losses it seems that “All Out War” finally touched down with everyone’s favorite tiger wielder in what was hands down this season’s best episode. “Some Guy” was a heavy character driven episode, with Ezekiel at the center, as Khary Payton gave a dazzling performance exploring the charm, fears, and naivety of King Ezekiel and it all cumulated into an excellent hour of television. Normally I get a little frustrated with The Walking Dead when it slows down the main plot for these character-focused episodes, mostly because it results in wheel spinning, but “Some Guy” did that rare thing where they focused on two characters and still managed to bridge into the main “Rick Orchestrates A Number of Attacks” storyline. 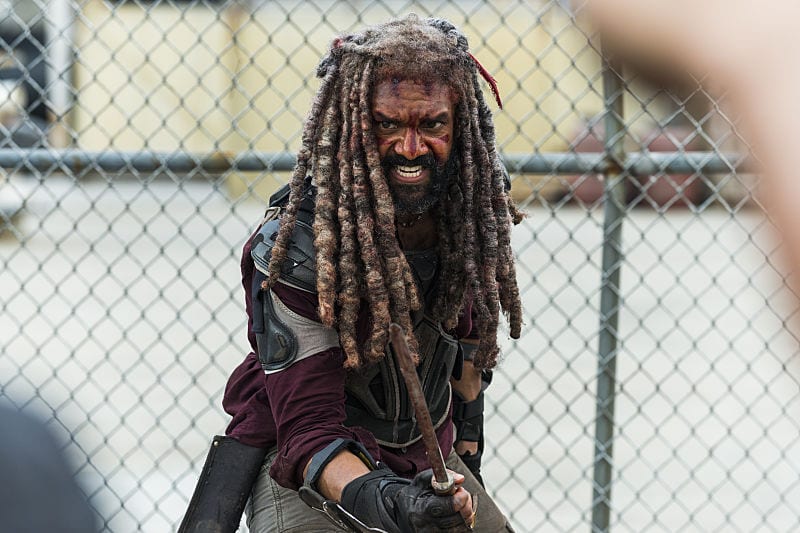 Starting the episode with Ezekiel prepping for King mode and delivering what was an excellent, yet, naive speech was a nice touch. It helped reinforce the idea that when it comes to leadership, Ezekiel is playing this like it’s some sort of game. I’ve spent a large amount of time this season voicing my concerns about how Ezekiel is treating this war like live action role play, and this opening speech did nothing to dissuade me from that. Yes, it sounds great and gets the blood pumping but at the end of the day, the speech is all about Ezekiel. He is pandering to the affection of his people, who doesn’t love a massive group hug, and not taking into account that real lives are at risk with this journey. That’s why the juxtaposition of the speech right into the aftermath of the shootout was perfect imagery. First off, holy crap those guns are ruthless. I haven’t seen a battlefield look that gory since I watched Saving Private Ryan, not sure if I’m exaggerating here, and it really allowed us as an audience to understand just how outmatched the Kingdom was in this situation. Ezekiel lead a charge that resulted in some small victories, and that’s cool and all, but ultimately those small victories meant nothing. His charge gets everyone but himself and Jerry killed (Jerry lives!!!) negating any progress he had made prior.

Scrambling for his life, suffering from a leg wound, sans tiger, Ezekiel finally starts to understand the weight of the game he’s playing. Playing King, talking with accents, and “rallying” the troops is a fun game. I imagine that’s what people love about live action role play, but when you take those ideas and principals you need to hold the real world into account and Ezekiel makes the misconception that his LARP and this war are the same things. They obviously are not. There’s no game of LARP that involves bullets that will leave your guts splattered all over the floor. It’s a tough lesson for Ezekiel to process and one that forces him to turtle pretty hard.

His brief role as hostage with the super creepy Savior, seriously, this dude made me all types of uncomfortable, was the first step of many throughout the episode that just highlighted how powerless the King really is. I know that he was injured but even Ezekiel’s attempt to fight free came across as defeated and lackluster and was immediately shot down. If it wasn’t for Jerry and his battle ax I have little doubt that Ezekiel would have allowed himself to die on the field of battle just like his followers. At that point, he’d already given up. It took a bit ofencouragement from Jerry, “dude, you’re the coolest”, to at least talk the King into making a last stand against the herd of Kingdom zombies heading their way. But don’t call him “your majesty” because it seems that Ezekiel’s days as King are beyond him.

Luckily, Carol stopped her Rambo mission long enough to save the two but it allowed the super guns to get away… for a minute. Before I circle back to the super guns, I’d be remiss if I didn’t talk about how much of a badass Carol is. What makes her Rambo routine work so much better than say Morgan’s Terminator act is Carol’s conviction. Here is a character who has taught herself to survive and has suffered through the ills of this new world. Watching her systematically take out the Saviors was awesome. It was moderately believable, how did she get in the ceiling you guys, and just all around awesome. Carol continues to be the one character who has rebuilt herself the best and anytime Melissa McBride is given the chance to shine we all win. Seriously, I love watching how quickly Carol can turn her personality to someone else in order to fit the needs of the situation. Plus Carol made sure the King and Jerry walked out alive, and for that we’re grateful. 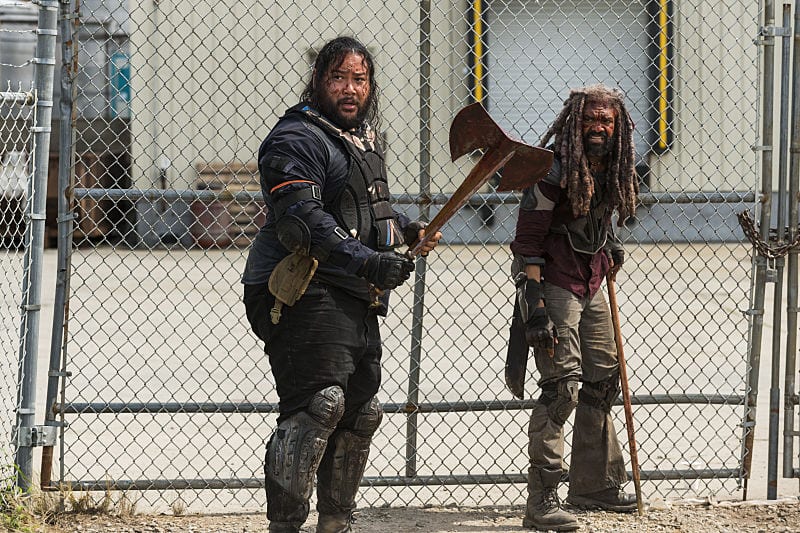 As for those super guns, this is where our storylines intersect as Daryl and Rick start a high-speed chase to prevent the weapons from reaching the Savior’s compound. This was a fine scene that consisted of more flawless motorcycle shooting from Daryl and Rick Indiana Jonesing a jeep (loved that!) and ultimately resulted in the stopping of the gun shipment. Yay! This scene was mostly intended to get the blood pumping and to further the plot a little bit and I’m super excited about that. Normally this type of episode would sacrifice story for character, and normally that’s not a thing that bothers me with fiction, but The Walking Dead has a habit of doing it too often. There are times where it’s okay to use the story to further your characters. I was pleased to see this episode start to bring things together a little bit.

If you thought the death of the majority of the Kingdom’s soldiers wasn’t enough to break Ezekiel then you really don’t understand this universe. As Jerry, Carol, and the King try to make their getaway they are pursued by a number of relentless, toxic walkers. Ezekiel, now in full suicide mission mode, almost begs to stay and fight them off so Carol and Jerry can escape and naturally meets resistance. This whole standoff was a bit sad as it reeked of a man who had lost his identity searching for one more moment of glory. Ezekiel may think the King is dead but it’s clear in that moment he’s thinking of the stories that will be told of his noble sacrifice. It’s his only move to try and rectify his cause and it gets taken away in the most heart-wrenching fashion possible. Shiva, who had been missing all episode, decides to make her dramatic return in order to fend off the zombies so her master can make an escape. It is clear payback, with love, for Ezekiel saving her life once upon a time. Shiva is able to fend off a few walkers but it’s not long before she is overcome and eaten. It’s horrific and heartbreaking and luckily Hudson the Cat was sleeping during the scene and wasn’t traumatized… Shiva was his favorite character. 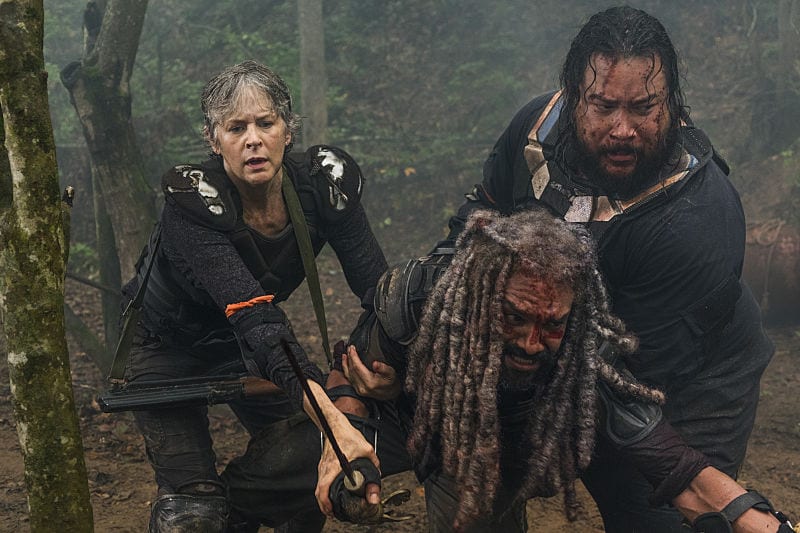 Jerry, Carol, and Ezekiel arrive back at the Kingdom highlighting their massive loss as the town folk of the Kingdom coming rushing out to see their loved ones. Instead, they see a man who once believed he was King, limp off towards his home with no speeches and no words of comfort or loved ones. Just a broken man without his tiger or his army leaving us wondering if Ezekiel will ever be able to recover from this and what will be the state of the Kingdom.

What did you guys think? Did you love this episode as much as I did? Were you heartbroken with the loss of Shiva? Can Ezekiel recover from his faulty leadership? Will we ever see Negan and Michonne again? Sound off in the comments below. If you’d like to talk more Walking Dead with me then you can find me on Twitter @iamgeek32. Take your time and mourn the loss of our favorite tiger, and please, no one tell my cat. I want to break this to him gently.