The end of Season 10 will finally happen on October 4 at 8 p.m.  Last we saw of Negan, he was in the hospital comforting Lydia.  However, we’ve been given a photo of him in some sort of confrontation with Daryl.  We’re also anticipating that Negan and Maggie may end up seeing each other and will that mean Maggie may try to kill Negan? We aren’t sure. But some of the other things going on outside of The Walking Dead have us concerned that Morgan’s time as Negan may be up or at least as a regular character on the show.

Reports have suggested Morgan will soon be joining an acclaimed new series on Amazon Prime Video, The Boys, as well as the DC Extended Universe.

After publicly campaigning for a role on Amazon Prime Video’s superhero series The Boys, the show’s head writer Eric Kripke confirmed the two are currently in talks.

Season two of The Boys will be released on Amazon on September 4th 2020, but ongoing reports suggest Morgan could join the cast in season three. 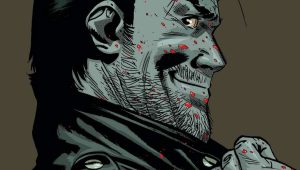 Also, fans got an update on the comic book version of Negan. This past week, Image comics and creator, Robert Kirkman, released the one-off, “Negan Lives.” The book catches readers up on the current status of the character since the comic book series ended just one year ago.

What do you think of the possibility of Morgan moving on to a new show? How many more seasons will The Walking Dead last? We’d love to hear your thoughts in the comments below! Also, check out the Season 2 trailer for The Boys!

Home » Featured » The Walking Dead: Season 10 Finale – What Will Happen to Negan?

One thought on “The Walking Dead: Season 10 Finale – What Will Happen to Negan?”