This past weekend, viewers had to say goodbye to a member of the Grimes family: Carl. The heartbreaking episode was rightfully titled “Honor” seeing as it was an honor to see Carl grow up and evolve in the apocalypse and for the fans and cast to know and love Chandler Riggs over the years.

For a while, Carl seemed invincible, but his death brings us back to the notion that yes, anyone can die in this world. Because of this, fans are beginning to suspect that Carl’s father, Rick is not long for this world. 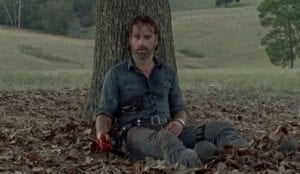 Rick did everything for Carl, everyone he killed and everyone he brought into the community was for Carl to have a better life. Now, at the end of the mid-season premiere, we see a defeated Rick Grimes leaning against a tree, blurry-eyed and bleeding out.

Andrew Lincoln who plays Rick on the hit series, had this to say.

“I was very worried, especially when we did the makeup test and I said, ‘He looks like he’s lost quite a bit of blood. Do we want him to be this white?! Can we make him look like he’s got a pint of blood in his body?!'”

What would The Walking Dead be like without Rick Grimes?

Luckily, creator, Robert Kirkman has said that this scene is not meant to set up a Rick-less world.

“I don’t expect that,” Kirkman said. “That’s not an intention there. I’ve said from the very beginning that no one is safe. I do strongly feel like the show could survive without a Rick Grimes. There’s certainly a lot of story to tell without that central character. I’ve talked a lot about how Rick Grimes will definitely die in the comic book series at some point before the series’ conclusion, just because I want to make sure everyone knows that no one is safe. But I don’t think you should read too much into that.” 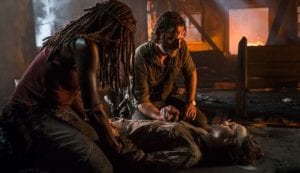 The Walking Dead is a show that has proven to survive and change with the deaths of major characters.

Lincoln went on to add,

“You just witnessed the biggest bereavement to date [with Carl], certainly in Rick’s world. The result of this all happening is, hopefully, a compelling and exciting drama — with the keyword being surprising. It’s a very difficult question. I love doing the show; I love the character; I love playing Rick. It’s been one of the most satisfying, thrilling and rewarding parts of my career. But I have always said that I want to finish in the way that we began: big scale, pared-down vision of the world. There are lots of unanswered questions and we owe a debt to all of the viewers to answer a few of those. So yes, once they’re answered, there is an endgame. I’ve said it before. There’s certainly an endgame in my head. Whether or not that’s the same endgame that’s in the producers’ heads or the people I work with, is another matter. That’s open for discussion.”

So Rick is safe for now, but then again, anything can happen in a zombie apocalypse.

Do you think Rick will die soon?

Home » Featured » ‘The Walking Dead’s’ Robert Kirkman on Speculation of Rick Dying: “That’s not an intention there.”