Important-Spoiler Warning! Do not read ahead unless you’ve seen the latest episode of The Walking Dead, The Big Scary U.

Season 8 of The Walking Dead has sure kicked things up a notch and it’s been great to see our favorite characters back in action! We had a tough scene this episode which resulted in Daryl punching Rick out of frustration.

The two make up but briefly, go their separate ways. We’ve got some reminders for you as to why these two have a bond that can never be broken!

Over the course of the past 7 seasons, these two have developed a powerful friendship and a mutual respect for each other.  We love watching Rick and Daryl conquer the zombie apocalypse together!  In honor of their amazing brotherhood, we thought we’d take a look back at some of our top most favorite Rickyl moments throughout the course of the series.

Just in last week’s episode, in season 8, episode 4 titled Some Guy, our survivors are in the midst of carrying out their master plan to defeat Negan and the Saviors.  Rick and Daryl team up and hunt down a couple of saviors toting some heavy artillery.  The two work together to track down the truck and eventually take out the driver after Rick jumps from his moving vehicle into that of the savior’s before they both drive off the road and tumble down a hill.  Daryl, who was trailing behind on his motorcycle, rides up to the accident site, throws his bike against the guardrail and runs over to make sure Rick is ok.  The look of fear and concern on Daryl’s face is enough to show his kindship with Rick.  When Rick begins to crawl his way up the hill and greets Daryl with a bro-like, “hey,” Daryl breathes a sigh of relief before extending his hand out to help Rick up.  It’s a small, subtle moment between these two but, it’s powerful enough to convey Daryl’s respect for Rick. 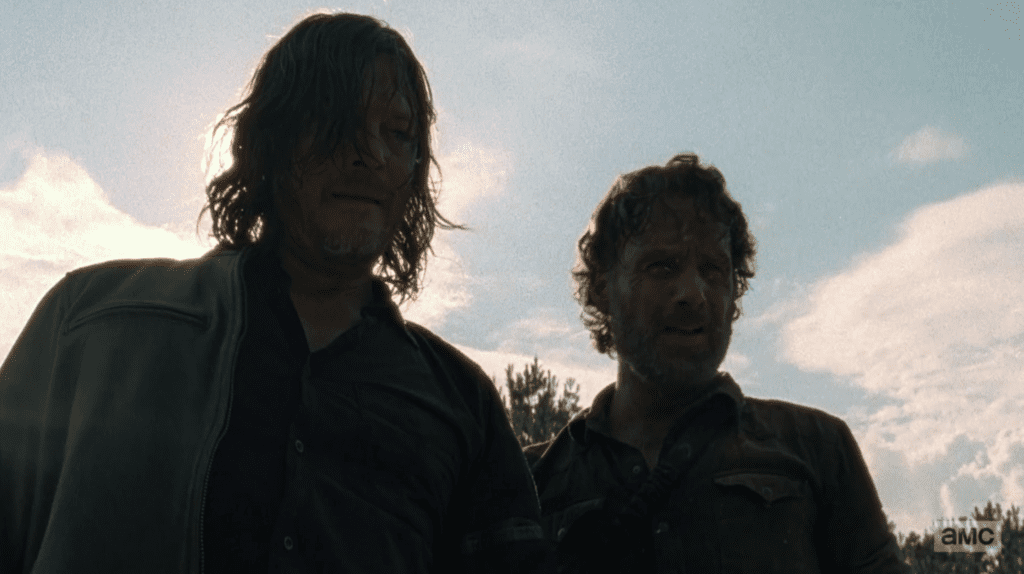 In season 6, episode 10 titled The Next World, Rick and Daryl head off on a supply run together not knowing what they would encounter on such a simple mission (spoiler alert!  They encounter Paul “Jesus” Rovia and things get totally crazy).  This entire episode was basically a Rickyl love fest from the moment they get into the car to head out to sharing snacks with each other along the way,

Like true best friends, these two don’t always see eye to eye, especially when it comes to music.  Who can forget the scene right after they started their road trip when Rick pops in a CD of his own choosing and Daryl pleads with him not to play it?  Rick rocks out while Daryl looks less than thrilled in the passenger seat.  Just because it’s the apocalypse doesn’t mean you can’t have a little fun, right?  This adorable moment gave us serious friendship goals!

But it’s the most touching and heartfelt moments between these two characters that really display how much these two care about each other.  In season 7, after Daryl escapes from Negan and the saviors at the sanctuary, he ends up at Hilltop to recover.  Rick and some of our survivors also meet up there shortly after their second showdown with Negan.

When Rick walks through the gates into Hilltop, he’s greeted by Maggie and the rest of the community.  Much to his surprise, Daryl is there!  The two see each other and exchange a very manly head nod before Daryl completely breaks down.  Daryl is undoubtedly feeling guilt for contributing to Glenn’s death and, upon seeing Rick, he lowers his head and begins to cry.  Rick gives him a big ol’ hug in an effort to console his hurting friend.  It’s an emotional and touching moment which is immediately followed by an uplifting “the band’s back together” type moment.  Seconds after, Daryl then hands Rick a gun from his back pocket symbolizing that, once again, Daryl is ready to follow Rick, wherever he may lead them.

Nothing can top our most favorite Rick and Daryl moment which came a little earlier on in the series.  In season 4, the group has gotten separated from each other and Daryl is mixed up with Joe and “the Claimers.”  Rick, Michonne, and Carl end up crossing paths with the group (and Daryl) and,  the claimers got a little more then they bargained for when one of them tries to harm Carl.  Rick goes full-on beast mode and bites out Joe’s throat before completely gutting him.  It was a traumatic moment which leads to a candid heart-to-heart chat between Rick and Daryl.  Daryl is expressing remorse for getting tangled up with Joe and the claimers and Rick tells him that none of that matters.  The fact that he’s back with the group now, at the moment, is everything and that’s all that matters!  Rick then looks right at Daryl and, from the heart tells him, “you’re my brother.”

Our hearts melt every time over this beautiful bromance and we hope to see Rick and Daryl continue to work together for the greater good!

What is your favorite Rickyl moment?  Let us know your thoughts in the comment section below!

The Walking Dead “Some Guy” Review- Ezekiel Loses His Smile

Negan’s Back in This New ‘Walking Dead’ Sneak Peek