Last night’s episode of The Walking Dead was actually a lot of fun. I know that seems almost like a taboo word when referencing The Walking Dead but none the less, “Say Yes” was a fun episode that allowed us to see the lighter side of two pretty intense characters. If you read my preview yesterday (in case you didn’t and want to save face, just click here) then you know that show casing a small group of characters has been a frustrating story telling method for me but even me in full grumpus mode can’t deny that this episode was enjoyable.

not a whole lot has happened on the Rick and Michonne front. There was that time that Jesus walked in on them sleeping naked (which is one of the weirder sentences I’ve ever written) and the argument they had about Negan, but outside of that it has become one of those relationships that we know exists but hasn’t fully been exploited. I think after last nights honey moon zombie escapade we have a better understanding of where the two of them fall. And they in looooooove. As a matter of fact, Rick holds Michonne in very high regard. That whole “I don’t want to rule the new world, I want us to rule the new world” not only is the ultimate bed room talk but goes to show that Rick values Michonne more than anyone else. Coming from Rick, that’s pretty heavy.

What else happened in this episode besides Apocalypse Love Fest? Well, during their travels Rick and Michonne stumble upon a military base… carnival? I guess even military members occasionally need to let loose on a Ferris Wheel (not me though, those things are just circles of doom). I still don’t understand why there was a carnival set up on a military base, but the fact that it was discovered was a huge win. This place had everything Rick could have hoped for; food, beer, and weapons. Not to mention cots, and after mattress-gate, here’s hoping that Rick and Michonne took a couple back to Alexandria.

Ultimately the weapons on the military base had to be won which lead to two of the best zombie killers killing zombies, and it was all well and fun. Until Rick almost got himself killed trying to kill the world’s worst CGI’ed deer. Seriously, it looks like the budget for the rest of the season might all have been spent at this point. I get the sentiment of Rick wanting to do something for Michonne to atone for his behavior, but come on. Let this be a lesson, romance in the zombie apocalypse will get you killed.

There was a brief period where Michonne actually thought Rick was dead (no one fell for that, did they?) and went into full give up mode, which was upsetting. I would’ve hopped she would have been stronger then that, but I guess when one brings her past into account and the fact that she’s even able to love now, yeah, I get it. But still, you’re better then that Michonne. Turns out Rick is fine and he shows himself right as Michonne is about to become chow and together they kill all the zombies and share an epic hug and gather up all the weapons. Yaaaaaaay!! 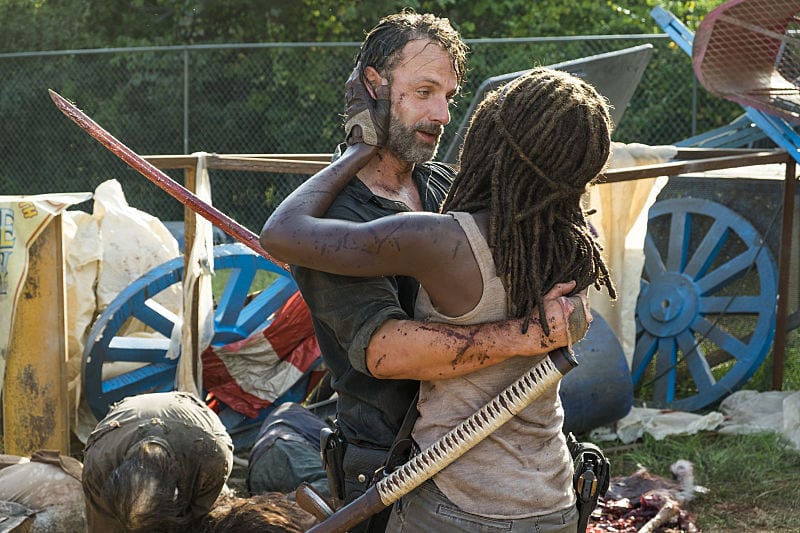 Rick and company take the new haul of guns, over sixty, to the Whisperers (umm, trash people) and get told it’s not enough. Well, crap. For a minute there I thought maybe we had made some progress on this story but nope. Just more going around in circles. With over sixty guns not being enough it makes me wonder just how many people are in this trash group. I’m pretty sure there aren’t sixty people in Alexandria who could be wielding guns and going to war. You have to wonder if this trash group is that big or just greedy. Rick concedes to the leader of the trash people, Jadis, that he’ll find more guns and after some intense bartering he’s able to take some guns back to Alexandria and keep the cat he stole for Michonne. Love prevails again!

The episode closes with Tara, who has been riddled with guilt and conflict all episode, seemingly telling Rick about the ocean side weapons stash thus rendering this episode fun but fruitless. This is where I get frustrated with this show. I enjoyed this episode, I really did, but it did nothing but spin wheels and didn’t progress the story at all. I loved that we got to see these different sides of Rick and Michonne and I appreciate that it gives new depth to their characters, but it’s a little late in the season to be doing that. Those character advancements should be coming in smaller key moments not in whole episodes dedicated to them. So while this episode may have been frustrating in it’s advancement of the story at least it was fun. I suppose there’s that. 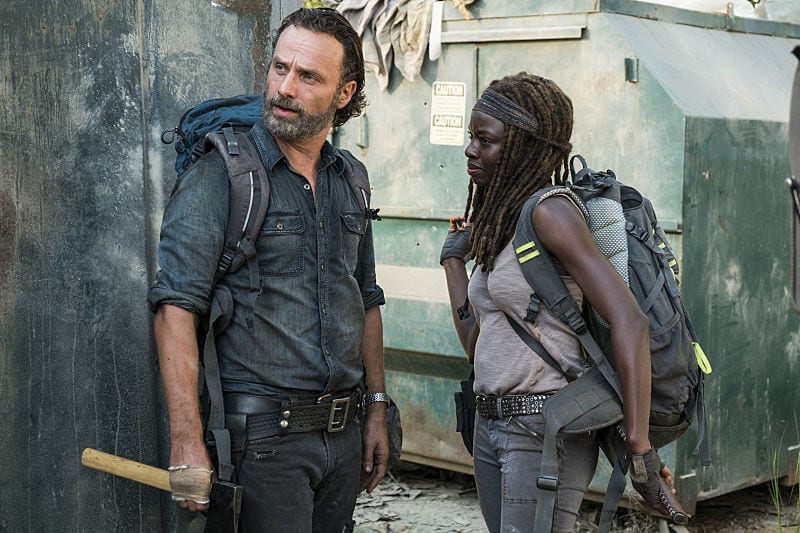 There you have it Geeklings, what did you think? Did you guys enjoy this episode? What did you think of these lighter sides of Rick and Michonne? Are you happy that Tara is finally speaking out about the ocean city? Sound off in the comments below. If you want to talk The Walking Dead further or anything else geeky you can find me on Twitter @iamgeek32. Until later in the week Geeklings, I’m out of here.

Home » Featured » The Walking Dead Review- We Keep the Cat