When we look back on the seventh season of The Walking Dead we will say that it was bookended by two emotions that tend to go hand in hand. At the start of this season we were in the pits of despair. From a show standpoint, we had never seen our characters so low and beaten. Defeated doesn’t even seem like the right word. They were broken. Negan’s introduction not only was impactful but stripped our survivors down to their bare bones. Everyone, everyone, needed this season to find who they truly are and the journey wasn’t always pretty. I’m not talking about the ups and downs of the episodes but more on the drive of our characters. We had never seen Rick or Daryl this shattered before nor had we seen characters truly thirst for revenge like Sasha and Rosita. The grueling nature (and depiction) of Abraham and Glenn’s deaths were more than just Game of Thrones esq television telling, they were the catalyst to making our characters whole in a way we haven’t experienced before. Which brings us to the other side of the bookend, hope. Out of this despair and defeat our group of survivors eventually re-built themselves on the resilience of hope. And while the season premier, which I count as one of the shows best episodes, presented this world at it’s bleakest, I would argue that lat nights season finale showed us that not everything has to be that dark. That hope can exist in a world that continually wants to dispute and disprove the notion. After last night we are on the precipice of war. The shots have been fired, and in some cases mauled, and next season looks to take the idea of hope and show why it’s worth fighting for. The long journey of season seven was to find and re-establish just what our survivors are fighting for, and next season will be their struggle to show why the idea of hope in the zombie apocalypse is worth fighting for. 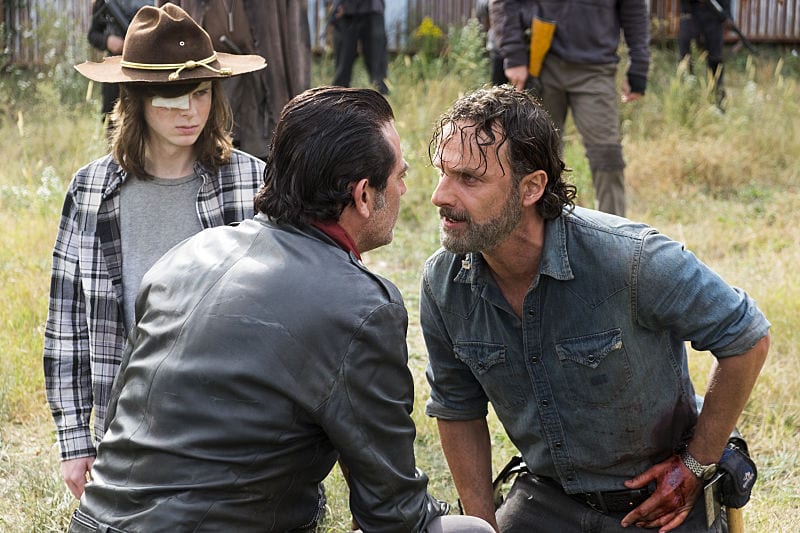 There’s no real denying the fact that The Walking Dead kind of slow burned the start of this war, the story telling up until this point had seemed stalling in nature, and it’s evident that season seven was not about the war itself but making our characters understand what it is they were fighting for. The hope of a better tomorrow. Throughout the series we’ve seen Rick want to make the world a better place for the future, and while his actions at time have been questionable (my man rips throats out with his teeth), I don’t think that mission has ever really strayed. Granted, we all lose track of how to get there at times and the zombie apocalypse is a world that could easily deter anyone from understanding what they are truly fighting for, but what makes Rick such a strong character is how he always circles back to the need of re-building the world. Each time he strays from the path he comes back with a better sense of who he is and what is needed to achieve their ultimate goal. Last night saw the Rick Grimes that we fell in love with. I absolutely loved the juxtaposition of that scene between Rick and Negan. Here we were again with Rick on his knees, seemingly defeated, and Negan in the proverbial batters box waiting to take a swing, yet this time Rick didn’t budge. There was no vacant stares, no shaking, no crying just the will to live.

In the premier when Rick told Negan he was going to kill him the words almost rung hollow. In all honesty, Rick was in no position to be making those threats and I believe that’s why they came across as flat. There’s a good chance that Rick didn’t believe them either and just thought they were what he was supposed to be saying. But last night when he looked at Negan and promised to kill him there was belief and vindication in the words. No matter what happens between the Saviors and Alexandria Rick will not stop until Negan is dead, and for the first time it looked like Negan really believed in Rick’s conviction. I won’t say that he was scared, because at the time Negan was again holding all the cards, but I think for the first time he fully understood Rick. He understood the Rick Grimes we’ve been watching for the last seven years. That he is a caged animal who will do anything to survive and protect the ones he loves.

And then an actual caged animal showed up and flipped the script. Take that CGI deer! 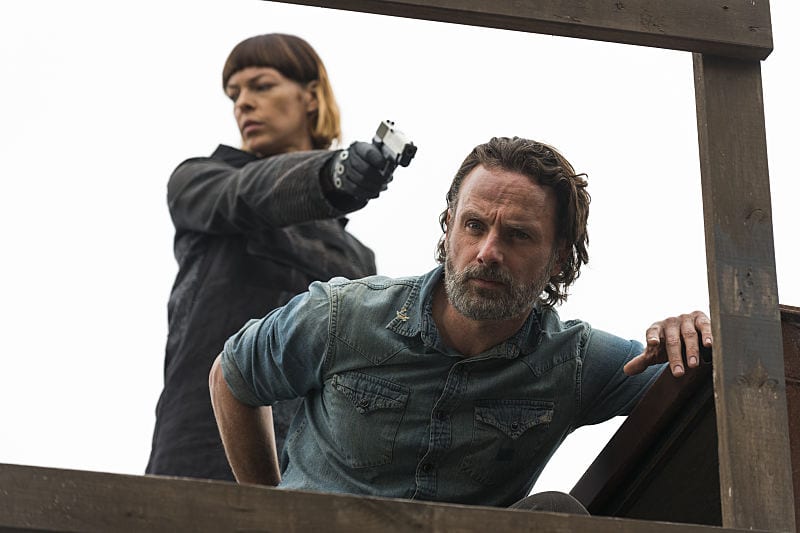 I said yesterday in my preview, that I thought that the Whisperers/Garbage People would be the ones to rat out the revolution and I was right. That’s a bit of a humble brag but I saw their betrayal as lacking much emotional payoff mostly because there was no sign of it. Turning the guns on Alexandria seemed a little out of left field and done more for shock value. I may have muttered a “son of a b”, but not because I was disappointed but because it seemed so obvious and non important. Clearly this is a group of people who can’t be trusted. The show established early that they are out for their own benefit and watching them retreat as the Hilltop and the Kingdom arrived only helped further prove that. We are not done with the Garbage People. Not by a long shot. Whether or not they turn into the Whisperers from the comics is yet to be seen but I feel that the wheels have been put into motion there. Only time will tell I suppose.

I have to say that I took some satisfaction in watching Negan and the Saviors retreat, and that’s coming from someone who believes Negan is the best thing to happen to this show in some time. I don’t find myself rooting for him but I understand him. It’s easy to write Negan off as a villain, hell, when we first met him he smashed in the heads of two main characters with a barbed wire bat, but there’s some depth there. Season seven has done a good job of showing the grey areas between Negan the ruthless and Negan the leader. I do believe that he truly wants the best for his people, and himself (duh, dude’s got a slew of wives), and while his actions may raise eyebrows and make us cringe we need to ask ourselves just how different from Rick is he? Going with my theme from earlier, the two are bookends fighting for the same cause. Survival and a better future. I hope for season eight they keep Negan’s background vague as I don’t need to know who he was before the apocalypse. He could be a postman or a barista for all I care, the most important thing about Negan is that he is a product of the world he lives in. Just like Rick.

The board has now been reset and we find ourselves going into season eight with a clear objective. Kill the Saviors save the world (yes that’s a play on Heroes, no I’m not ashamed). Rick and company are no longer just fighting to get rid of the villain but to preserve hope. The hope that they can make something out of this new world. Something worth living for. 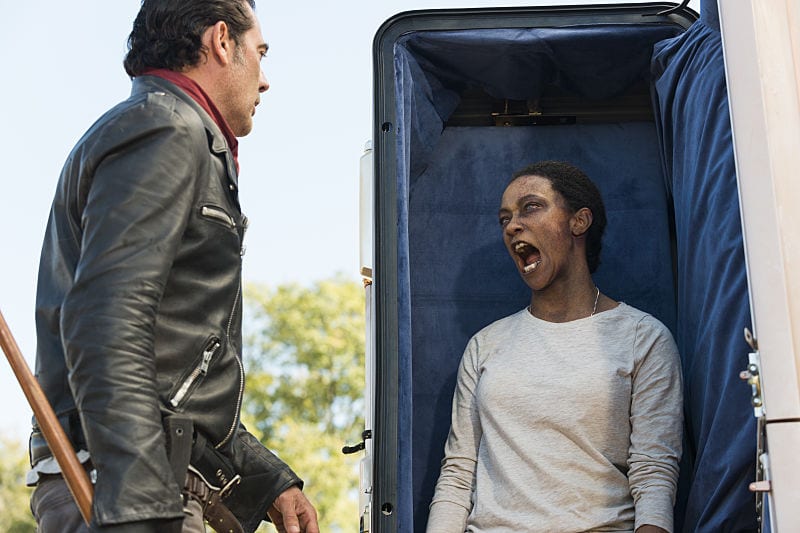 There you have it Geeklings, my last Walking Dead review for the season and I have to say this has been an absolute blast for me. Writing these reviews every week for you has been one of the highlights of my Fan Fest career and I look forward to spending more time with you. As soon as next week you can catch me here on Tuesday’s with my Better Call Saul reviews. In the mean time, what did you guys think of last night’s finale? Were you happy to see our group of survivors stand up? What do you expect for season eight? Sound off in the comments below. As always if you want to talk Walking Dead or anything else geeky you can find me on Twitter @iamgeek32. Thanks for letting me spend the time with you. Hope you enjoyed it as much as I did.