At it’s core, The Walking Dead isn’t a zombie show. It can’t be. After awhile the shock value and terror of the zombies will wear off and the audience will grow bored. Think of it as a jack-in-the-box, where the clown jumps out at the end of the song. You do it long enough then you’re going to know the clown is going to come out and it’s going to lose some of that charm. This is with the very loose concept that clowns can be charming. We all know they’re evil creatures sent to haunt our dreams #justthefacts. That aside, we don’t keeping tuning into The Walking Dead just for the zombies because a zombie show (or movie) won’t last that long if we do. Zombies are slow (hopefully), are easy to dispatch, and have no real character. There has never been a zombie who had the romantic nature of a vampire. There has never been a zombie that we as a society looked at and said, “nah, he’s just misunderstood”. Zombies themselves aren’t interesting but what they do to the world is. Which brings us to the “why” we watch The Walking Dead, and that answer is simple. We watch for the characters and to see if they can overcome this apocalyptic world, and in most cases, their own demons. I’ve said this for years, but I strongly believe that zombie stories, if done correctly, can be such tremendous character studies. When characters have nothing else to lose and the world is stripped bare that is when we really start to understand the essence of who they are.

Last night’s episode of The Walking Dead reminded us that when this show is at it’s best it can really delve into character study and emotion, and for me “The Other Side” was the show at it’s best. As a matter of fact, I’m having a tough time remembering an episode, outside of the premier, that I liked more this season. From start to finish this episode did a number of things right. The opening with no dialogue not only helped to build tension but started playing on the emotional chords early. I felt myself instantly drawn in because this was a different presentation. We saw Maggie and Daryl interact but nothing was said between either of them, we saw Sasha struggling to find her place at the Hilltop, and we saw Gregory become more and more paranoid. I don’t know how many of you saw the movie Drive, but that’s a perfect example of when less is more. When you can see your characters living opposed to being told they are. There is plenty that can be said in facial expressions and body langue and when the starting credits began to roll, I found myself hoping for an entire episode of The Walking Dead without dialogue. Just the sounds and the actions of our characters. How heavy would that be? And before you go poo-pooing the idea, I suggest you watch BoJack Horseman’s “Fish Out of Water” episode because that thing hits like a punch to the gut. It’s the perfect example of how you don’t need dialogue to tell your story. You just need heart and depth. 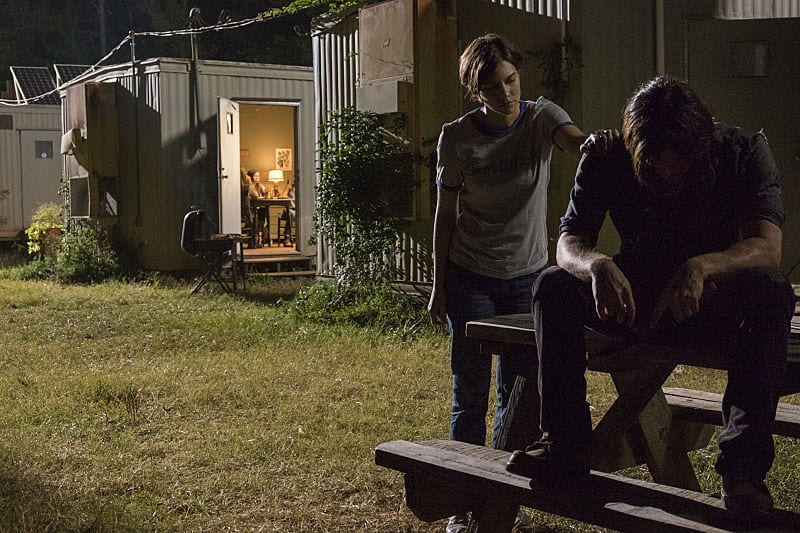 Last night we saw as a number of characters (Darly, Rosita, Sasha, and in some ways Gregory) as they were stripped down and presented to us as who they are not who they want to be. Look at Daryl for example, can you believe this is the first episode where he’s really been confronted with his role in Glen’s death? Yes, when he was with the Saviors he had his break down before the dog food sandwich, but now that he’s with his friends he has to face the consequence of his actions. Those consequences leave Maggie to birth a child without a father. Those consequences have left the group without it’s heart, and because one, little, impulsive, protective punch, Daryl feels like he’s robbed everyone. He can barely make eye contact with Maggie, and it’s not because of hair issues, it’s because of shame issues. The moment the two of them share in the cellar is powerful as it helps kind of clear the air for both of them. Maggie doesn’t forgive Daryl but absolves him through Glen’s words. Using Glen’s heart and beliefs that Daryl is one of the good ones some of that shame and guilt is able to be shed. Daryl can start living for Glen as one the “good ones” and stop letting his life be run by shame and guilt. That’s some heavy shiz guys.

The emotional anchors of this episode though were Sasha and Rosita, two characters who haven’t really had much purpose as of late. Sasha hasn’t been on enough this season for me to really feel invested in her journey or in her pain. Yeah, it’s sad that she lost Abraham but the show’s ambiguous nature of their relationship has kind of hindered any emotional out pouring I have for her. Were they just buddies or was there a little more going on? I’ve never felt clear on the subject. Rosita on the other hand has clearly gotten on my nerves as of late. She’s just trying too hard to find a purpose but is sacrificing the relationships she has left in order to do so. (I swear to God if you yell at Tara one more time!) These two characters on their own haven’t had the impact that I’ve wanted, but put them on a shared journey together? Suddenly all the feels are present. 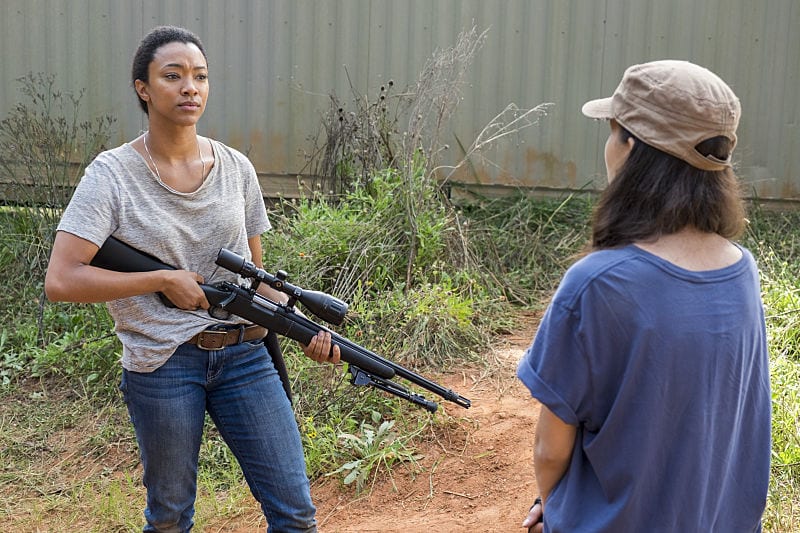 Sasha did the one thing no one else on this show has been able to do, get Rosita to explain herself. Not just her current actions but who she has become in this world over run by zombies. What we learn is Rosita is a bit of a sponge. She spends time with different individuals or groups and takes what she needs from them. Whether it’s how to hot wire a car, tie a knot, or diffuse a bomb (sooooooo happy Sasha asked that question), Rosita has become a natural survivor. I couldn’t help but think back on some of these past reviews where I bring her to task, and feel that I understand Rosita a little better now. The death of Abraham, and the powerlessness of it, has left Rosita kind of floating in the abyss. She has been used to living a life where she can apply all of her skills now she doesn’t know which ones will keep her alive. That has her disjointed, isolated, and lost. This conversation with Sasha helps bring her back to earth. Reminds her that she’s more than just one thing. She’s a survivor and she’s been doing it this whole time.

Which is why I grew frustrated with Sasha’s decision. I get it but I don’t think it’s fair either. Both Rosita and her had literally just finished a conversation discussing how Abraham didn’t die the way he would have liked; fighting and dishing out great swear combos. Then Sasha goes and locks Rosita out of getting her revenge on Negan. Tells her, it’s not her time. We all knew that there was no way this assassination attempt was going to be a success, otherwise what’s the point of this season, but to rob Rosita of the choice of giving her life for the cause is kind of selfish of Sasha. I really believe that the action itself comes from a good place, but it shouldn’t have been hers to make. Instead, Rosita has to go on the run and luckily stumbles into the Bat Symbol equivalent of Daryl Dixon. Come on, you all thought the same thing when you saw that shadow on the wall. 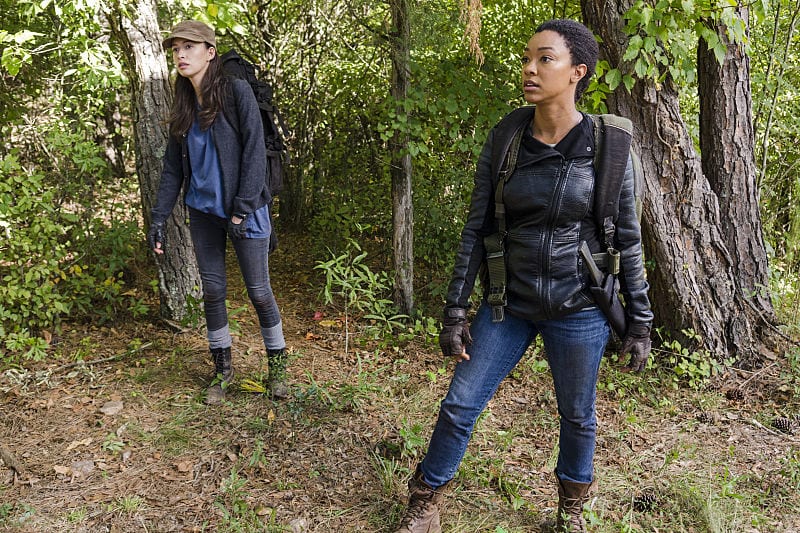 There you have it Geeklings, what did you think? Did you guys love this episode or just see it as another filler episode? Do you think Sasha’s made the right choice or was it a bit selfish? Do you have a better understanding of Rosita now? Sound off in the comments below. As always, if you want to talk more Walking Dead with me you can find me on Twitter @iamgeek32. I’ll see you all later in the week! Many huzzahs!