Tonight’s episode of The Walking Dead is brought to you by the letter “I” for identity. As in who has one, who is able to maintain one, and who has given theirs up.  I would also accept the letter “B” for bleak as after last weeks little jaunt in the Kingdom we are back aboard the train to Everything Sucks and Everyone Is Doomed Town. Granted, this was no where as crippling as the premier but it seems that every where Negan is things are grey and filled with gloom (Fun Fact this a catch phrase passed up by Game of Thrones). Aaaaaand I kind of dig it. Strictly in how compelling it makes the characters and the story not in how it makes my skin feel sad.

While tonight’s episode was the first to take place within Negan’s compound it was more of a backdrop to the excellent character development that was provided. We didn’t get a full exploration of where Negan plays big spoon to Lucille’s little but we did learn that it is pretty large (big enough for a prison wing), there are fresh tomatoes and eggs, there’s enough energy flowing through the place to allow people to watch VHS tapes of Who’s the Boss, there are smokes, and fresh bread. It’s like a regular District 12 but with a much different version of the Hunger Games. So, I guess we learned some things. Most importantly we learned what happened to Daryl after Negan and the Saviors took him prisoner, and the results were not very pretty. 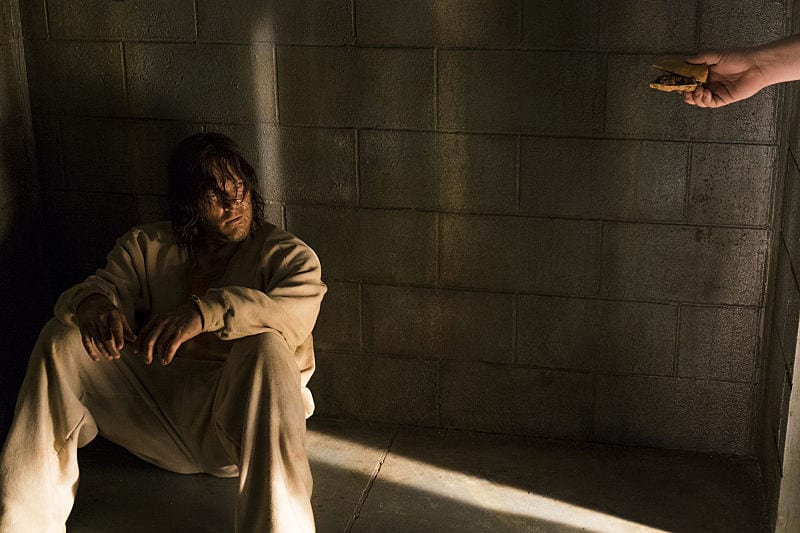 My immediate thought was Daryl’s imprisonment reminded me a lot of what the Governor does to Michonne in the comics. It had that kind of sadistic, soul stripping vibe to it. Leaving him in a dark cell with just a glimmer of light, playing that effin song on repeat over and over, feeding him dog food sandwiches. Everything about this was supposed to strip Daryl bare (quite literally as I heard you sighing interwebs but come on. Even you hardcore Daryl lovers didn’t want that side butt action like that) and make him lose sight of who he is. Which seems to be the M.O. over in Camp Negan. Everyone is Negan which means everyone is no one. What? It sounded more philosophical in my head but I’m going to try and explain it to you.

I’m starting to piece together just who Negan is and I think I might have figured it out some. You know that guy in high school who thought he was the coolest? This was the guy who used a lot of lame jokes that only he laughed at. This was the guy who validated himself by how kind he was to others in his cruelness. This was the type of guy who ate you’re lunch in front of you and was hurt when you didn’t thank him. That’s Negan. Negan doesn’t promote individuality he wants everyone to be like him. “We are Negan”, while being the perverse opposite of “We are Groot”, isn’t just a mantra it’s how Negan wants to live. He’s surrounded himself with people who act and think just like him. The jokes are always funny. His cruelness is actually viewed as fair and kind. When he eats your lunch (or steals your wife)  you ask him if he’s still hungry. Negan has created a community of people who think, act, and live just like him. And what happens to those who don’t fall in line? What happens to people who don’t find the joke funny? What happens to those people when asked “who are you” respond with their name? Well, it seems like there’s a few options. They either get zombie fence duty, a date with Lucille, or maybe even the iron. I guess it all depends on how badly Negan wants to break you because don’t get it twisted he enjoys what he’s doing. Look at Dwight. There is little doubt that Negan absolutely loves torturing him, and it’s made even sweeter because he knows that Dwight won’t do anything about it. He’s completely broken.  With all that being said though, he’s still the most engaging man in the room whenever he’s on screen. Jeffrey Dean Morgan has been captivating in this role, and as much as Negan gets under your skin I can’t help but miss him when he’s not on screen. It’s actually come to the point where I wonder how this show even existed without him. I would argue that The Walking Dead  hasn’t had a character this engaging since Shane.

Now Negan’s cloning or brainwashing can be a process and maybe it takes some people longer to get it. There are people who are willing to cling to their identity and not conform (we saw that with Gordon who tried to escape), and while we can applaud their bravery, it  seems that they’re fighting a battle that can’t be won. That’s where Dwight comes in. I can totally see that the immediate thoughts on Dwight are he’s a bag of d’s, and I understand them. When we first meet him he’s stealing other people’s goods and using them to make himself what seems like the tastiest egg sandwich in the apocalypse. Then right after he serves a dog food sandwich to Daryl. He’s not making a lot of friends but I would argue that Dwight is a super sympathetic character who has spent an extended amount of time being kicked and neutered by Negan. 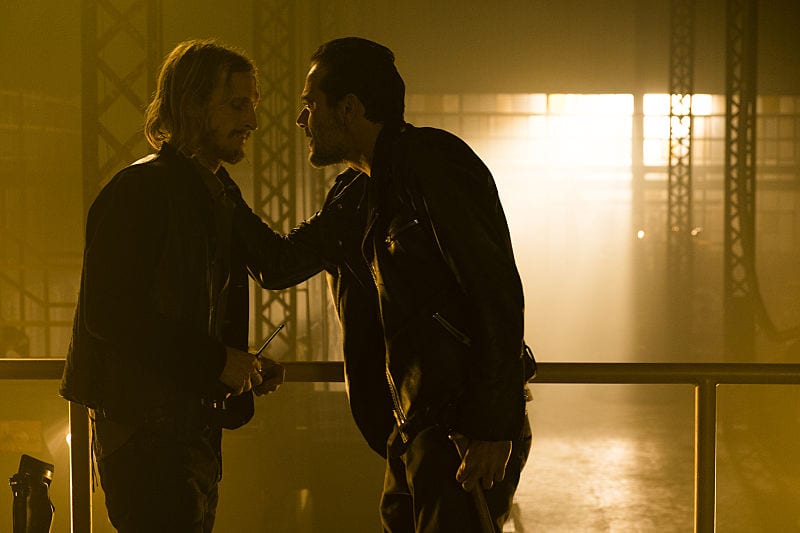 When we first met Dwight last year he was on the run from the Saviors only to betray Daryl and return back to Negan’s compound. At the time it instantly made us dislike him. No one betrays Daryl! That man is a national treasure damn it! Tonight we had some of those gaps filled in and it helps to change the perspective on the character. Dwight was actually trying to be pretty heroic in that situation which turned into something he could never escape because the reach of the Savior’s is just too far. Running away from Negan and the Saviors was done in order to spare his sister in-law from marrying Negan which is completely understandable considering the dude is kind of a monster (and for those of you who read the comics I would expect this story to expand a bit more as the season goes on). Upon returning to the compound Dwight apologizes and offers himself up to Negan which would have been enough to spare his wife and his sister in-law. There is a nobleness here that I think might be overlooked because he’s “mean” to Daryl but Dwight tried to protect the ones he loved and it totally backfired on him. His wife, trying to protect Dwight now, offers to marry Negan instead because her sister died and Negan thinks that just the bees knees and marries her. Then, because he can, Negan puts the iron to Dwight’s face. Think about that for a minute Geeklings. Dwight loses his wife, half his face, and now has to work for the man he probably hates more than anyone to keep his ex-wife alive while also seeing her take failed pregnancy tests. What kind of existence is that?

Like I said before this whole episode was about identity and as the episode unraveled we learned that Dwight has completely lost track of his. He’s too far gone at this point to be who he once was. Everything is a game with Negan and there is no way for Dwight to win. Think about Negan offering up a night with his ex-wife because he’s been working hard. How is their a right answer to that? If Dwight says yes then Negan will think he hasn’t conformed but if he says no he seems ungrateful. So when you see the way he treats Daryl or even killing Gordon I don’t believe it’s coming from a malicious place. Dwight envies both of them because they have been able to maintain their individuality. Gordon only agrees to go back to the compound after Dwight threatens those he cares about and while shooting him in the back could be viewed as cowardice I would argue that Dwight was giving Gordon something he could never have. Escape. As for Daryl, I think Dwight’s treatment of him is jealousy. Despite how awful he’s being treated Daryl has still been able to maintain his individuality. When Negan asks who he is he’s still Daryl which stands as a middle finger to Negan. Although we know Negan tends to get the last laugh whether the joke is funny or not. 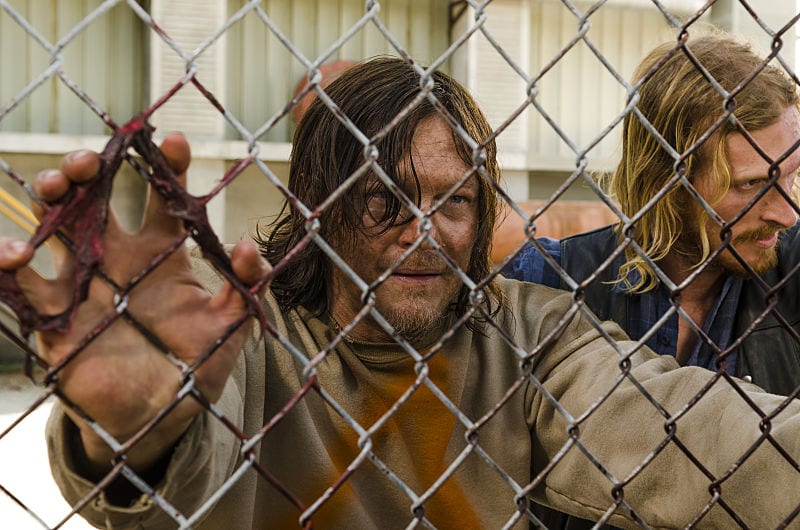 There you have it Geeklings. This weeks episode was very character driven and pretty compelling. Thus far seven season of The Walking Dead is living up to the hype and providing a lot of promise. What did you guys think? Anyone out there still hating Dwight? Have your thoughts of Negan changed? Can Daryl possibly survive his stay on the compound? Sound off in the comments below. As always if you want to talk more Walking Dead with me you can find me on Twitter @iamgeek32.