When season eight of The Walking Dead started we were promised a war, and to that effect, they are not disappointing. Two episodes in and I’m starting to wonder if we’ve seen more bullets fired in these two episodes than the seven prior seasons, and that’s only a slight exaggeration. The war between Rick and Company and the Saviors is massive and appears to be the central storyline for this season, and while I’m happy that the show is delivering on the action and promise of the war, I couldn’t help but feel a bit frustrated with “The Damned”. Don’t get me wrong, I thought the action was shot wonderfully and intense, despite being kind of silly with the Saviors mostly shooting at fences, Aaron and crew not being tactically sound at all, while everyone seemed afraid to make a move. The atmosphere felt important but I couldn’t help but feel we were falling into some classic Walking Dead storytelling problems. 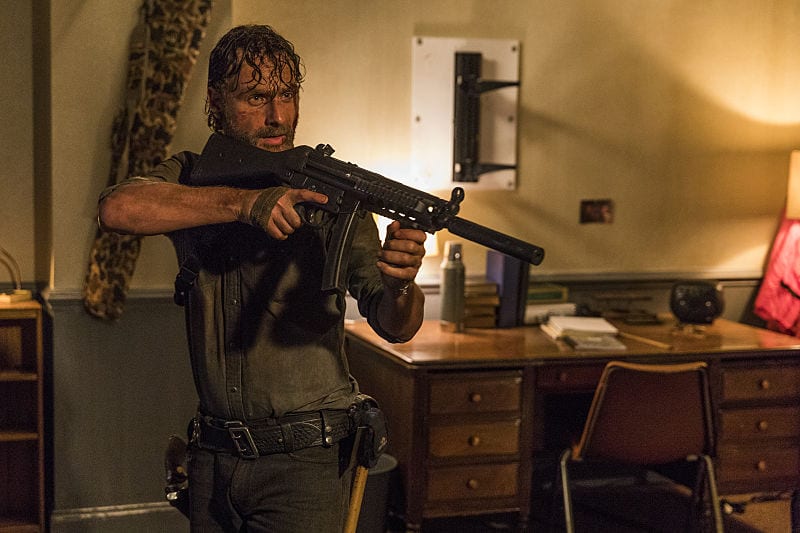 For starters, the pacing. One of my chief complaints with The Walking Dead is their ability to stretch out a story or an event for way to long. This is an issue that is expedited anytime the cast is split up. Think back to season six and the moving of the herd. Did that really need to be four or five episodes? I would argue no and that the spreading out of that single event hurt the narrative, and I’m growing concerned that these strikes could end up becoming the same thing. How many episodes are going to be dedicated to this single strike against the Saviors? Three for sure, following that cliffhanger (I’ll get there), but I would be willing to guess five maybe six. That brings us right to the midseason finale and our war essentially has become a battle and the story hasn’t truly progressed. These are some of the frustrating aspects of the show, and last night didn’t really do much to move the story. There were explosions, deaths, and zombies but the battle itself lacked any true heart.

Let’s look at Jesus and Tara, as I felt their aspect of the battle was the most important. I’m not going to sugar coat this at all, Jesus’s argument was dumb. It was super dumb. It was the type of super dumb that almost got two slightly main characters killed. I fully understand and appreciate his argument though. Is it a victory if you have to sacrifice your humanity has been one of the shows biggest themes, but that was not the time to be having that conversation. Granted, Tara is being fueled by revenge and we can’t really blame her for that, and yeah the guy was covered in pee with his hands up, buuuuuuut couldn’t Tara have killed him and then we have the humanity discussion? Instead, the guy clearly was playing a trick, took Jesus hostage showing his true colors, then Jesus broke out the kung-fun, and still didn’t kill him. Are you kidding me?! Not only did this guy prove Jesus to be wrong, a phrase that makes me feel like I’ve angered God, but would have definitely killed him as well. Jesus instead ties him up because “yay having a soul” and proceeds to take his we shouldn’t kill clause further with a group of outnumbered Saviors. Good for Tara here telling him that Rick will back her play which is The Walking Dead equivalent of saying “just wait till your dad gets home.” This arc seemed to be the backbone for the episode but I couldn’t look past how dumb the argument is. I think in this stage of the game Rick and Company should be past this way of thinking. These types of decisions make Jesus a liability in a war he willingly signed up for if not promoted. 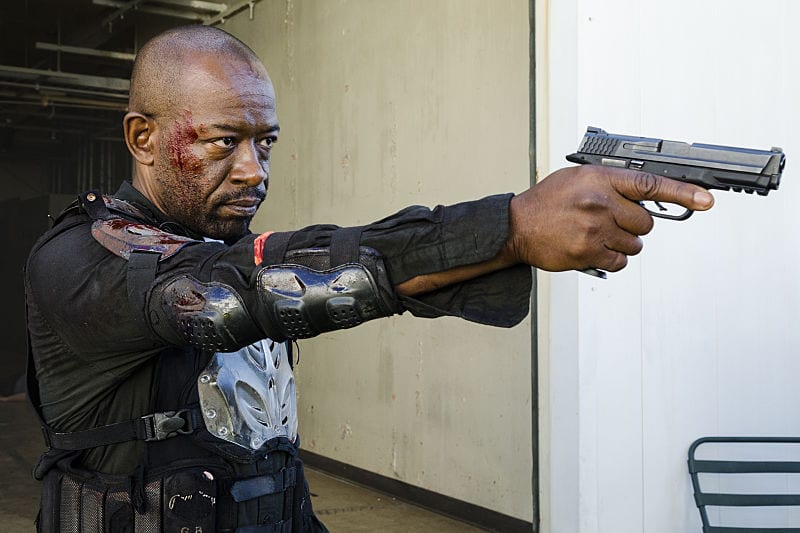 While Tara and Jesus were arguing, Morgan was being saved by divine intervention and transforming into the Terminator apparently. I’ve had a lot of issues with Morgan and haven’t really found him interesting since his clear episode way back when. Again, this is a case where I understood his will not kill clause but it didn’t really seem applicable in the universe these characters lived in. Again, I know this all feeds into the overall theme of humanity and maintaining it in the face of everything, but it doesn’t mean that I didn’t find the character to be eye rollingly annoying with his constant rhetoric. Christ, he chased away Carol people! With that being said though… I thought Terminator Morgan was ridiculous. Not the cool kind of ridiculous the ridiculous kind of ridiculous. How quickly he turned the killing switch and went around shooting people within the compound as if it was nothing while apparently being invincible was silly. Did it look cool? Sure, everyone loves badass moments of action but maybe if it was a character other than Morgan it would have worked. Actually, that’s not true. If Morgan was walking around the compound killing Saviors while muttering to himself and clearly going crazy I would have been all for this. I thought with last years season finale we teased the all clear Morgan but it seems now we have kill friendly Morgan who also is invincible. He might be a better shot than Daryl on a motorcycle too.

Elsewhere you have Ezekiel leading a party of actual humans, and a tiger, to war and acting like this is the best live action role play ever. I know that Carol is warming up to the King and Jerry is a bag of awesome, use that ax boy (!), but Ezekiel is going to get people killed. This is not a game and treating it as such shows his inability to be a true leader on the show. These people follow him because they believe in the fantasy. What starts happening when the best live action role play turns deadly? How many people in the Kingdom will be willing to follow a man who has kept them living in a fantasy? I know all these people choose the life of the Kingdom because it’s an escape but reality is knocking on the door in the form of a barbed wire baseball bat. It might be time to cut the theatrics and the Henry V type speeches and actually showing your people that there are real consequences. Ezekiel’s behavior intrigues me and can only lead to some sort of backlash. Good thing Carol is there to hopefully reign this in. 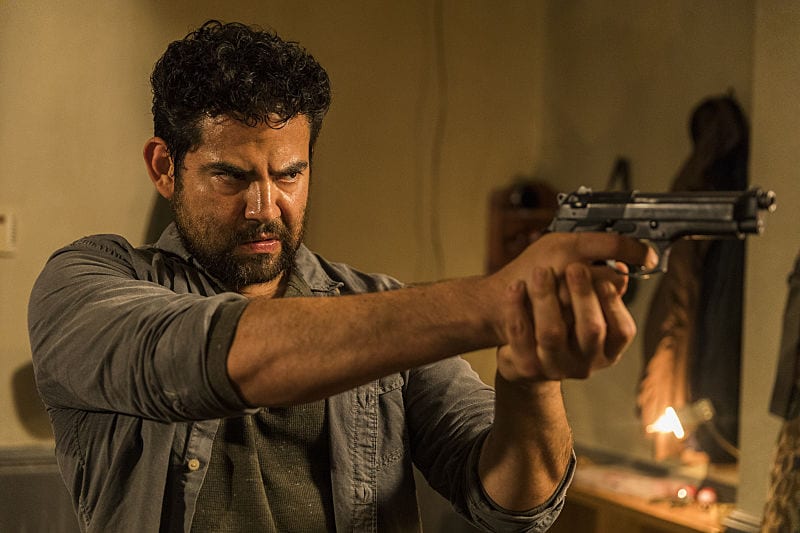 Then there’s Rick… his part of the episode was actually really good. For the most part. I loved the way the scenes were shot, the lighting was tremendous, there was a John Carpenter type fell of intensity, and watching Rick and Daryl work together is fantastic. Here are two characters that are truly on the same page and trust each other without question. All of that was great, and I might be in the minority about this, but that twist… yeah? Don’t get me wrong I’m a sucker for narratives that bring back old characters and have it be impactful but I felt that the return of Morales as one of the Saviors was kind of flat. Mostly because I felt he was a throwaway character of season one who left before the CDC and now has returned seven seasons later as part of the Saviors pretty much out of no where. It’s not like characters ever said: “you know, I wonder what happened to Morales”. I mean, it’s a cool thing to bring him back but I’m not going to treat this as some momentous return. It seems more like a crafty easter egg than anything truly important. Morales getting the drop on Rick made for a surprising moment but I really had a tough time remembering just who the hell he was which affected the “holy crap” moment. That kind of took away from this being impactful. It’s intriguing, I’ll give it that.

There you have it Geeklings, this turned out to be a bit harsher than I thought it would be. It may not seem this way but I did enjoy the episode but it mostly left me feeling frustrated and concerned. I really hope I’m overreacting here but given the track record of previous seasons, I’m not sure if I am. What do you guys think? How did you like “The Damned”? Are you concerned with the pacing of the season? Were you shocked and excited for the return of Morales? At this point in the season who is winning the war? Sound off in the comments below. As always, if you’d like to talk mor Walking Dead you can find me on Twitter @iamgeek32. Curious to what you guys think.