With all the excitement of Stranger Things it would have been easy to forget that there’s a brand new episode of The Walking Dead tonight. Good thing I’m here to remind you of the awesome that awaits you. But what should we expect? Good question.

I was very pleased that last weeks premier jumped right into the action. Rick had promised us a war between the survivors and the Saviors and he delivered. Bringing the fight to Negan’s doorstep was an aggressive first move that seems to have had the desired results. Negan’s Compound is now surrounded by walkers, it’s hard to make a move when you can’t step outside, and Negan himself finds himself on the outside stranded with Father Gabriel which is an interesting scenario. I really don’t take Negan as the confessing type, although I could see him making some highly enjoyable jokes out of the possibility, but he is persuasive and knows how to get what he wants out of people. Father Gabriel hasn’t really been considered the strongest memeber of Rick’s party and I wonder if being trapped in a room with Negan is the best thing that could possibly happen to him. I’m not entirely sure how much information he could give up on Rick’s next move nor am I entirely sure what Negan could do about it considering his current situation, but I’m sure that he’ll try and make the best out of his current perdicament.

Elsewhere Rick looked to be attacking another one of Negan’s outposts but we haven’t seen any of the real action just yet. There was the smoke grenande and then it looked like a crying Rick post battle. Or at the very least a shell shocked Rick. I don’t know about you guys but it gave me the distinct impression that maybe this latest battle resulted in some loss? It certainly seems possible. This is a war after all. 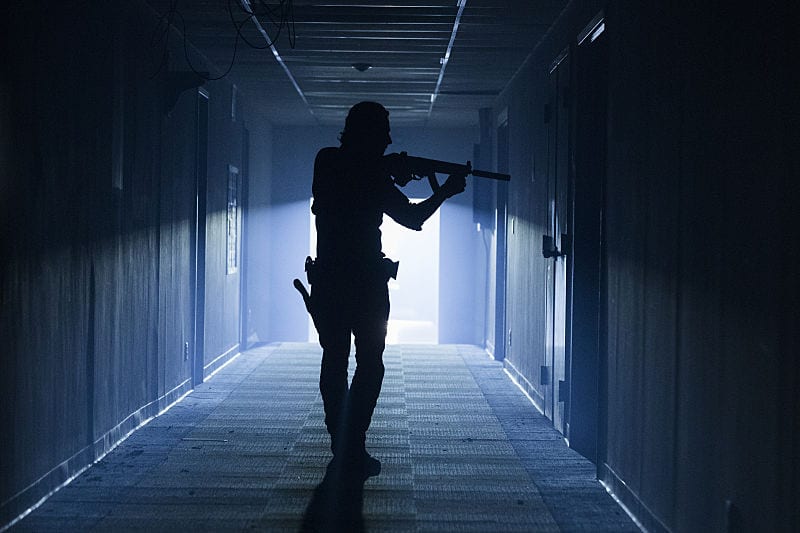 Then we’ve got Old Man Rick… what is going on there he said knowing full well what’s going on there. I read a bunch of your theories and some of you believe that Rick is dreaming while others think it’s a possible flashforward, I even saw some of you say that it’s an alternate timeline. I’m loving the guess work here so keep it coming peeps.

There you have it Geeklings, what are you expecting out of tonights all new The Walking Dead? How do you think Negan and Father Gabriel are going to get along? What happend with the lastest outpost attack? Who exactly is Old Man Rick and what are they celebrating? Sound off in the comments below. As always if you’d like to talk more Walking Dead you can find me on Twitter @iamgeek32. Happy watching everyone and I’ll see you all here tomorrow with a brand new review.