Last week on The Walking Dead Rick and Company lead a number of strategic strikes against Negan and the Saviors to varied results. It seemed that King Ezekiel and Carol’s strike was pretty successful, they do have a tiger after all, but I couldn’t help but feel that treating the situation like a game of live action role play was a massive mistake. That’s how people get dead. Forever dead. I think Ezekiel, as a leader, owes it to his people to treat this situation with the seriousness it deserves. The flip side of that though is Carol seems to be enjoying his behavior and that worries me too. Carol is smarter than this and at some point I fully expect her to be the one who reigns in the King.

On the other side, Tara and Jesus picked the absolute worst time to argue about whether to kill Saviors or not and it resulted in a number of hostages and Terminator Morgan. Jesus makes his case for the lives of those who have surrendered and Tara more or less says “Rick is going to kill them anyway”. Yay standstill! I said during last week’s review that I felt Jesus’s argument was dumb considering the time and place and what transpired. Once you make a case for someone who has surrendered and they try and kill you afterward… yeah, might be time to stop holding punches. There is a war to win and it doesn’t seem that mercy and hugs are going to be what wins it. All this and Morgan apparently can’t die or miss a shot. Who knew?!

Somewhere in between all this Eric got shot in the worst gunfight ever. Seriously. The Saviors shot at metal shields, Aaron’s group didn’t move forward, neither side seemed to want to win the fight, and somehow Eric still got shot.

Then there’s Rick. Rick, Rick, Rick… Daryl and his pursuit for a weapons stache resulted in some ass kickery, a fatherless baby (?), possible betrayal from super spy Dwight, and the return of a character you either didn’t remember or didn’t care was missing. The return of Morales is a neat easter egg and a fun call back to season one but I’m already afraid that we’re going to get a full episode detailing just where he’s been for the last six seasons. Not to be cold or anything, but I don’t really care and would care even less if his backstory took away from this season’s overall story arc. I feel Morales’s years away can be done with an intro montage that leads into the intro credits and that’s all we’d need. He wasn’t a significant character in season one and just because he’s holding a gun to Rick it doesn’t make him a significant character now. Cold? Maybe, but I just don’t see the big deal here especially when he could possibly be dead by the end of the episode anyway. Rick doesn’t care much for nostalgia acts. Especially when they’re pointing guns at his face. 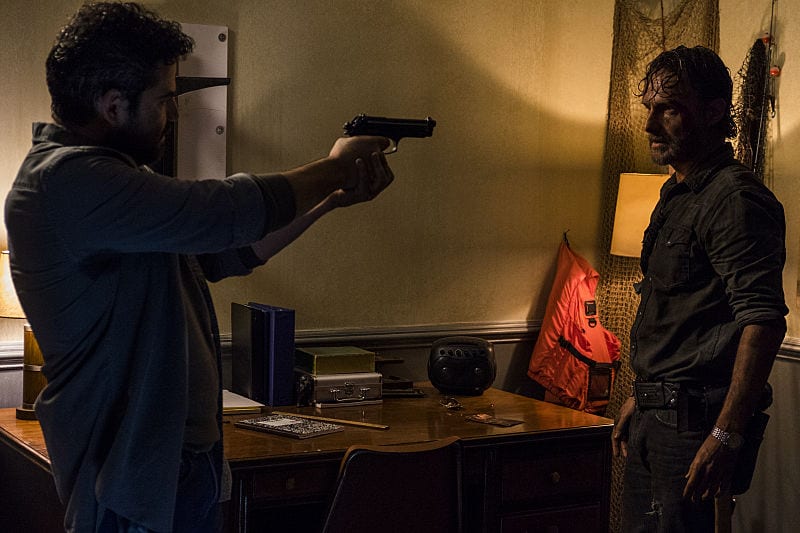 I do like the dynamic introduced with Morales being one of the Saviors, if only it shows that not every survivor sees things the way Rick does or believes in his methods. When we last saw Morales he was heading off for a better life for him and his family. Whose to say that he didn’t find one with Negan and the Saviors? Chances are his family is dead which lead him to the Saviors but hey, I like to think of Negan in a grey area. I’ve said it here before if he had been the main character of season one we wouldn’t view him as a villain right now. That job would be held by Rick. Things to think about.

Speaking of Negan, I feel this show suffers when he doesn’t appear. Jeffery Dean Morgan and the charisma and energy he brings to the character add life to this apocalypse, and when he’s omitted from an episode it’s glaring. Leaving him on the sidelines just hurts the product. I get that too much of a great thing blah, blah, blah, but you know it as well as I do that Negan makes this show better. Plus, isn’t anyone else curious to what is going on in that trailer with him and Father Gabriel? I know I am because Negan with a priest has the promise of hilarity and intense action.

There you have it Geeklings. I’m hoping that this episode moves the plot forward as I’m slightly concerned that these attacks could be spread out over the course of the first half of the season. It seems that they take place all in one day and I would hate to see the show resort to such slow storytelling this early in the season. Outside of that what are you guys looking the most forward to? Are you happy that Morales has returneIs Eric done for? Sound off in the comments below. As always if you’d like to talk more Walking Dead you can find me on Twitter @iamgeek32. Happy viewing and I’ll see everyone Monday evening with my review!

Images and Trailr from AMC