The Walking Dead: Our World, the new location-based augmented reality mobile game from Next Games and AMC, debuted on mobile platforms one week ago. The game puts the player directly into the action of fighting walkers in the streets of your own neighborhood, in your house, at work or pretty much anywhere you go in real life. By teaming up with your favorite characters from the AMC hit series including Michonne, Daryl Dixon, and Rick Grimes, the game allows you to virtually enter into the zombie apocalypse world. Check out the awesome game trailer below:

In its opening weekend alone, The Walking Dead: Our World became an international sensation. The game skyrocketed its way into the top 10 ranks in the games category within over 40 markets including the United States, Germany, United Kingdom, France and Spain. The game’s impressive stats continue to flourish as more and more players enter into the virtual apocalypse.

Teemu Huuhtanen, Chief Executive Officer of Next Games gave a rundown of some of the impressive stats that the game has achieved so far. He said:

[row]“We are very happy with the game’s reception and the excellent download chart positions we achieved on the opening week. Like all Next Games’ titles, this game, crafted with love and care, is being developed as a long-term service. A week after global release, we are in the very beginning of this exciting journey. On the first week, an average player played 7 sessions per day and spent 37 minutes in the game. The players have collectively completed 100 million missions and walked 9 million kilometers (5.5 million miles), which is 220 times around the Earth. The most active cities are New York, Paris, and Tokyo. We are also seeing a promising trend in early monetization with the first week’s average revenue per daily active user at 0.35 euros, which is a very good result at launch.”[/row]

Those are some super impressive numbers. Check out the below infographic which is full of The Walking Dead: Our World opening weekend fun facts: 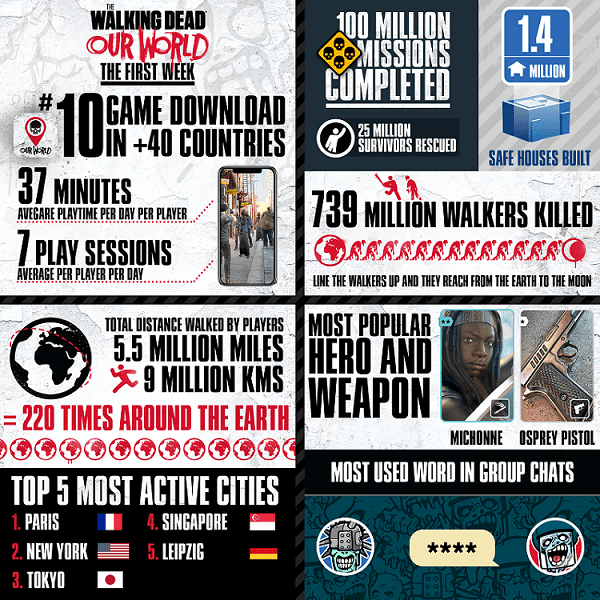 Have you downloaded The Walking Dead: Our World yet? Join in the fight against walker herds in your own neighborhood by visiting www.getourworld.com to download the game and www.thewalkingdeadourworld.com for more information.