As The Walking Dead nears the end of its series, it killed off one of its main villains. However, fans found the death scene to be over-the-top and unbelievable. In addition, Carol (Melissa McBride) and Daryl (Norman Reedus) were paired together for a new mission but didn’t have much interaction. Pamela (Laila Robins) gave Yumiko (Eleanor Matsuura) an unwanted case that she had to take on.

Ezekiel (Khary Payton) visits Carol at the bakery in the beginning of the episode. After he mysteriously vanished, she is suspicious. Her lack of trust is merchants when Daryl is placed in harms way . The friends manage to survive but realize all their other companions are captured. Desperate and alone, who do ‘Caryl’ turn to? 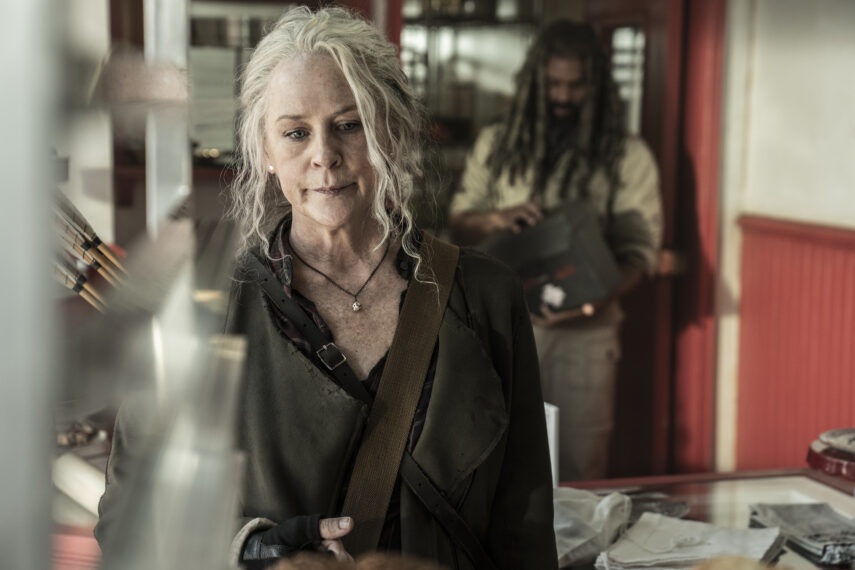 Hornsby (Josh Hamilton) is the one! They find him drenched in blood in his cell, murmuring about how there’s “always a way out.” (Side note: Hamilton did the whole “oh, he snapped” thing well enough that for a few minutes, I honestly thought Hornsby had checked out.) Carol and Daryl snap him out of it and break him out of his cell, since he promises he can lead them to their friends. But they’re unable to get his ankle monitor off, so they attract unwanted attention from some Commonwealth guards. Pinned down amidst a storm of gunfire, Daryl stays back to allow Carol and Lance a way out.

He leads her into a tunnel in order to lose the Commonwealth guards who are following them. A scuffle breaks out and three things happen: 1. She saves him from a walker that almost kills him, 2. She almost gets killed by some walkers that show up behind her, and 3. she glares at Hornsby who was holding the flashlight the entire time .

When they leave the tunnel, Commonwealth guards are waiting for them. Daryl is able to take out all of the soldiers and save Carol and Lance. However, later on Lance accidentally tells Carol and Daryl too much information- namely that their friends are currently on a train.

They don’t need to know anything else, and even though Lance tries to argue, they’re done with listening to him. They tell him that he won’t be killed but also not coming with them outside the walls– in other words, he’ll have to survive on his own. Hornsby starts freaking out, saying how living life outside the Commonwealth is too much for him handle.

At first it looks like he’s leaving, but when he snatches a gun and points it at them, Carol shoots him in the throat. He dies instantly, and Carol and Daryl drive away quickly. It’s hard to believe a guy as methodical and strategic as Hornsby would’ve gone out like that so foolishly, but it seems that his death was inevitable. Yumiko, from the Commonwealth, continues Michonne’s storyline from the comics. Pamela tells Yumiko she has to prosecute Eugene for his crimes, but Yumiko doesn’t agree with that plan. If Yumiko doesn’t go through with it, Pamela threatens everyone important to her.

Upon discovering that Hornsby has left and her son’s walker has been put down, Pamela searches for him. She finds his coins in dead-Sebastian’s brains (nice touch) and puts them back in his bag. Yumiko goes to see her brother at the hospital where he tells her she should just do what Pamela wants. However, Connie (Lauren Ridloff) unexpectedly appears.

Connie tells Yumiko that she got away from the man who tried to kidnap her and stabbed him in the leg. Then, she snuck into the hospital to try and get some information about him. They make a plan for Yumiko to follow him once he’s released, but it quickly goes bad when guy realizes what she’s doing.

In the end, Yumiko does attend Pamela’s big speech where she was going to announce her prosecution of Eugene Porter. Instead of doing that, though, Yumiko draws attention to her brother in the crowd—thus highlighting his importance to the Commonwealth and saving him from Pamela’s wrath—and then announces her defense of Eugene Porter. As she leaves, she throws Pamela’s speech on the ground.

On the train, we see several of the protagonists being injected with a sedative in their necks. There is no indication of where they are going or why, but it does not seem to be for a good purpose.

Home » Television » The Walking Dead: Kills Off a Main Character, Divides the Group as it Heads to Finale