Remember when Enid kept sneaking out of Alexandria and we all began to think she might be a mole for another group of survivors, like the wolves? Or that she might be taking on Sophia’s story line?

Anyways, there are lot’s of theories revolving around Enid.

Katelyn Nacon, who plays Enid, spoke told Vanity Fair about her experiences about being accused of being a spy. She says that “it was just horrible, because at all the Walker Stalker Cons, everybody was just like, “Are you a wolf?” And you can’t deny it, and you can’t accept it, so you’re just like, “I don’t know,” even though in your head, you’re just like, “No!” You just have to be really loose about it all.”

So according to Katelyn, Enid is a faithful member of Alexandria, but she isn’t in the clear yet. One fan brought up an interesting point.

Every person who has had a one on one scene with Enid has died… Is Carl or Maggie next? 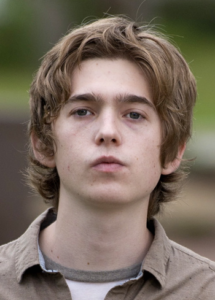 When Rick’s group meet Enid, she is dating Ron. Tensions form between Ron and Carl, making them instant enemies. In “Just Survive Somehow” when Enid runs away during a Wolf invasion (which didn’t help the rumors that she was a Wolf) Carl asks Ron to help him find their friend.

“My girlfriend,” Ron says, correcting him.

Then in “No way out” when Ron goes to kill Rick, he is impaled by Michonne’s katana, ending his life. 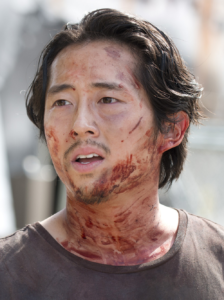 Enid is the one to find Glenn under a dumpster and he basically forces her to come back to Alexandria. She becomes more cooperative when Glenn tells her that Maggie’s pregnant. She begins to see him as a father figure not only to his unborn child, but to her.

We all know Glenn’s fate in “The Day Will Come When You Won’t Be” RIP Glenn. 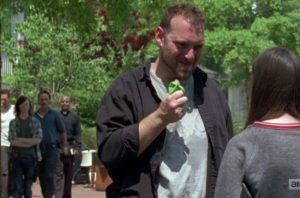 Enid was using green balloons to mark Glenn’s grave, but in “Service” when the saviors come a day early for their supplies, a savior, takes the balloons. He gets really creepy when he demands that she say “please” to get them back.

He stays as creepy as ever when he tries to break Negan’s no rape rule and gets a knife through the neck when Negan catches him attempting to rape Sasha. (“Something They Need”) 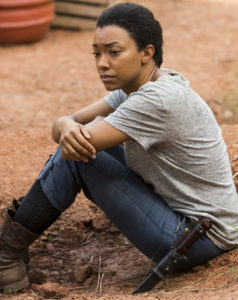 Enid moves to Hilltop and has been living with Maggie and Sasha.  In “The Other Side,” Enid finds out that Sasha is going with Rosita to kill Negan. Sasha goes to Enid and tells her to protect Maggie because she’s the “future of this place and so are you.” Enid tells her to get moving because in 10 minutes she’s going to tell Maggie everything.

Sasha gets captured by Negan and decides that instead of being used as a weapon against the people she loves, she’ll turn herself into one to try to finish out her mission. RIP Sasha. 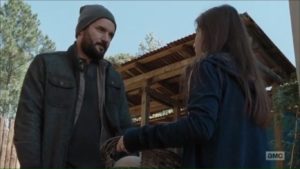 Also in “The Other Side,” the saviors make a surprise visit prompting Enid to cover for Maggie and Daryl. She goes over to a savior with a basket of vegetables and asks if he wants any.

He throws the basket down and wants her knife. This savior was bitten by a zombified Sasha in “The First Day of the Rest of Your Life” 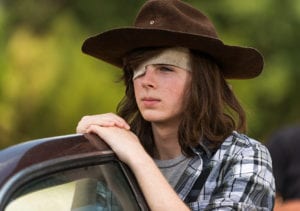 After Ron’s death, Enid begins to show feelings for Carl. The two go on a little adventure in “Go Getters” and they share a kiss confirming their relationship status. 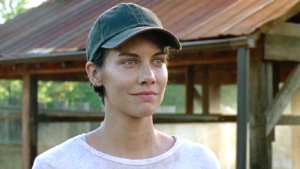 Enid sees Maggie as a mother figure and has taken it upon herself to be there for her no matter what. Enid leaves Alexandria for Hilltop to take care of Maggie, especially after Glenn’s death.

Maggie is still alive as well.

So what do you guys think? Could Enid have ties to other survival groups, or do you think she is a toxic character. Another possibility is that this is all just a coincidence and poor Enid just has really bad luck. Let us know what you think!

Can Enid be trusted?