I’ve often asked the question, “if a bad story has an amazing ending, does that make it a good story?” I think we’ve all experienced a subpar story that has this incredible ending and we start questioning why we didn’t like the first half of the story in the first place. But that doesn’t necessarily make the story a good one. An awesome ending doesn’t omit the flaws in the story structure it just makes the story experience frustrating. “Why couldn’t the whole story be like this?!” That’s kind of how I felt last night when The Walking Dead’s midseason finale finished up.”Where has this been?” Last night’s episode, “How It’s Gotta Be”, was everything that makes The Walking Dead excellent, but it also helps to highlight the frustration of the first half of this season. A season that has struggled with story structure and, before last night, has only provided one really good episode.

Yet, when the credits rolled I couldn’t help but feel like the bottom had dropped out on me. Looking beyond the zombies, the apocalypse, and bats wrapped in barbed wire (“don’t you touch her!”), The Walking Dead has always been a show about family and one man’s quest to keep his family safe. Everything over the last eight seasons from killing a BFF or creating a murder church to biting someone’s throat out has been done to either protect or preserve the family. Everything we know about Rick Grimes can be defined in the future he wants to provide Carl. That’s what this is all about. That’s how Rick has rationalized everything he’s done thus far. And now… now, that’s changing. I solely believe that the only reason Rick hasn’t turned into a sociopath is because of Carl and Judith. When Laurie died he went crazy answering ghost phones filled with the voices of characters past but he was able to ground himself back into reality because of his surviving family members. But what happens now? 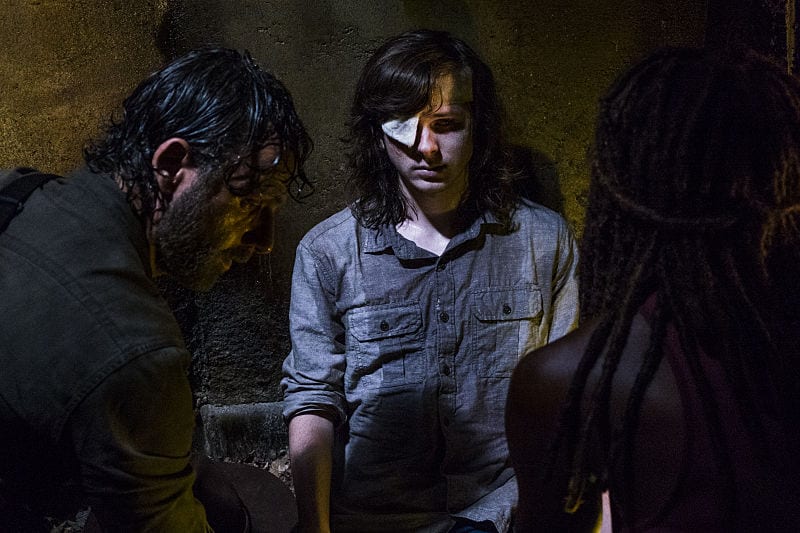 Carl Grimes is going to die. He has been bitten by a walker and it’s only a matter of time before he turns. Everything Rick has been fighting for is about to evaporate. Somewhere along the line of fighting for someone, Rick lost track of who that person was turning into. We’ve seen Carl grow a great deal on this show. Starting off as the boy who wouldn’t stay on the porch to the boy who had to kill his own mother. We’ve seen Carl go into his murder phase and more recently we’ve seen Carl break free of Rick’s shadow becoming his own man. A man who despite seeing the worst this world has to offer still believes that there is good in people. That people are worth saving. Hell, it’s what gets him bitten. Rick pushes aside another humans wants because he can’t be bothered, and while Carl’s actions can be frustrating at times (just stay on the porch man!), he acts against Rick’s wishes because he feels this man needs a chance. This man should be allowed the same opportunities that Carl has in Alexandria. That ultimately gets him killed. It seems fairly clear that Carl got bit in the woods while playing the good Samaritan which makes his impending death all the more tragic. Rick has been fighting for a better future for his son while his son was out there trying to create one… and that gets him killed.

The loss of Carl couldn’t come at a worse time for Rick. Negan and the Saviors are out of the Sanctuary and flexing their muscle. I will say this, The Walking Dead works so much better when Negan and the Saviors are winning. The show becomes more scary and tense, and it gives us something to root for. We like seeing Rick Grimes overcome the odds and maybe parts of this season haven’t worked because Rick has been the aggressor. After last night it is clear that Negan and the Saviors are steps ahead of all the communities. One has to wonder if Rick and company actually stand a chance here? Alexandria is gone, the Kingdom is evacuated, and all that remains is the Hilltop. Negan, in one fell swoop, has done what Rick has been trying to do all season. He’s taken control.

Now, hiding in the sewers, we have to wonder what Rick is going to emerge from this. Carl has been the anchor to Rick’s madness. He’s been the drive. What happens when Carl eventually passes? Are we going to see a scenario where Rick has to put down his son like Carl did his mother so many seasons ago? Will the Rick Grimes who emerges from that be filled with rage, will he start looking for the nearest phone, or will something new emerge? A father and a husband who has seemingly lost everything to this apocalypse and has preached for the future… will he still embrace this idea or turn his back on it? 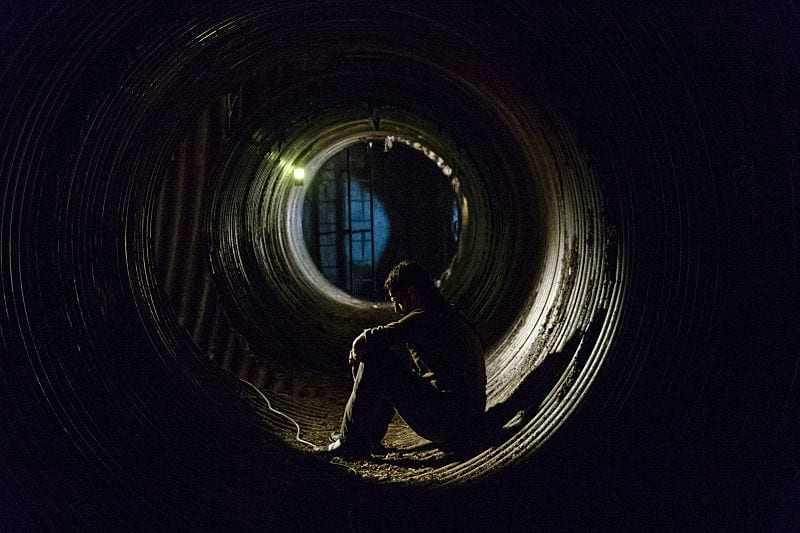 I can’t see this war ending in a truce. There’s no way that Rick can approach Negan and say “hey, I’m sorry let’s be cool”. No, no, no that won’t work. While I do think Negan will sympathize with Rick over the loss of Carl, don’t forget that Negan loves the boy in his own twisted way too, it won’t be enough to stop this war. More blood will have to be shed before that happens. But as Carl told his father in the flashback, not everyone has to die. This world needs to be better than that…they need to be better than that. Hopefully, that’s the legacy that Carl leaves behind for his father to follow. Hopefully, Rick listens.

There you have it Geeklings, the first half of season eight is over and it ended with a kick to the gut. We’re about to lose one of our original characters and the Saviors are fully in control. How is everyone holding up? Were you shocked to see that Carl was bitten? How do you think Rick will respond? Has Negan already won this war? Sound off in the comments below or you can find me on Twitter @iamgeek32 if you’d like to talk more Walking Dead. It’s a somber note to hang on as we wait for February to approach, but hopefully, it leads to a better second half of the season and a better Rick Grimes.