When Negan arrived on the scene of The Walking Dead he made an instant impact, and not just with the heads of Abraham and Glenn… sorry. The arrival of Negan represented a shift in the narrative, Rick Grimes was no longer the rooster in charge of the henhouse. Here was a man in Negan who used colorful language, oozed personality, was vicious, spoke seductively to a bat wrapped in barbed wire, and made it so damn hard to dislike him. Negan was Rick with a personality, and that’s not to say that Rick doesn’t have a personality but when compared to the head of the Saviors, Rick comes across as a little bland. A man so focused on surviving that he doesn’t enjoy the life he’s fighting for. That’s the exact opposite with Negan. Here was a man who was leading his people to better lives but was willing to enjoy himself. To reap the rewards that he sowed. 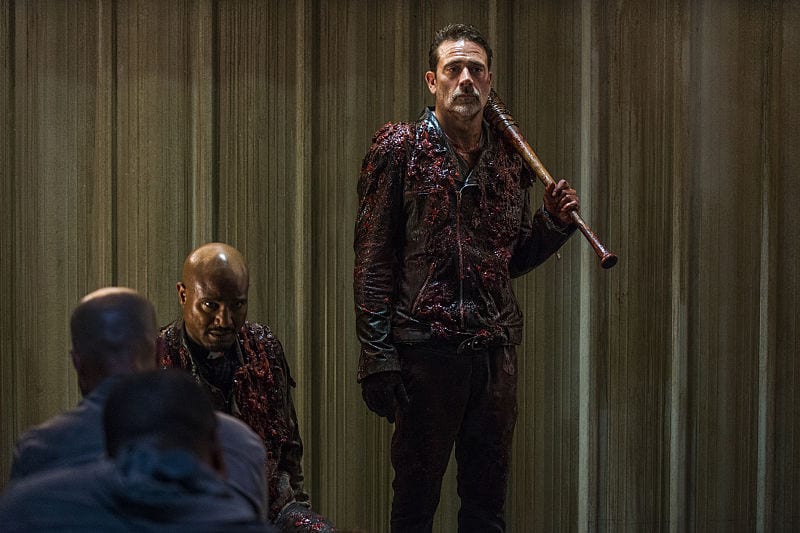 It was easy to look at Negan and Rick and see how drastically different they were but behind all that bravado and colorful language are two men who are more similar than they would like to admit. After Sunday’s latest episode, “The Big Scary U”, we learned a bit more about Negan. For starters, it seems that he was a school teacher before the zombie apocalypse hit (must have been some class). It also seems that he was a crappy husband who cheated on his wife and watched as sickness took her from him. That long look at Lucille has me thinking that’s where the bat name comes from. Here was a man who took the apocalypse by the horns and used it as a way to atone for past discretions and through that atonement he sees the value of people. It seems pretty clear that before the apocalypse Negan was a selfish man and it’s now, with the world over, that Negan is using his gifts to think of others. To be a leader and see that there is no world without one another. People are the resource. People are what this war is being fought over.

Rick and Daryl got into a little bit of a curfuffle this week, that echoed the season two fight between Shane and Rick minus the hate and baby daddy issues, over a very specific issue. People. Daryl was going to use some dynamite to blow a hole in the Savior’s compound allowing the walkers entrance in the hopes that it would end the war. A great plan until you realize that there are innocent people living in that compound. People who don’t deserve to be eaten by zombies because a couple of communities think their leader is a jerkface. Think back to the whole Jesus argument, which I still think is lame or poorly timed, this war is being fought so people can live together after it’s over. Killing people for the sake of killing them will not bridge any gaps and most likely won’t shorten the war any. Rick understands this and takes a stand. While he’s acting in the same vein as Jesus, his timing is a bit better which makes his argument a bit more sound. There are no Saviors firing weapons at Rick and Daryl at the moment, they’re not fighting anyone besides each other, which allows Rick to act clearly and with thought. 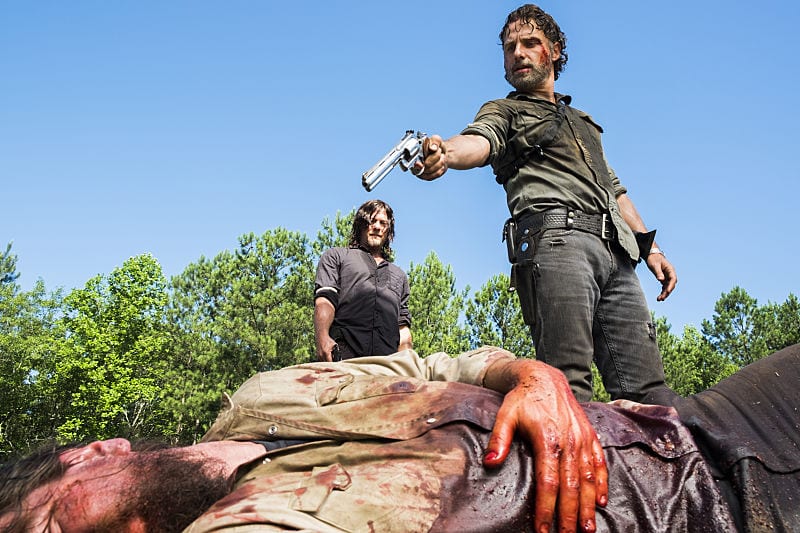 Rick understands that if they blow a hole in the compound they’ll lose people they otherwise might have gained. People who have been sitting back quietly as the war rages around them, but bringing a group of walkers into their home forces them to take action. How does that end after the walkers are taken care of? Wouldn’t these people want to fight the people who tried to kill them? How can you possibly end a war if you do something like that? On top of that, these people are innocent. These are the people Rick wants to use to build the future he’s constantly talking about. You can’t do that if Daryl ends up making them zombie chow. The fight with Daryl is the fight over people. People are the resource.

When you think about it Rick and Negan are two sides of the same coin. They both have the same motives and goals. Building a world for the future. Now granted, they choose to lead a bit differently. Negan is a bit over the top and more colorful where Rick is a bit more strategic and matter of fact. Yet, it’s not all that different. Rick has been known to kill the right people for the right cause, and sometimes just cause he wants to. Rick has been known to impose his way of living on to others. Just look at how he got control of Alexandria in the first place. Here are two men preaching the same things through different methods. I’ve said it a number of times before, and it bears repeating now, if we’d been following Negan since season one would we view Rick as the villain? I think the answer is yes.

Is it possible for the two to sit face to face and talk out the best way to govern the new world? No, probably not. That would be a bit of a letdown. Someone needs to win this war. Rick and Negan’s egos are too big to compromise, but if they just took a moment and looked around they’d notice they aren’t so different after all. Maybe their inability to see this is the big problem here… maybe. Or maybe whatever is in that helicopter is a larger threat and the two will need to band together. Hey, it’s possible.

Home » Fandom » The Walking Dead- How Different Are Negan and Rick?