Maggie has returned to the world of The Walking Dead, and fans have revisited the death of her husband, Glenn, at the hands of Negan. We’ve seen the confrontations between Maggie (Lauren Cohan) and Negan (Jeffrey Dean Morgan). The pair has had, in many ways, to become allies in order to survive. To make matters even more curious, the pair will star in their own spinoff, Isle of the Dead, when The Walking Dead series ends later this year.

There’s no doubt that Maggie blames Negan for Glenn’s death. After all, Negan murdered Glenn by himself. There are, however, other people to blame for the loss of Glenn. This is Daryl’s fault.

Fans often use words like “powerful,” “fearless,” and “loyal” to describe Daryl Dixon, who is played by Norman Reedus. He was an unassailable figure when he first met the group, mocking their naïveté and inexperience while hiding behind a mask of animosity and bitterness to keep people at bay. 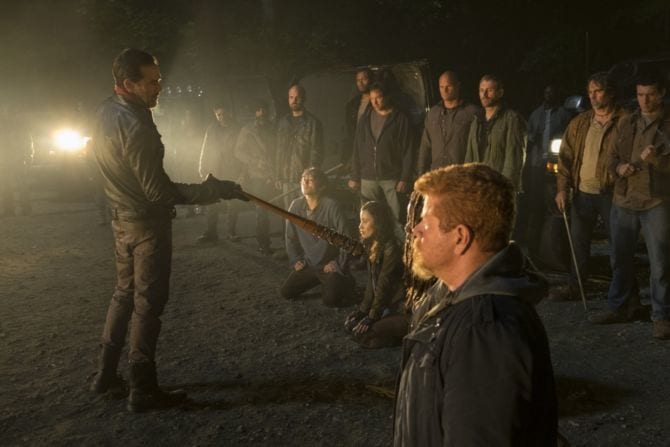 As time passed, however, Daryl formed relationships with the people around him, and we saw his layers peel away to expose an almost vulnerable yet still incredibly powerful character. It appeared that Daryl regarded feeling as a sign of weakness, but as the strangers from the start became his family, he understood that caring about other people could be a sign of strength.

In the season 7 premiere of The Walking Dead, Daryl’s vulnerability transforms him for good as he can no longer tolerate Negan’s taunting and hits Negan after he teases Rosita. In that moment, Daryl didn’t think – actually, no one knew what would happen – but what did happen was it angered Negan and caused him to kill both Glenn and Abraham.

Daryl understood that he needed to defend his family and speak up, but it appears his silence may have saved Glenn.

Entertainment Weekly did an interview with Norman Reedus about what that life changing scene means for Daryl and how it resulted in Glenn’s death.

EW: After watching Daryl’s role in what happened to Glenn in the premiere, I’m really worried for that dude’s psyche going forward. Knowing him, he’s gonna blame himself for what went down, right?

Norman Reedus: He goes into a very dark place. He completely takes the weight of that and just carries that with him. He never forgives himself and he takes full responsibility. Although the thing is, Daryl didn’t say “Oh if I do this, they’ll kill Glenn.” Nobody knows what’s going to happen with that guy with the bat. Nobody knows anything. But what he was doing was protecting Rosita. Negan had that bloody bat, waving it in her face, yelling at her, and it’s right in front of my face too. We were right next to each other. And he was picking on Rosita and Daryl stood up for her and he stood up for Abraham. The outcome of that, nobody knew that was going to happen.

In the moments that follow his strike at Negan, you see Daryl lose what strength he was clinging to as he’s pulled down to the ground before being taunted himself and then thrown in the back of a van like nothing more than discarded trash. Negan is relentless, in a bad way, and stops at nothing to make the group kneeling at his feet feel worthless; he strips away everything about them that made them who they were – no one will ever be the same.

The hardest part of this for Daryl’s character is how his transformation into being a man who allowed emotion and compassion into his heart is seemingly what got him to where he is now, like in some twisted way he’s being punished for caring about these people. Even more heartbreaking than that is that he thinks he deserves it. Guilt is written all over his face as he’s seen before being tossed into the van and it’s evident in the preview for episode 3 airing this Sunday; he’s a shell of a person now.

Norman: So he was kind of apologizing for it. But the truth is that whole group on that show would have done anything to protect any of us, and that guy’s crazy with the bat. The weight of Glenn’s death is going to weigh on Daryl heavily, I know it does. He gives up, he loses the fight, he’s keeping to himself, whatever’s happening to him, he thinks he deserves it. He’s going to let it happen, which is crushing. To take somebody wild like that — a wild, pure, honest fighter like that — and just strip him of his desire to fight back or fight for anything, it’s crushing.

Norman does contribute somewhat of a ray of light in a positive scenario at the conclusion of his interview with EW, speaking about heroes and how they grow into bigger heroes.

While the fan reaction to Daryl’s departure has been split, this interview as well as remarks since the premiere only confirm that Daryl didn’t intend to make things worse by striking Negan; in fact, he was most likely not thinking very much at all.

Season 7 appears to be a power struggle as to who is capable – or rather violent enough – to ensure their vengeance is fulfilled in the moment his mind and heart screamed out for retribution.

At this period of time, Daryl’s traits are associated with a man who is battling inner conflict and self-doubt. His fortitude, even while tested – which we hope will once again be robust – has always been greater than he was even aware of, and we look forward to seeing it reign supreme once more.

In addition, the relationship between Negan and Daryl has evolved in the last three seasons. They are not considered friends, yet they are necessary evils to one another. They both have something the other requires. Negan needs groups so that he is not alone in the world.

Daryl craves Negan’s assistance as a strong fighter. It’s possible that this is all it will ever be. The entrance of Maggie might alter that. A recently published table read from 2021 offers a glimpse of the confrontation, as well as Carol explaining to Maggie why Negan was necessary and what he accomplished.

Where do you place the responsibility for Glenn’s death on Daryl?

This article is a combination of a previous article from Ashley Dye and the current writer, updated.