When push comes to shove I want to enjoy The Walking Dead. I really do. I’ve been a long time fan of the comics, way before the show was even a whisper of an idea, and have invested a number of years into these characters and their story. I know Rick Grimes, Negan, Maggie, Carl, Michonne, and Andrea incredibly well at this point. I’ve shared in their losses and celebrated in their victories. It’s this knowledge that makes me want to see them represented in the best possible way when it comes to their on-air counterparts, but I’ve reached a point with The Walking Dead television show where I’m not entirely sure if that’s possible. Last night’s episode, “Dead or Alive”, was a frustrating affair that saw characters like Maggie walk in a figurative circle while characters like Negan completely contradict his entire character arc. And for what? For the story to make no forward progress and spend an hour spinning its wheels. At this point watching an episode of The Walking Dead is more frustrating than enjoyable.

I know that might not be a very popular opinion but I can’t help but feel that way. Maggie is a shining example of my frustration last night. For a while now we have been getting a Maggie who was willing to take a hard stance against the Saviors. She’s got her captives and is now killing them one by one sending the bodies to Negan telling him to stand down. That is some supreme badassery from a character who has literally lost everything in this war. Maggie is taking a stance and last night she furthered that stance by cutting the rations of the captives and not allowing them to have outdoor times. The food supply at the Hilltop is rapidly depleting and will deplete even faster now that the survivors from Alexandria have arrived, and Maggie put the good of her people over the need of her captives. It was a difficult decision that made sense and took up most of Maggie’s episode arc… until the end where she completely reverted back to treating the captives as people. Don’t get me wrong, I understand the decision as it allows Maggie to maintain her humanity, but it just felt like the entire episode was for nothing. Almost as if this was the epitome of spinning wheels. Here’s a conflict that could produce interesting character drama but let’s not give it time to breathe. Let’s just talk about it for an entire episode but go back to the way thing were by the end of the episode. No story progression. No character progression. Just frustration. 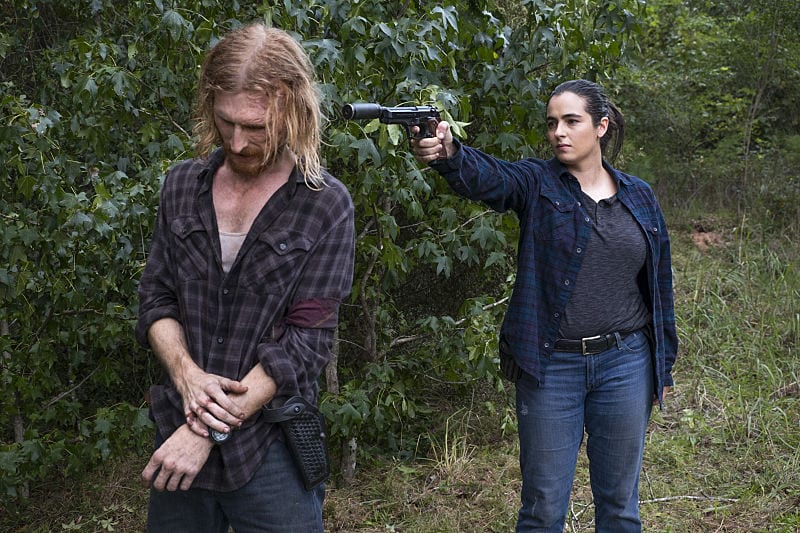 That was the largest problem with “Dead or Alive”, it ultimately resulted in a huge pile of “who gives a damn”. Nothing changed. Nothing happened. Tara was super pissed that Dwight was with them to the point where she tried to kill him the entire episode. And granted, she has every right in the world to be super pissed that Dwight is alive. He’s not a good man, and for those of you who want to argue that he is I’m sorry, being in love doesn’t negate the shitty things you do to other people. He’s a murderer. He’s a murderer for Negan. I don’t blame Tara for wanting him dead. Her attempts are so glaringly obvious though and ignore the fact that Dwight still serves some sort of purpose. Who cares, right? We can still fight Negan without Dwight’s insight, right? Wrong. Because when push comes to shove and Tara has an opportunity to kill Dwight she lets him join back with the Saviors so he can lead them away from the Alexandria survivors. Another story arc within the episode that goes nowhere because even though Dwight saves everyone… Tara is still pissed and wants him dead. She fails to see his worth to the group which leads me to believe if he joined the group again she’d try to kill him… again. The only purpose this served was to fill the time of the episode.

Don’t get me started on the fact that Siddiq, the character Carl sacrificed his life for, was out in the swamp killing walkers with Daryl. Are you kidding me?! Siddiq is supposed to represent Carl’s ultimate sacrifice. The willingness to see good in people. He freaking gave his life for it! But you’re going to have Siddiq in a situation where he could easily die fighting swamp walkers? How disrespectful to the memory of Carl is that? Shouldn’t Siddiq, the only doctor, be treated as a massive asset and not just anyone else. This man should be on the sidelines at all times proving his worth. Proving he was worthy of the loss of Carl’s life. It’s almost like the show willfully ignores the important things that happen within its story.

Case and point, Negan. Last week Negan gave this incredible speech where he called Rick out on all his nonsense, blamed him for Carl’s death, and proclaimed he was a better leader because he values people. People are an asset. The moment hit a number of emotional chords and had me thinking, not for the first time, that maybe Negan is the good guy here. Here is a man who knows how to lead or at least has a clear-cut vision of doing so. He doesn’t want to kill Rick’s band of survivors, as Negan’s told us time and time again, he needs them to build this new world. Rick is the problem. It’s the one characteristic that has stayed true for Negan since his introduction… until last night. Suddenly Negan, the man who sees people as an asset, wants everyone dead. While his zombie warfare idea is pretty gnarly it also completely negates everything about that the character. Let’s not kill Rick’s group but allow them to slowly turn into walkers so they kill each other. That’ll win us the war! Sure it might do that, but what happened to putting value into people? For needing them to build the world?  It’s this type of sloppy storytelling that makes me want to bang my head against a wall. 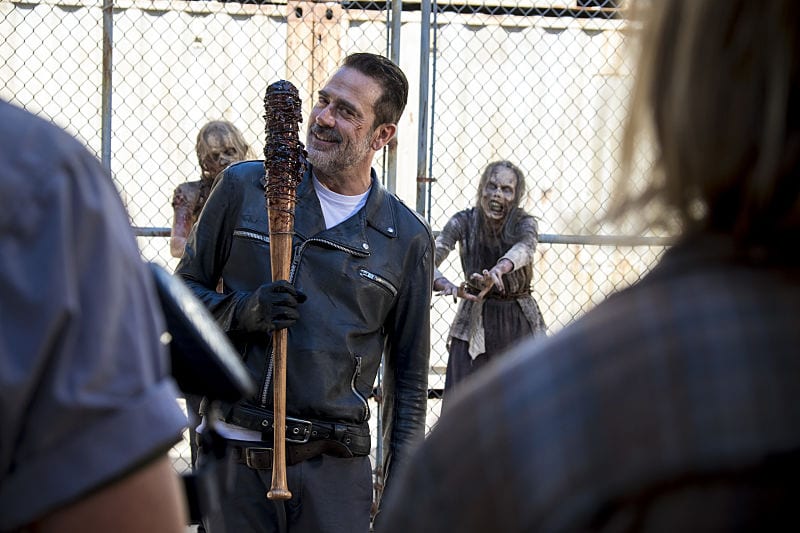 Not to be outdone we did have the hokey man of faith vs man of science storyline with Father Gabriel. The Walking Dead is a show that has no idea what to do with their man of faith. They’ve already built him up to the point where half the audience hates him and the other half could care less about him. Any emotional or philosophical impact that this character can have is gone leaving the show in a position where they don’t know if he should live or die. He just got scratched by a walker and it seems like he’ll be dead soon… nah, let’s just make him go blind but maintain the ability to shoot walkers in the head from long distances. The episode spends so much time proving the idea of blind faith, pun intended, that it all gets wiped off the board when the doctor and Father Gabriel are captured resulting in the strangest suicide on the show to date. Seriously, who shoots themselves in the heart? What is gained from this storyline? Father Gabriel still goes on blindly trusting god and the show continues to only allow one doctor to live at a time. Gabriel’s beliefs aren’t truly tested and the show moves on.

The only aspect of “Dead or Alive” that had any impact was Enid’s reaction to Carl’s death, but it gets forgotten in an episode that tried so hard to piss off its fan base. Maybe I’m being a bit harsh here, and maybe that’s because I want the show to be good. After a while, though you have to start asking yourselves, is this show actually good or are we projecting on to it? For me, The Walking Dead has lost its way and I’m growing more and more frustrated with that fact. I hope that a new showrunner for next year can change things around, I really do, but the larger question at hand is… who will be watching?

There you have it Geeklings, what did you think of last night’s episode of The Walking Dead? Does anyone feel the same way or am I being a bit too harsh? Sound off in the comments below. If you’d like to talk all things Walking Dead you can find me on Twitter @iamgeek32. In the meantime, here’s hoping that next week brings a better episode.