Fans of ‘The Walking Dead‘ TV show are, basically, broken down into two categories; those who have read the comics and those who haven’t read the comics. While the show does follow along closely to the story of the comics, for many story lines within the show, there are major differences from the comics. For example, and without spoiling anything, one character’s written death in the comics may, actually, end up happening to a totally different character on the show. Or, how about the fact that Daryl Dixon doesn’t even exist in the comics. Not everything is translated exactly from page to screen however, in the instances when the show wants to stick to the comics exactly, they do a pretty damn good job of it.

Let’s take Negan for example. Negan is one of the most infamous characters within ‘The Walking Dead’ universe and, his arrival on the show was one of the most anticipated moments in television history. This is a character that the show
needed to get just right.Right off the bat (see what I did there?), there were two major differences which fans noticed. 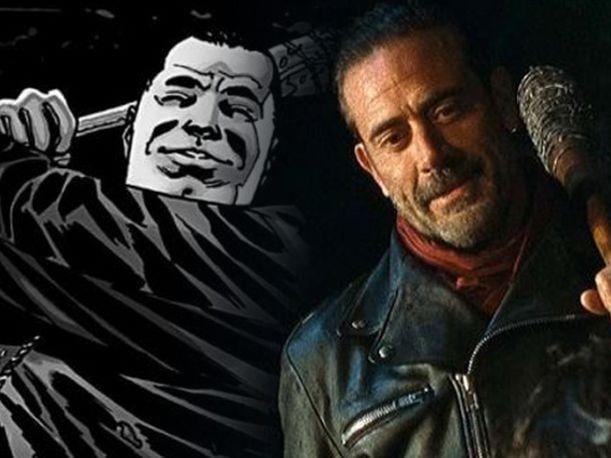 First, Jeffrey Dean Morgan had a beard where as comic Negan is clean-shaven. This is might seem like a minor difference however, many fans felt that a clean-shaven look is what separated Negan from the rest of the other Saviors. It sort of gave him a superior look and distinguished him from the rest. Jeffrey Dean Morgan has commented that, he was literally in the middle of shooting another show so, he could not shave for the role on ‘The Walking Dead‘. Beard or no beard, he did an amazing job so, we’ll let that one slide.

Secondly, the language was, we’ll say, timid for Negan. Fans expected this as the show does air on AMC and, there are limits to what can be said and shown on the network. We all know we’ll get to see full Negan in the blu- ray/DVD set of season 6. We’ll let this slide as well.

So, aside from those two differences, just how close was that final scene to what waswritten in the comics?

Earlier this week, Skybound The Walking Dead posted a side-by-side comparison of Negan’s dialogue in the comics versus his dialogue in the TV show. They also showed, page by page and screenshot by screenshot, just how Jeffrey Dean Morgan’s performance compared to the visuals of the comics. The translation from page to screen is pretty flawless (with the exception of the two differences we just mentioned). Not only was the dialogue pretty much exactly the same but, each and every camera shot and angle from that final scene was like a picture directly out of the comic book. Now, that’s why this show is so amazing.

Putting the cliffhanger controversy aside, what did you think of Negan’s grand entrance?

One thought on “‘The Walking Dead’ Comics VS Show: Negan’s Arrival”