It goes without saying that last night’s episode of The Walking Dead was an extremely heavy one. First, there was the loss of nearly the entire Kingdom army. Then we had to watch them all reanimate and try to kill  King Ezekiel, which was another gut punch. Unfortunately, those moments weren’t even the worst of it. In the episode’s closing moments, our beloved tiger Shiva sacrificed herself to a horde of walkers to save Ezekiel as he watched in horror. It was completely devastating and resulted in us all staring at our screens like this:

However, despite being an episode of heartbreak, fans of The Walking Dead were quick to find some distractions and humor throughout – mainly having to do with this Savior: 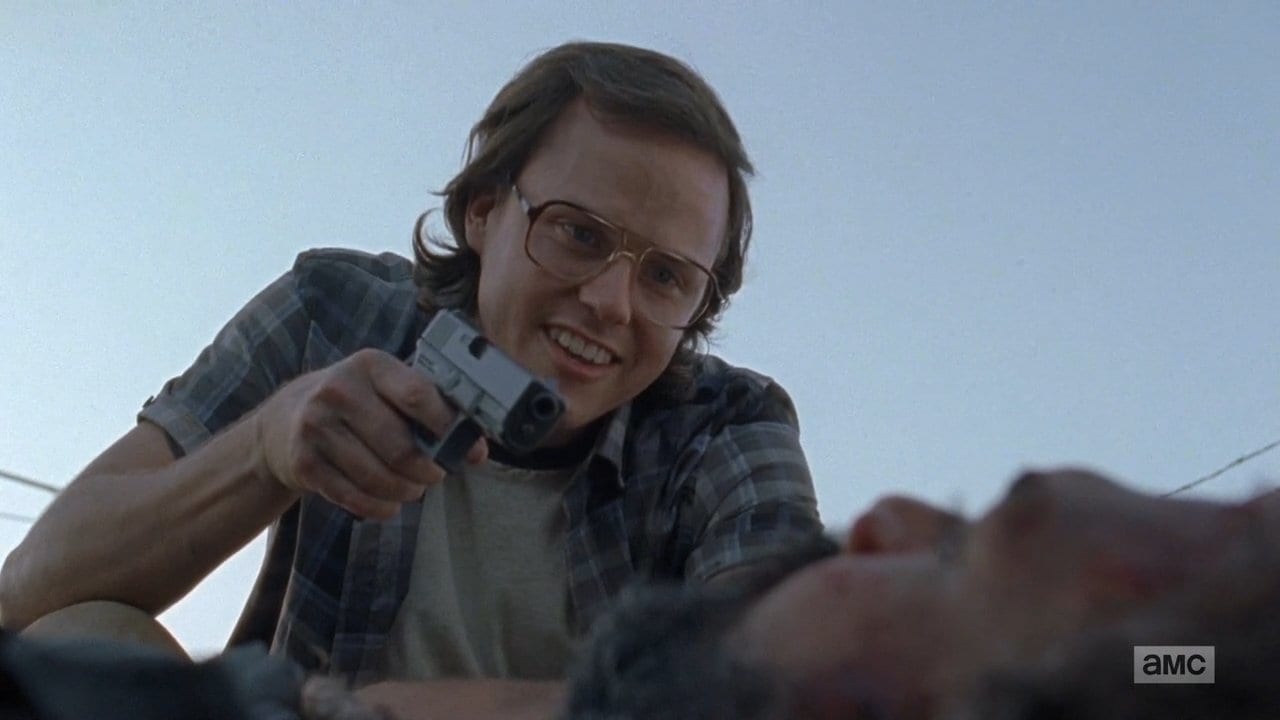 Thanks to Chris Hardwick on Talking Dead, non-comic book readers learned that this here Savior was named Gunther (even though he introduced himself to Ezekiel as Negan). Gunther hits the scene by first murdering Alvaro and then capturing a wounded Ezekiel to take him back to Negan. Now, this is all fine and well, he’s a Savior just doing what he’s been told to do, however, viewers couldn’t help but notice that Gunther looked and acted unlike any Savior we’d seen before.

Who is this clean cut nerdy Savior??? #TheWalkingDead pic.twitter.com/P8oMsH4hLz

Someone please tell this Savior it isn’t 1985 anymore. Jesus, even Eugene looks better than him & he has a mullet for god’s sake #TheWalkingDead

Almost immediately comparisons to notorious serial killer Jeffrey Dahmer were all over Twitter and even received a mention on Talking Dead by Hardwick.

Why does Ezekiel’s kidnapper look like Jeffrey Dahmer? #TheWalkingDead pic.twitter.com/8qUZ4hK6gq

Bizarre cameo from Jeffrey Dahmer in #TheWalkingDead but fair play to him for some how coming back from the dead to play such a pivotal role in the episode.

Okay but tell me why this guy on #TheWalkingDead looks exactly like Jeffrey Dahmer.

However, the comparisons didn’t stop there. Viewers then began giving other suggestions for who they believed Gunther was channeling and the results were absolutely perfect.

When a man who tamed a tiger got captured by Napoleon Dynamite #TheWalkingDead pic.twitter.com/duVOYTKmb4

Who thought it was a good idea to cast Kip as a Savior?? #thewalkingdeadpic.twitter.com/rVw5RKGhlj

There were some popular movie/TV dad references

Holy crap! The Cheerleader’s Dad from Heroes is also a Savior and captured Ezekiel? #TheWalkingDead

But why is Rick Moranis a Savior now? #TheWalkingDead

Ezekiel is saved by a Savior who walked right out of Office Space. #TheWalkingDead pic.twitter.com/RKo2lpzHTx

Of course, there were a few fans who felt that his look wasn’t the best of distractions.

Who is this savior who looks like a 80s serial killer? Oh wait we don’t care, Jerry your timing is perfect. #chopchop #jerrytotherescue #TheWalkingDead ‍♀‍♂

This character seemed out of place for the apocalypse. Didn’t really seem like a savior. #TheWalkingDead

Like, Glasses dude? That’s just comically bad evil. It takes me out of the show because it’s so ridiculous #TheWalkingDead

Overall, I think that we can all agree:

Thankfully we didn’t have to watch Gunther torture Ezekiel for too long as Jerry showed up and sliced him in half using his iconic battle ax.

What were your thoughts on Gunther? Did he remind you of anyone?

More on The Walking Dead:

‘The Walking Dead’: The Best Tweets from “Some Guy”

Home » Fandom » ‘The Walking Dead’: Can We Talk About Gunther the Savior Real Quick?