Fight the living, fear the dead. That’s the motto from The Walking Dead and it appears that it will be applicable to its former star’s newest role. Andrew Lincoln, who played Rick Grimes on The Walking Dead,  is now starring in the theatrical performance of A Christmas Carol, once again encountering the dead… ghosts! Now, we’ve got some great first images of the production!

Lincoln is playing Ebenezer Scrooge in the Old Vic’s annual production of A Christmas Carol. The performances began on on December 12 and will continue through the 24th.  The production is the largest live streamed show mounted during the pandemic, making use of a full, socially-distanced cast. [Featured image: Old Vic, via Twitter]

‘Life turns in directions we know not’

Here are some first images courtesy of Playbill. 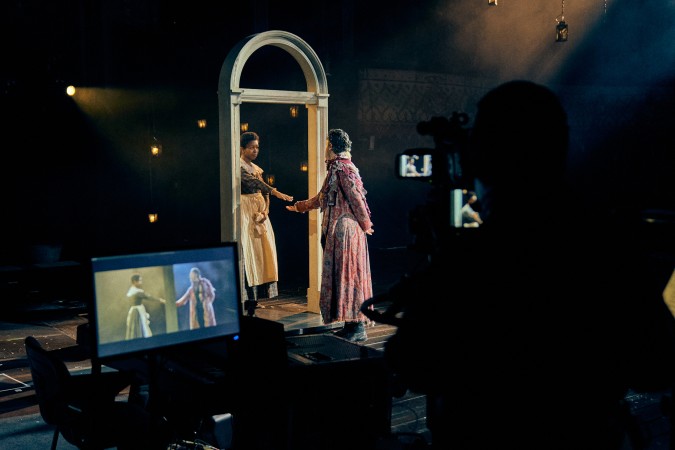 Andrew Lincoln steps into the shoes of Scrooge, but Lincoln will do so in an empty theater but it will be televised. It’s part of the Old Vic’s ‘In Camera’ series, which has already plays starring Claire Foy and Matt Smith in Lungs, and Andrew Scott in Three Kings earlier this year.

A Christmas Carol will be screened across sixteen performances from December 12-24, with 5000 tickets for each performance up for grabs. The Old Vic are also offering the show free to care homes around the country, and local schools, which is a really lovely gesture. Tickets are on sale now – find them here.

According to Secret London, theater bosses don’t expect to make a profit from this massive production – an incredible show of generosity and selflessness at a time when the theater industry is struggling more than most. The Old Vic has been helped by a long-awaited £3 million emergency subsidy from the government, but you can also support their immeasurable contribution to London and the arts by donating here.