Please be wary when reading this post if you haven’t seen episode 803 of The Walking Dead.

The All Out War has seen many casualties so far. Francine, Morales, and countless saviors met their demise early on this season, but episode 3, Monsters, saw the first major death, Eric.

Eric was shot in the stomach during last week’s outpost battle and although he had an exit wound, it was too late. Eric fought until the end. He knew that the time to act was now and he let his courage shine through.

One thing that has shone brightly over the years is Eric’s relationship with Aaron.

“It goes all the way to the bottom of our relationship, which has surpassed all of the muck that we’ve gone through. The world has gone to hell, but our relationship has been there and it has been stronger than either of us or anything else around us, and that line for us really brought everything back home and said, ‘This is what it’s all about’ Jordan Woods-Robinson said in an interview with EW. “And our last scene was a mirror of the first scene of us — of meeting and one of us being injured, and me having the slightly comedic passive thing of ‘everything’s okay.'” 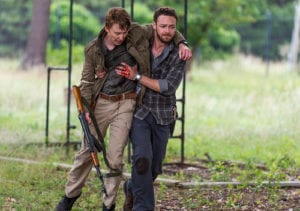 Their relationship was beautiful and even though it ended way to soon, “you can still see that relationship there being stretched out. I think that is equally beautiful and horrifying that Aaron didn’t get that sense of closure. We did get a nice goodbye and I think at the end of that we were both prepared to have that be our final goodbye. But then it all comes back around and we see him not getting to get that final act of closure, and I have such mixed feelings about that. I think it’s so beautiful and I think it’s awful.”

Aaron didn’t get to put Eric down, he only saw a zombified Eric lumbering away. 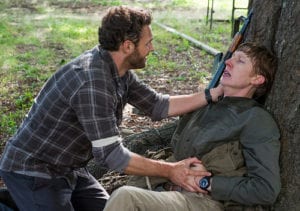 “I feel so bad for Aaron because that’s just something that can break a person. And we might see that in the next couple episodes with the character wrestling with that knowledge — kind of like we saw with Lennie James’ character back in the beginning of the series, that he’s out there and he’s looking for his wife and he’s a broken man and he doesn’t know where to turn next because he knows that his partner is out there, even if it’s not the real version. Even if it’s just imitation, that person is still out there and still roaming the world.

Eric’s death was a huge shock to us all and he will be missed.

Scott M. Gimple is Ready to Tell You Who’s Been Cutting the Grass on ‘The Walking Dead’

Home » Featured » ‘The Walking Dead’: All Out War Victim Speaks