Andrew Lincoln is known worldwide as Rick Grimes, star of The Walking Dead. For nine seasons, nearly an entire decade, Lincoln appeared on the biggest cable show ever.  Merchandise for The Walking Dead has Lincoln’s face pasted on everything imaginable. If you don’t know Lincoln for his role as Rick Grimes, then you probably know him as the loves-struck young man who stood at the door with giant poster boards that expressed his affection for a girl in Love Actually. Yet there are some other great shows that you can catch Lincoln in and we have seven of them for you!

Based on the novel of the same name by former British SAS officer Chris Ryan, this programme follows the exploits of two ex-military men in the present day, bound by a tragedy that happened in their pasts. John Porter is a former SAS sergeant, and Hugh Collinson is an ex-MI6 agent. Years after the tragedy that brought them together, they are called upon to right wrongs around the world. In Strike Back, Lincoln plays Hugh Collinson, Porter’s comrade.

The main characters of the programme are the psychic Alison Mundy (played by Lesley Sharp) and the academic who becomes involved with her due to his skeptical interest in the paranormal, Dr Robert Bridge (Andrew Lincoln). Set in Bristol, each of the six one-hour episodes of the first series sees Alison become involved in the appearance of a spirit and attempting to discover why it has come back to haunt the living. Robert becomes involved in the first episode, when Alison first moves to Bristol and her activities inadvertently result in the suicide of one of his students. 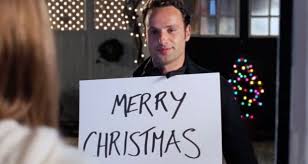 Nine intertwined stories examine the complexities of the one emotion that connects us all: love. Among the characters explored are David (Hugh Grant), the handsome newly elected British prime minister who falls for a young junior staffer (Martine McCutcheon), Sarah (Laura Linney), a graphic designer whose devotion to her mentally ill brother complicates her love life, and Harry (Alan Rickman), a married man tempted by his attractive new secretary.

Following the chaotic lives of a group of perpetually juvenile teachers, whose specialty subjects include beer-drinking, kebab-eating and ineptness with members of the opposite sex. Lincoln plays a teacher named Simon.

A group of trainee solicitors and rookie lawyers in their twenties share a crowded flat while trying to launch careers in the offices of a London legal firm. Lincoln plays Edgar aka Egg.

Wuthering Heights is a 2009 two-part British ITV television series adaptation of the 1847 novel Wuthering Heights by Emily Brontë. The episodes were adapted for the screen by Peter Bowker and directed by Coky Giedroyc. Lincoln plays Edgar Linton – Edgar is well-educated, refined and wealthy, everything that Heathcliff isn’t.

There’s a lot more to chose from on Lincoln’s IMDB page, including a movie that just came out called Penguin Bloom, which is available on Netflix.  It also stars Naomi Watts and it’s about  family takes in an injured Magpie that makes a profound difference in their lives.

NEXT ARTICLE: Andrew Lincoln almost didn’t play Rick Grimes on The Walking Dead. Another actor was actually awarded the role first and then had to turn it down!

Home » Featured » The Walking Dead: 7 other Films and Shows to Watch Andrew Lincoln